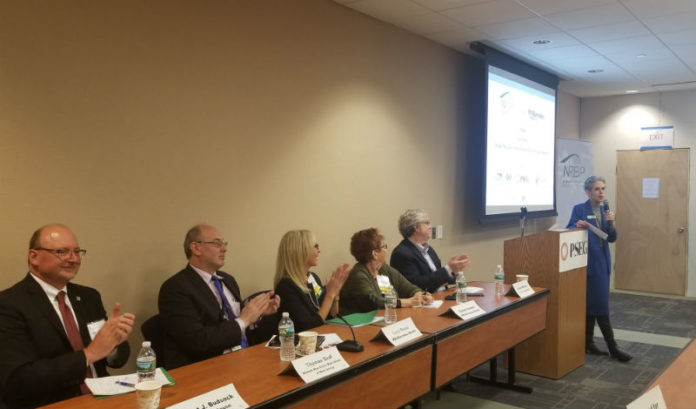 New Jersey’s expansion of uses for medical marijuana, and potential legalization of recreational marijuana, could have significant implications for certain employers and sectors in the state.

“New Jersey is not only split on marijuana, but we’re getting less supportive,” compared with the rest of the country, said Rick Thigpen, vice president of state governmental affairs at Public Service Enterprise Group.

He addressed a crowd of about 100 at a Newark Regional Business Partnership event Wednesday that included a panel on the topic of opioids and marijuana and how the two affect employers.

The panel consisted of health care organizations in the state, including Horizon Blue Cross Blue Shield of New Jersey, Integrity House, Quest Diagnostics and RWJBarnabas Health, all of whom addressed the opioid issue and how they are individually dealing with it from a health care standpoint, as well as how they handle it as employers.

But the state Department of Health’s expanded uses for marijuana could be problematic for a number of industries that require drug screening on a regular basis or require pre-employment testing.

“The issue of working while impaired doesn’t go away,” Graf said. “We would handle it the same way we would think of a patient who might be using alcohol inappropriately. We don’t randomly test people, we just test pre-employment. If it comes up on a test, even with a prescription, it probably doesn’t preclude you. If you seem to be working while impaired and we test you, and you turn out to be above the legal limit, that’s going to have legal implications for your job. I think that’s the only way we can manage it.”

And, with the state eyeing recreational legalization, Graf believes the conversation could focus on addictive drugs and the normalization of them as a result.

Robert Budsock, CEO and president of Integrity House, said the organization will be monitoring on-the-job use.

“We recognize that medical marijuana is something that could be used for legitimate concerns. We have to make sure that the use of the medical marijuana does not impact the performance on the job. In other words, they may have to use it at a time where they are not working,” he said.

As for whether or not insurers will, as a result of the state’s medical expansion, cover medical marijuana, Graf said that depends on the Food & Drug Administration.

“Currently, there is some evidence of the effectiveness of marijuana on (nausea and pain) in cancer patients. So, those will likely be the first things we would approve use for, but that’s going to follow the process we use for any FDA-approved drug,” he said. “It’s going to need specific indications and strong evidence to support it.”