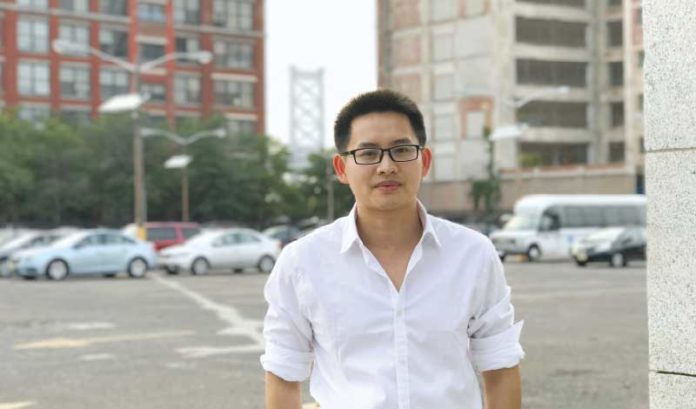 Entrepreneur Khai Tran’s labor of love is turning the beleaguered city he grew up in — Camden — into a startup hub.

But, as he’s often told, the trouble with the place he was raised after emigrating from Vietnam is that Camden hasn’t had a small venture become something much more, and in so doing give birth to other startups.

So, more than simply turning a respectable profit, Tran’s latest enterprise is trying to be that turning point for Camden.

Late last year, Tran launched Penji with co-founder Johnathan Grzybowski, a South Jersey schoolmate of his. The online business they started, which is disrupting the graphic design industry’s business model with an original subscription payment plan for design services, is only the most recent of Tran’s endeavors to make Camden a Silicon Valley-like technology mecca.

The young entrepreneur also last year led the launch of one of the city’s few co-working spaces, Waterfront Lab. The founding of those spaces and the larger economic development organization Waterfront Ventures was inspired by an experience he had while running another business he started only a few years before that, an online tech startup-focused publication.

“We at the time wanted to test the water to see how diverse the ecosystem for entrepreneurs was in Camden, so we hosted a startup tech conference, which I didn’t anticipate a lot of people would show up to,” Tran said.

Tran said he expected maybe 40 participants for the conference. Later, he thought it was too ill-fated to even bring in that many people — and so he dropped it. But, when he forgot to close the signups for the event online, he came back to find it had amassed close to 300 RSVPs.

About that many showed up to network with a surprisingly large pool of local entrepreneurs — both established and would-be — at the Waterfront Technology Center on Camden’s Federal Street. Even with all the discomfort of being in a poorly ventilated venue already more than 100 people over capacity, Tran felt comfortable calling it a success.

“And I really saw the potential that day,” Tran said. “And, myself being from Camden, it was very inspirational to see all the people from the city interested in this.”

Inspired as he was, Tran got something of a reality check about what it would take to energize the Camden startup ecosystem during a later competition created by Waterfront Ventures. The contest was trying to promote local startup growth by awarding funding to the entrepreneurs with the strongest business pitch — with the understanding they would set up shop in Camden.

“But there were two main questions we got from people during that: Even when these companies are attracted to here, how can you be assured they’ll hire from Camden? Also, are you hiring from the city?” he said. “Truthfully, we had disappointing answers for both.”

Camden does hold an appeal for businesses that can be lured by financial incentives — and the tax breaks offered as part of larger revitalization efforts help that — but, as Tran realized, there existed a challenge that hampered the city’s prospects from a startup ecosystem perspective.

“The fact is, it’s much easier to find talent outside of South Jersey,” he said. “That — and because of its reputation as a violent city that also ranks among the poorest, as well — makes it so that when I tell people about launching a startup, they’re always surprised to hear it’s in Camden.”

So, when Tran went on to launch Penji, he did so with a group of students from underserved Camden communities.

“It was a bit of a gamble,” he said. “But we’ve quickly found that they have a lot to prove — and they’re very committed to their work.”

As Penji has grown in the half-year it has been active, Tran has set an objective of hiring 100 students from Camden by 2019. Right now, the startup is pulling in employees from a vast pool of talent offered up by a Camden nonprofit job training organization.

At the same time, he has a goal of doubling its customer base to 500 subscribers through organic growth. Businesses and organizations pay a monthly fee for on-demand designs for business cards, logos or other marketing materials done by Penji’s staff.

Tran, like any good entrepreneur, is full of goals. He still wants to bring more than 100 tech startups to Camden through his Waterfront Ventures project. And his for-profit business has a part to play in that, too.

“We see Penji as a main platform for people to come in and work within our company and also get experience while building connections,” he said. “That can lead to other endeavors. With every employee, encourage them to have a goal that involves something more than working with us. Hopefully these opportunities lead to more businesses, and hopefully in Camden.”

Propelify is where ideas take flight: Catch some of the must-see...