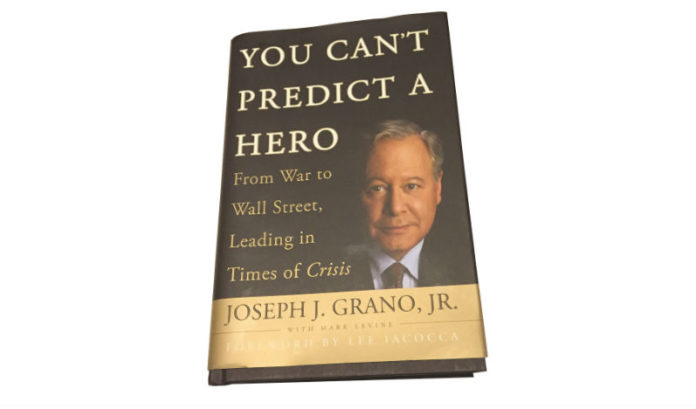 The speech was short (maybe two minutes or so) and the message was simple (metaphorically use these three arms movements to guide your life).

The hope is that it was profound.

If just a few of the three dozen or so scholarship winners at the annual Cento Amici awards dinner truly understood it — and used it as a roadmap for their continuing studies and life journey, then Joe Grano will have once again did what he does best: inspire people.

“Reach, lift and embrace,” he said.

Grano, best known as a Wall Street legend who was the first CEO of UBS Paine Webber, wasn’t talking about his leadership during 9/11. Or his time as a Green Beret in Vietnam. Or his work at Homeland Security. Or any of his numerous charitable endeavors.

He was trying to instill a sense of work ethic, philanthropy and pride in the next generation.

Reach, he said, was about being ambitious. Having a goal and figuring out how to reach out.

Lift, he said, was about bringing up those behind you, especially those less fortunate.

Embrace, he said, was about patriotism, recognizing that the U.S. truly is the land of opportunity.

“If you can remember for the rest of your life those three arm movements: reach, lift and embrace, I can assure you that you will come home one day, look at your face in the mirror and say, ‘I made a difference.’

“I like what I see. I’ve stop wanting and started living.”

The audience of Cento Amici members and the students (those who earned scholarship assistance to both high schools and colleges) seemed to get it.

Afterward, they lined up to get autographs of Grano’s book, “You Can’t Predict a Hero: From War to Wall Street, Leading in Times of Crisis,” exchanging a few words in the process.

Grano, who lives in Harding, said he hopes some will take his remarks as words to live by. Because, he said, they helped guide him.

“Look at me,” he said. “I only had three months of college and I became chairman of one of the biggest firms in the world. I have to admit, only in America.

“That’s the point: In the United States, anything is possible.”

“Those analogous hand movements can direct your life,” he said. “If you’re aspirational, you reach for the stars.

“And I think people who succeed in this nation need to give something back. I believe in lifting those who are less fortunate.

“I’m not into supplementing them to sit on their butt, but I am a person who says we have a moral obligation as a nation to take care of people who can not take care of themselves. But those who can, we must insist that they do.

“And we must embrace the United States. I’m a patriot. We’re not perfect, but we should get positive reinforcement for our citizens and constructive criticism. Not the nonsense going on now.”

The words were meant for the students. But they also applied to the various top-level business executives in the room, supporting a charity that has donated more than $1.5 million in scholarship money over the years.

Words to live by.

If you would like to help the charity, please go to www.centoamici.org.

Cashless society: What kind of future, and how inevitable?