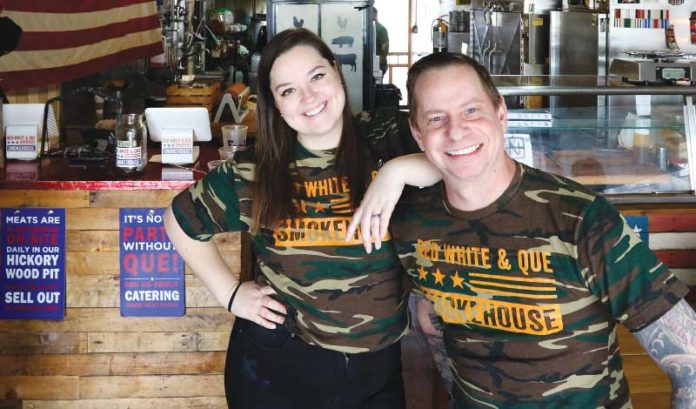 Red White & Que Smokehouse — just recently a fast-growing barbecue joint with nine nationwide locations — has shrunk back down to a single restaurant in Kearny.

But this is hardly a story of a family-owned business that grew too fast.

In fact, co-owners Katie Misuraca and Dan Misuraca said it’s what they realized they really wanted.

“Why go to this big, shiny place where everyone wants something that they had all along?” Katie Misuraca said. “It always was just about Dan and I making barbecue and keeping it simple — and, for us, the whole beauty and authenticity of barbecue is in its simplicity.

“For us to change that wouldn’t make sense with our brand.”

Citing disagreements over expanding the menu, the Misuracas sold eight of their nine restaurants to their partner, Edward Danberry, last month.

The couple now commit all of their time and energy to the original Red White & Que location — one that they barely had the time to get cooking before their brand expansion took off.

“Dan and I had only been in Kearny a year before we started the partnership,” Misuraca said. “So, to be able to come back and refocus without having to worry about managing several other locations, that in and of itself is a bonus for us.

“We are no longer distracted, and are more than happy to return to the roots of what our business really is and was always meant to be.”

That is, a truly authentic small American business.

When his four-year tour with the  Marine Corps ended, Dan Misuraca, originally from Florida, began working in retail management with Journeys shoes, where he met his wife, a Howell native.

The couple began dating in 2012 and bought a home — and a smoker — together in 2014 to begin backyard barbequing.

It was a hobby they really grew into.

“We felt like we could potentially fulfill our dream of starting a mom-and-pop barbecue shop and make a living this way,” Katie Misuraca said.

The Misuracas cashed in their savings and began taking classes with the Small Business Administration before quitting their retail jobs and venturing into the restaurant business.

Once they threw in some slow simmered collard greens with ham hock, homemade barbecue sauces, jalapeno cheese cornbread and two communal tables, the couple had themselves one of the hottest Southern barbecue joints in central New Jersey.

“We were named ‘Best BBQ Newcomer’ by NJ.com and ‘Best BBQ in New Jersey’ by Thrillist that same year,” Dan Misuraca said.

The Misuracas would open their second location in Scotch Plains a year later by partnering with Danberry, a prior customer, disabled veteran and principal at Group One Investments.

“Our partnership with Ed was great,” Dan Misuraca said. “His team brought a lot of experience, knowledge and mentorship, and they sure learned a lot from us about barbecue.”

Red White & Que quickly grew into a multimillion-dollar collection of small barbecue restaurants around the state, with locations in Randolph, Manahawkin, Barnegat, Little Egg Harbor and Wayne, and across the country, with locations in Easton, Pennsylvania, and Brentwood, California.

The plan was to have 55 nationwide locations by the end of 2019.

How it would get there ultimately led to the undoing of the partnership.

According to the Misuracas, Danberry and his team wanted to change and add some items to the menu that, from the Misuracas’ perspective, would make the brand into a chain.

“Our vision always had been to have a mom-and-pop-type establishment in every city,” Katie Misuraca said. “We wanted every location to feel as simple and authentic as the one we had at home.

“Had there not been these types of disagreements, I do think we would have continued the partnership, because we were keeping everything true to our vision, one location at a time — until we weren’t.

“That’s when we realized, hey — maybe we don’t actually want a partner. Maybe we just want to be able to do everything our own way.”

By sticking to the original recipe.

The eight former Red White & Que locations have now been rebranded as American Heroes Smokehouse BBQ — and the menu has indeed changed.

While both Red White & Que and American Heroes continue to offer smoked meats by the pound, Red White & Que does just fine with its smoked baked beans and creamy potato salads, while American Heroes felt the need to diversify, for example, with kids menus (including hot dogs and chicken nuggets), smoked turkey, tacos, black bean and corn salads, a soup of the day and fried cheesecake.

“They’ll of course have similar menu items, but they certainly have separated and distanced themselves from what it is we do,” Dan Misuraca said.

While American Heroes is now Red White & Que’s competitor, he added, there are no hard feelings — and there are no trade secrets to be had.

“Barbecue is not exactly an artistic expression,” Katie Misuraca said. “It’s more of a science than anything else.

“The recipe for brisket needs salt and pepper, but it also is about the time, temperature and passion. If you don’t have the discipline, it really doesn’t matter what the recipe is if the execution isn’t right.”

As for the house-made barbecue sauces?

Additionally, now that the Misuracas are managing just 12 employees at Red White & Que, the team also has time to indulge in the creation of daily specials.

“The best part about ending the partnership — aside from any kind of monetary value — was staying true our vision and coming back to doing what we do best,” Katie Misuraca said.

That includes participating in as many community events as they can, Dan Misuraca added.

“This is a classic Americana town where people’s roots have been entrenched for generations,” Katie Misuraca said. “We feel like we have town appreciation in spades right now and we want to pay that forward.

“We know, now, that the heart and soul of our business is really the local people surrounding us. They get on board and support our vision, especially now that they see us working here every day, and they tell all of their friends to come in, too.”

That, Dan Misuraca said, is something you will never get from a chain business.

“To us, there is a lot more value in being a small mom-and-pop business,” he said.

Make no mistake — Red White & Que is on track to be just as successful as it was before, selling nearly 100 tickets per day and on pace to soon achieve nearly $1 million in revenue.

“As much as we are all about our local, repeat customers, we also do get a lot of new customers from those now driving a half-hour to get to us,” Katie Misuraca said. “We have since become a destination spot now that we are the only location left.”

The couple has indeed considered expanding — or relocating — but only in Kearny, Dan Misuraca said.

“There is still so much that can be accomplished here at this spot, and we have barely scratched the surface,” Katie Misuraca said.

However, she added, the couple also have rarely been known to turn down a good opportunity — such as another brand expansion.

“We know that what we are doing works, and we feel confident and proud of everything that we’ve done,” she said. “But we also know the sacrifice of time and energy that comes along with a commitment like that.”

One thing is for certain, Dan Misuraca said: His best partner is his wife.

“Partnerships are a tricky thing,” he said. “Everyone has opinions, and everyone believes in their own. Ultimately, you always want to be loyal to yourself.”

For more information, go to: redwhiteandquesmokehouse@gmail.com or call 201-998-2271.