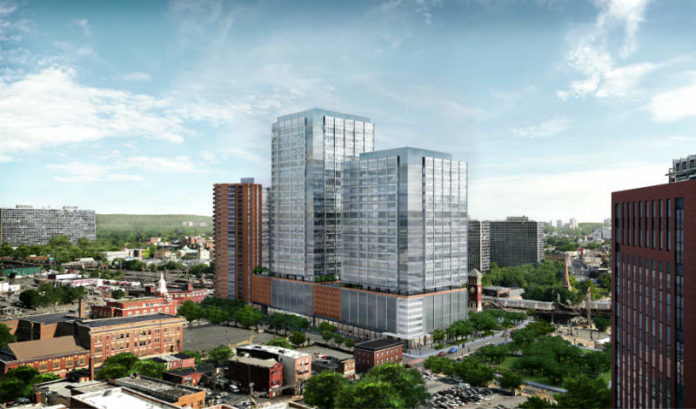 With its vast amount of dark fiber — which creates some of the fastest broadband speeds in the world — any new project in Newark is sure to catch the eye of those in that sector.

Jeff Schotz, senior vice president of SJP Properties, certainly knows that to be true with the company’s history in Newark. But he also knows something else: Newark is about more than just tech.

“We obviously think technology is going to be a big component of the future of Newark,” he told ROI-NJ. “But when you think of the city and you think of companies such as Prudential, Broadridge, Mars and Panasonic, it really shows that Newark has a really large cross-section of industries. And we think that will continue.”

Indeed. The corridor already is anchored by Audible, IDT, Cablevision and Genova Burns and is close to both New Jersey Institute of Technology and Rutgers-Newark — as well as a number of health care and hospital facilities.

That’s why Schotz thinks there are so many possibilities for the site, which potentially will include office, retail, hotel and residential components on 3.7 acres in the North Broad Street District.

“We think there are a number of possibilities,” he said. “Geographically, you can look at Mars coming from the west, which is a new phenomenon. And we also see people coming from New York City. And, since it’s a transportation hub, companies that need to bring in a large number of employees will be able to.

“This will be an anchor on the North end of town and it’s a big-time opportunity for everyone involved.”

The site will be anchored by a large public plaza intended to catalyze the area around University Avenue and Orange Street, while connecting to the New Jersey Transit commuter and light rail services at the station.

Newark Mayor Ras Baraka said the development is just the latest development success for the city.

“Creating ‘transit villages’ around both of our train stations is a high priority for my administration,” he said in a prepared statement. “This strategy increases public transportation ridership, reduces automobile air pollution and creates more affordable housing and vital new neighborhoods. Redevelopment of the former Westinghouse site accomplishes these goals.

“It will accelerate the momentum underway with development around the Broad Street Station and be an important part of the smart development propelling Newark’s attraction as a national business hub.”

The project is just the latest high-profile effort in the city by SJP, which played a major role in the headquarters tower for Panasonic and the new Prudential Financial headquarters. The firm partnered with Matrix Development Group for the Panasonic building, while acting as a third-party developer for Prudential.

Steven J. Pozycki, CEO of SJP Properties, said his company is eager to do more in Newark.

“Under the leadership of Mayor Baraka, Newark has definitively established itself as a city on the rise, with a growing number of corporations realizing that Newark offers exceptional access to a highly skilled workforce, and accessibility via a robust public transit network and direct access to the (Interstate) 280 corridor,” he said in a statement.

“This redevelopment site presents a unique opportunity for companies looking to position themselves within the booming North Broad Street District, directly across the Midtown Direct train line and among the numerous cultural, educational and retail opportunities that downtown Newark has to offer.”

“We have long recognized the redevelopment potential of the former Westinghouse site, and saw SJP Properties as the ideal partner to deliver a world-class development that will attract the right mix of high-quality tenants to this area of downtown Newark,” he said in a statement. “This property’s exceptional transit-oriented location positions it as one of the best development opportunities in a city currently experiencing an unprecedented revitalization.”

Schotz said SJP continues to be bullish on Newark and transit-oriented locations — two factors he said made the company eager to do another project.

“We think this is one of the best transit-related locations in the entire state of New Jersey,” he said.

And in one of its best cities to do business.

“We believe in Newark, we believe in the direction Newark is taking,” he said. “And we believe very strongly in Mayor Baraka and what he’s doing. The economic engine that is Newark is a big influence on us to continue to develop in Newark.”

According to the developers, companies that locate to the property will be eligible for New Jersey Economic Development Authority incentives, such as the Grow New Jersey program.