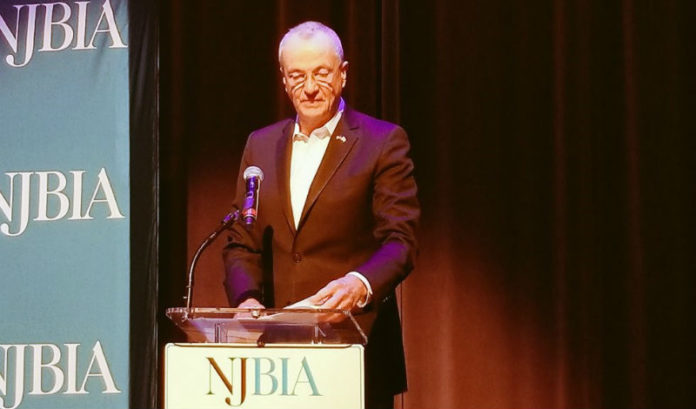 Gov. Phil Murphy and Audible CEO Don Katz touted the surge of economic development in Newark, as well as the unique approaches needed to boost a city such as Newark, to a large crowd Monday at the New Jersey Performing Arts Center.

“Economic progress cannot be made without social progress,” Murphy said. “This is a city that has not ignored its roots or its people, and it is creating an entirely new energy off the recognition that those who stayed and fought for a better Newark were on to something.”

Murphy said that was especially true in the pursuit of Amazon’s second headquarters, for which Newark was one of 20 cities to advance to the second round.

“That’s why no one is laughing … at Newark’s prospects of landing Amazon’s HQ2,” he said.

Murphy and Katz were speaking at NJPAC, during an event co-sponsored by the New Jersey Business & Industry Association and Audible, called: “A Tale of Tech Cities: Innovation & Urban Revitalization.”

They both noted how major corporations have helped build Newark to where it is today.

That includes Audible, which came to Newark with 100 employees and no economic perks and has grown to 1,400 employees — with more openings still available, according to Katz.

“We figured out how to hire all kinds of Newarkers into the tech org,” he said. “That got us to look past traditional resumes. People whose lack of privilege and background didn’t make them an obvious on paper, and we figured out how to train them to join jobs, and our customer care division just brims with all this positive energy.”

And Audible remained cognizant of the fact that many residents were not exposed to a big business environment, which meant not having a certain level of vocabulary.

“It’s like a word gap for children, and that resumes and things like that are not part of their purview, which leads to the reality that African-American college grads have two times the unemployment rate of white college grads,” Katz said.

“That’s one of the problems in the city with too much glass and steel,” he said. “You’ve got to stop the fortress stuff, (stop) being inside. So, all these people come out.”

Katz said that led to the idea of attracting Barcade, from Brooklyn, to open a location in Newark.

Murphy said the state has what it takes to have a flourishing economy.

“Let’s exploit our reality,” he said. “This state has everything the innovation economy needs to flourish. Now we are preparing to take the steps to ensure that companies that bet on New Jersey will find the best bet they ever made.

“Reclaiming this space will also take our mission of realigning economic development to promote smart planning in our urban centers and taking full advantage of our transit hubs and our density to create a new ecosystem more inviting than the innovation in tech sectors.”

Are you ready for in-person events? NAIOP N.J. is, starting June...