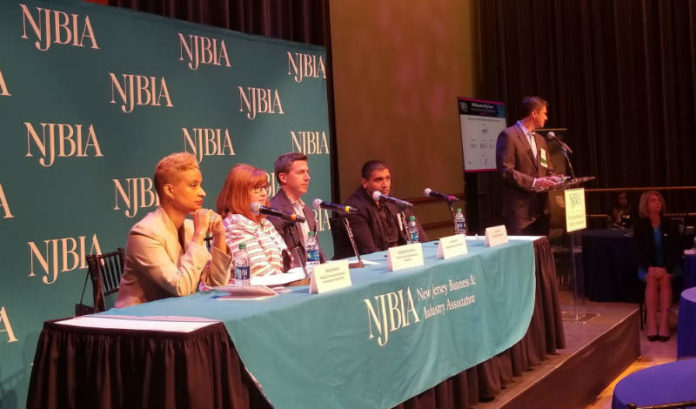 The New Jersey Business & Industry Association and Audible hosted an event Monday at the New Jersey Performing Arts Center in Newark that focused on urban revitalization and innovation, attracting politicians from the region and officials from some of the city’s largest companies.

In its quest to attract Amazon‘s second headquarters, the city’s officials have touted many of Newark’s hidden treasures, including the dark fiber network, the existing supply of large and invested companies — including growing interest from developers — and research and startup institutes within the city.

And, despite the known traffic woes of its arterial roads, the city can boast a strong population density, as well.

“We’re built for this. We’re built for Amazon — and for the next Amazon,” said Aisha Glover, Newark Community Economic Development Corp.’s acting CEO and president.

Here are some topics that were touched on during the discussion at the event, entitled “A Tale of Tech Cities: Innovation & Urban Revitalization.”

Aisha Glover: “We have the infrastructure and the capacity to handle a company (Amazon’s) size that’s bringing 50,000 jobs. But … we have to be mindful of transportation issues with that infrastructure and, so, even though even though we were at that peak population (half a million residents) at some point, what would it physically look like to have 50,000 additional bodies taking mass transportation, walking the street, needing to identify adequate housing and so on and so forth. I think at the end of the day, starting with a certain level of infrastructure will certainly help, but making sure that those conversations and public-private partnerships are actually there — because that’s the other side of the infrastructure that’s needed — how can we actually make this happen, plan for it and make sure it’s purposeful and intentional? You’re ramping up. It’s not ‘drop here, there’s 50,000 jobs tomorrow.’ And none of these sectors can have these conversations alone, so — back to what the governor was saying earlier and what Don (Katz, CEO of Audible) was saying as well — the way that you’ve seen the community mobilize around the HQ2 effort is really indicative of what really needs to happen in order to prepare for an Amazon or another company of that size.”

Jonathan Cortell, vice president of L+M Development Partners: “The human beings that comprise this market are its greatest asset … so much of New Jersey and Newark’s future lies in the presentation of its people and resources that are here. The job we have to do is dissuade people of the misinformation they have been sort of enjoying for too long. L+M is a New York business and it took me something of a task to persuade my colleagues to get past the misinformation that they relied upon (for) their decision-making, which was that New Jersey is not the equal of New York. My experience in New Jersey has encouraged me to buy a home here and stay here. I imagine my office is surprised by the number of my colleagues who are now following my lead.”

Jay Bhatti, co-founder, BrandProject LP: “I think if anyone has taken a look at Bell Labs … it’s becoming a really interesting ecosystem — not as much on the consumer side as Newark, but more on the enterprise and tech side. I know Asbury Park is doing a lot of work, working very closely with the folks at Princeton University to try and get more of an entrepreneurial hub going over there, and also with some of the people at Rutgers University. It’s not about the state, it’s about the community. I think it’s about building those communities; we’re starting to see them mushroom up. One of the things we talk about that would be great is if Newark was known as the consumer tech capital, and Holmdel was the enterprise capital, and Asbury for creative tech. There are those things that are mushrooming up that is very exciting.”