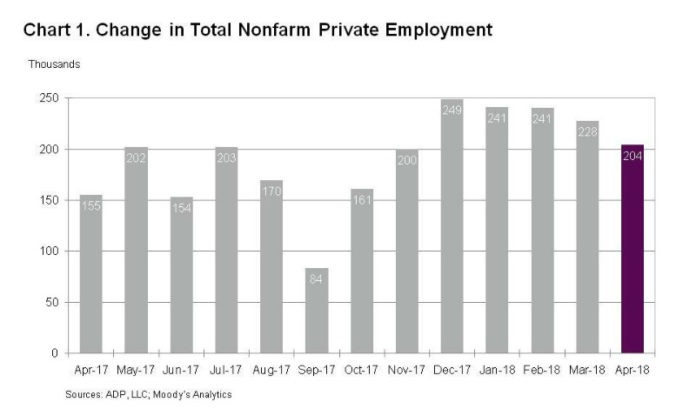 Private-sector employment grew by more than 200,000 jobs in April, according to Roseland-based ADP, topping the benchmark for the sixth consecutive month.

The payroll and human resources company said its monthly ADP National Employment Report found that the number of jobs grew by 204,000 positions from March to April.

“Despite rising trade tensions, more volatile financial markets and poor weather, businesses are adding a robust more-than-200,000 jobs per month,” Mark Zandi, chief economist of ADP’s partner in the report, Moody’s Analytics, said in a prepared statement. “At this pace, unemployment will soon be in the threes, which is rarified and risky territory, as the economy threatens to overheat.”

“The labor market continues to maintain a steady pace of strong job growth, with little sign of a slowdown,” Ahu Yildirmaz, and ADP vice president and co-head of the ADP Research Institute, said in a statement. “However, as the labor pool tightens, it will become increasingly difficult for employees to find skilled talent.”

“Job gains in the high-skilled professional and business services industry accounted for … (the most) jobs added this month,” Yildirmaz said. “The construction industry, which also relies on skilled labor, continued its six-month trend of steady job gains, as well.”

Only the information sector lost workers, down 2,000 positions for the month.

Business summit poll: Nearly 50% say they would not start a...