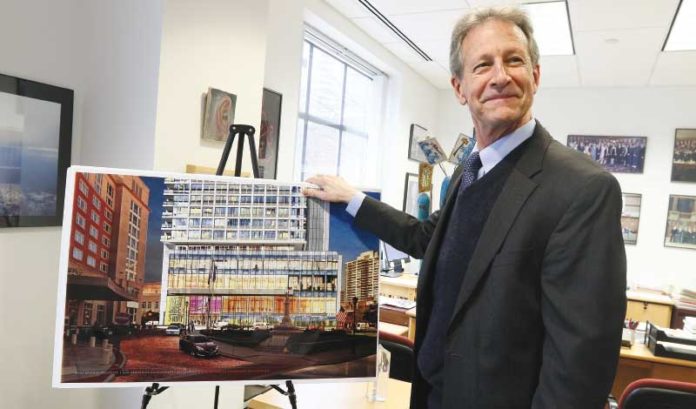 Dean George B. Stauffer said the Mason Gross School of the Arts at Rutgers University in New Brunswick is very excited about its latest — and potentially most lucrative — investment to date.

“We have invested in what I like to call an arts co-op,” Stauffer said.

The Mason Gross School of the Arts recently committed $12.4 million to become a 28 percent owner in the nearly $172 million New Brunswick Performing Arts Center, scheduled to open next summer.

The project also will encourage collaboration between students and professional companies while contributing to the growth and stabilization of arts in the city, he added.

“This is one of the largest arts projects in New Jersey since the creation of the New Jersey Performing Arts Center in Newark,” Stauffer said. “It’s quite an undertaking — one in which three regional companies and a university are sitting at the same table to encourage and allow students to mix with professional artists in a very cool environment.”

Stauffer said he could think of no one other than Rutgers University to fully engage in and shape what is one of the biggest and most unusual public-private partnership deals in state history.

The Mason Gross School of the Arts was founded in 1976 as the arts conservatory of Rutgers.

“It’s a relatively young school, as far as conservatories go, but it was set up in the right way to bring all of the arts under one tent,” Stauffer, who has served as dean since 2000, said.

The departments and programs of dance, music, theater and visual arts are currently housed in 23 buildings across campus, as well as the Mason Gross Extension Division, Rutgers Arts Online and the Rutgers Filmmaking Center.

“There is now this clear trend of the amalgamation of the arts, where students not only think in terms of just filmmaking or music or dance, they view the arts as one big canvas to combine all of the above,” Stauffer said. “The collaborations are therefore made easier than if film, for example, were to be housed in the communications department.”

Nearly 1,200 undergraduate and graduate students are currently pursuing degrees on campus, while 8,000 students are enrolled online and 2,300 children high-school age and younger are enrolled in Rutgers’ arts extension programs.

With a student-faculty ratio of 9 to 1, the students are able to present more than 550 performances and exhibitions annually, both on and off campus.

“We provide highly individualized instruction, which we feel and will continue to feel is exceedingly important for our students,” Stauffer said.

The New Brunswick Performing Arts Center, he added, will provide the students more opportunities to engage with the community.

Stauffer first learned of the performing arts center plan while representing the university on the New Brunswick Cultural Center board.

“The project that is now being unveiled was actually started nearly 10 years ago,” he said. “The idea was that the residential and commercial tenants in the building would help to fund productions and the collaboration between the arts in New Brunswick, the professional and regional companies and the Mason Gross school.”

When the project’s commercial tenant — Lehman Bros. — collapsed in the financial disaster, Stauffer said, the project was put on hold.

“Then, two years ago, Mayor James Cahill and Chris Paladino, president of the New Brunswick Development Corp., got it back on track,” he said.

The fact that the creation of two new theaters was to be included in the project was music to Stauffer’s ears, he said.

“I had just designed an opera house for the Douglass Campus that I was ready to begin fundraising for when it was announced that they would be building the performing arts center downtown,” he added. “I went to the developers and said, look, Rutgers and New Brunswick both need this opera house.”

While the State Theatre New Jersey is a fantastic production house, Stauffer said, it lacks the orchestra pit necessary to perform traditional operas.

“This therefore became a very exciting project for us,” he added.

To be built by DEVCO and supported by the state of New Jersey, Middlesex County, the city of New Brunswick and Rutgers, the New Brunswick Performing Arts Center also will be shared by three regional companies: George Street Playhouse, American Repertory Ballet and Crossroads Theatre Company.

But it was the Mason Gross School of the Arts that helped to design the main theater, according to Stauffer’s specifications, he said.

“The Lyric Theatre was redesigned to seat 462 — a compromise between my 600 seats and their proposed 300 seats — and everything that Rutgers would need to not only expand our opera, dance and dramatic theater programs, but also to create a new musical theater program,” Stauffer said.

The theater also will boast an 86-foot stage, a full orchestra pit for up to 70 instrumentalists, a 75-foot fly tower for suspended stage scenery, a green room and a trap system below the stage.

Constructed on the site of George Street Playhouse and Crossroads Theatre Company, across the street from the Heldrich Hotel, the 450,000-square-foot building also will house a 252-seat proscenium theatre with a 60-foot stage; three rehearsal studios; 30,000 square feet of office space; a 344-space parking garage; and an apartment tower with 207 residential units, an outdoor roof deck and a fitness center.

“We think access to such theaters will change the ballgame for Mason Gross in terms of the operas, musical theater and dance performances we can put on with live orchestral accompaniment,” Stauffer said.

Especially, he added, when the school’s location in New Brunswick provides Mason Gross with an incredible talent pool.

Being close to both New York and Philadelphia has provided several opportunities for professional artists to come work with students at the Mason Gross School of the Arts.

“We have access to so many actors, directors, producers and musicians who come to work for us or host master classes,” Stauffer said. “For example, our lighting designer is Donald Holder, who has won two Tony Awards for his work on ‘The Lion King’ and ‘South Pacific.’ And Alan Baer, principal tubist with the New York Philharmonic, heads our brass program.

“To have people of this stature and this degree of talent here at Mason Gross is a tremendous advantage.”

To further encourage professional studies in the arts, Stauffer said the Mason Gross School of the Arts also plans to expand its 3-year-old film program and develop more rehearsal space for dance and music ensembles, as well as a schoolwide production shop.

The New Brunswick Performing Arts Center is a good start, he added.

“When I arrived in 2000, I wondered why the arts buildings were in what was then a quite desolate downtown New Brunswick,” Stauffer said. “But the city has extraordinarily developed right around us — and us, along with it.”

There is a mandatory business course every student at the Mason Gross School of the Arts at Rutgers University must take, Dean George B. Stauffer said.

“‘Pain in the Assets? Finance and Entrepreneurship for the Arts’ will take our modern artists all the way through from balancing a checking account to setting up a 501(c)(3),” he said. “Our goal is to educate artists who are very skilled in their craft but also are very nimble.

“it’s not the old days, where you could get just one job playing in an orchestra or managing a show — now, the jobs available in the arts are changing before our very eyes.

“Often, you’ve got to go out and hustle up the work yourself.”

Dean George B. Stauffer said the Mason Gross School of the Arts at Rutgers University is currently speaking with businesses to join it in its investment in the New Brunswick Performing Arts Center.

“That may be in the form of naming opportunities,” he said.

To find out more about the project in development, contact Peter Hansen at: phansen@hansenphilanthropic.com or 973-757-0724.