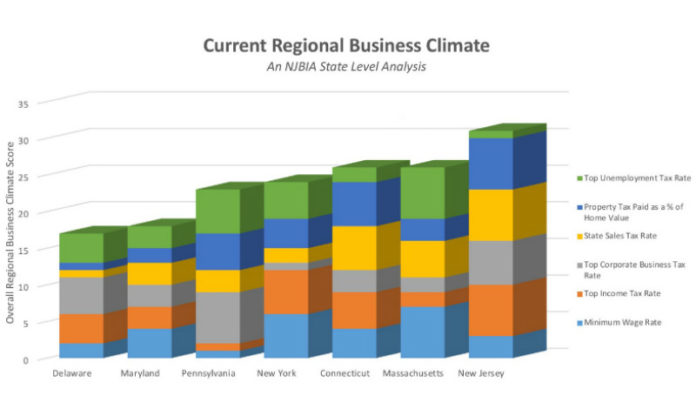 It’s no secret that the taxes and $15 minimum wage Gov. Phil Murphy is pursuing are worrying the business sector overall — especially since many of the taxes are being introduced at the same time, compounding their effect, or directly affect businesses’ bottom line.

The New Jersey Business & Industry Association released a report ranking New Jersey last among states in the region for its business climate — which will be further damaged by the proposed taxes and wage increase.

“This analysis should serve as an opportunity to reclaim our competitiveness and to improve the state’s economy through comprehensive planning, not excessive taxation,” said NJBIA CEO and President Michele Siekerka in a statement Thursday. “There is no better time than now to recognize the growing challenges of doing business in New Jersey and our competitive disadvantage with neighboring states.”

The report found the highest outmigration was from New Jersey, too.

And the only other category it beat other states on was unemployment tax rate: 5.8 percent.

“It’s important to recognize that New Jersey businesses are already paying their fair share when it comes to tax rates, and the additional cumulative costs that are being discussed and proposed could result in stagnation of our businesses, reduced staffing and hours, or automation, according to our members,” Siekerka said. “We need tax and regulatory reform to address structural deficits in our economy, such as public pension and health benefits costs, and school funding. We cannot tax our way out of these challenges.”