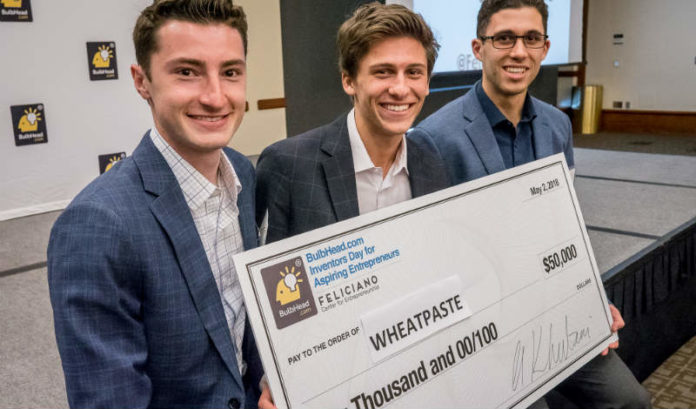 By far New Jersey’s largest-ever prize pool for a “Shark Tank”-style pitch contest was dished out by Montclair State University on Wednesday.

The university’s iteration of these increasingly popular campus competitions allowed student-entrepreneurs to capture a total of $80,000 in prize money, with one team claiming $50,000 in nothing-to-scoff-at winnings.

It may go without saying that Montclair wants to be known as the school that birthed the next great startup. And Dennis Bone, director of the Feliciano Center for Entrepreneurship located in the university’s Feliciano School of Business, views this new big prize as a way in.

“We look at it like this is investing in companies just as startup investors do,” he said. “The reason we raised the money to expand the prizes is that one of the biggest challenges for startups is still finding funding, especially for early stage startups that haven’t demonstrated they have a lot of traction, but they need money for their business model.”

For the four years the school has run this annual contest, the prize has been $10,000. It significantly increased for this year’s event — the BulbHead.com Inventors Day for Aspiring Entrepreneurs — based on funding provided by Montclair alumnus AJ Khubani, CEO of invention website BulbHead.com.

The first-place winner was the team behind an app called Wheatpaste. It’s described as a location-based mobile app that connects its users to local news and events as well as small businesses in the area.

George Garcia III, a co-founder of Wheatpaste, was ecstatic after winning the contest’s top prize.

“We’re thankful to have won this,” he said. “We’re able to do a lot more than teams in past years, which for us means a lot of development of this platform. We’ll be expanding our development team and adding a team referred to as community managers. We’re hoping to launch by mid-summer, with 100 advertisers ready to go.”

The idea for Wheatpaste emerged from a class project that had students designing mock startups. Garcia and his team refined a concept that initially started as an open news platform; it eventually took the shape of a specific platform meant for the public to post about local events.

Wheatpaste’s staff of community managers will post additional information about local happenings based on the participation of towns and cities. The platform is intended to be supported largely by having local businesses as advertisers.

“I think our presentation (resonated with judges) because we had a great underlying core values, such as strength in small business and in community,” Garcia said. “They’ve seen Wall Street taking over Main Street, and they don’t like that; the judges have also seen the impact of Amazon one-click buying on boutique stores, or the problem of public events that no one attends. We just conveyed it in a way that easily connected the dots.”

Garcia, who has a background in serving on local economic development commissions, is slated to be one of Montclair’s first graduates of its new entrepreneurship major. Joining him on the Wheatpaste team were students in psychology and exercise science programs, both of which have also taken classes in entrepreneurship.

Bone said that a hallmark of the university’s entrepreneurship program is that students from all educational backgrounds take entrepreneurship courses. And a wide range of disciplines participate in the competition, too.

Last year’s winning team featured a public and organization relationships graduate student and a marketing major. The startup was a custom bra-fitting business called Fit B.

The competition’s format starts with a dozen teams of Montclair students narrowed down through faculty-reviewed video applications. Judges, who are top entrepreneurs themselves, select six teams from that pool to be finalists for a final review with a different set of judges.

Aside from furnishing a potential Montclair-born successful startup with an early cash infusion, Bone said the experience is meant to help prepare students for the business world.

“We’ve worked on identifying skills, traits and the mindset most valued by businesses,” Bone said. “And in actively trying to understand skills most in demand, we’ve found that at the top of the list is problem solving. This competition really exposes students to the experience of looking for problems and coming up with ideas to solve them.”

Giving students the opportunity to make polished, persuasive presentations in front of an audience develops another always in-demand talent at companies, he added.

“So, even for entrepreneurs that didn’t win the prize money, there’s a lot they can take from this that can be applied to the business world,” Bone said.

Here’s a list of the top six contestants in the recent pitch contest. The stipulation for the prize winnings going to the Top 3 is that 20 percent of the award goes directly to the student team members while the remaining 80 percent must be invested in the startup venture under the coaching of the Feliciano Center for Entrepreneurship.