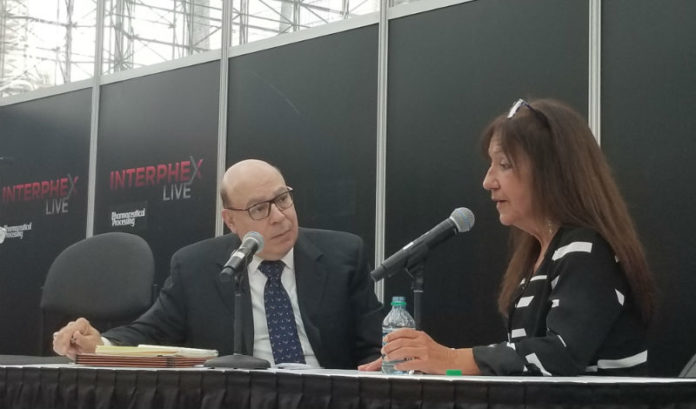 The pharmaceutical industry is always changing, and what is true or a trend now can reverse or transform in the near future.

One example of that was the influx of Indian pharmaceutical companies into the U.S., following a major crackdown by the Food & Drug Administration on plants on the subcontinent several years ago, according to Annette Kreuger, vice president of research, pharmaceutical-biotech industry, at Industrial Info Resources.

Kreuger spoke to a crowd of about 50 on April 17 at the annual industry vendor conference, Interphex, at the Jacob Javits Center in New York .

“They don’t want to lose their market share,” Kreuger said. “(The FDA) stopped production and said you can’t sell this, we’re not buying it. So, some of these companies have come over to the states, and they’ve bought these plants that were shut down by Big Pharma (as more outsourcing occurred) — New Jersey and New York got hit hard — since 2009 when they were having all this … there was a horrible title that popped up, it was called a rationalization director. It was their job to look at plants and say, ‘Do we want it? Or can we get away with just one?’ And plants started to shut down. Because there was overcapacity — there still is in some cases.”

That led to a comfortable supply of pharma-ready commercial spaces.

“So, what these companies have done, for pennies on the dollar, they will come over and buy a manufacturing plant that needs to be retrofitted and they can make their (active pharmaceutical ingredients). Most of what I’m seeing in the New York/New Jersey area are these older facilities, that were just shut down, are generics. Generic manufacturing for the domestic market. Because, as much clamoring as there is for the highly specialized cell-based biologics, those generics are needed, too. Especially with all the cost pressures coming,” Kreuger said.

“Not only are they buying all these plants, and spending $5 million to $10 million to retrofit them up to today’s standards, they are expanding,” Kreuger said. “They are building new, they are buying land. We didn’t see that coming, nobody really saw that coming.”

The benefit is amplified for local and state economies as well.

“It used to be that foreign-owned companies would use all their engineers back home, all their equipment would come from back home, so you’d say, ‘What good does that do to us?’,” Kreuger said. “Well, it’s like when you move into a new neighborhood. First, you stick with what you know, and then you start reaching out to the neighborhood. That’s a definite trend.”

And, since the focus of these companies is on generics, the future trend is in question as pricing pressure builds. Especially since Big Pharma’s pushback on pricing regulations center on the expensive drugs.

“The thought here is, we’ll give you (regulators) the generics and those coming off patent (or) we’ll make the generics. But just leave the expensive drugs alone. Those rare diseases, those ones that won’t, God willing, have 2 million patients to take it,” she said.

But, if the larger companies return to generic production, how this will affect the influx of foreign pharmaceuticals that have come in to do just that remains to be seen.