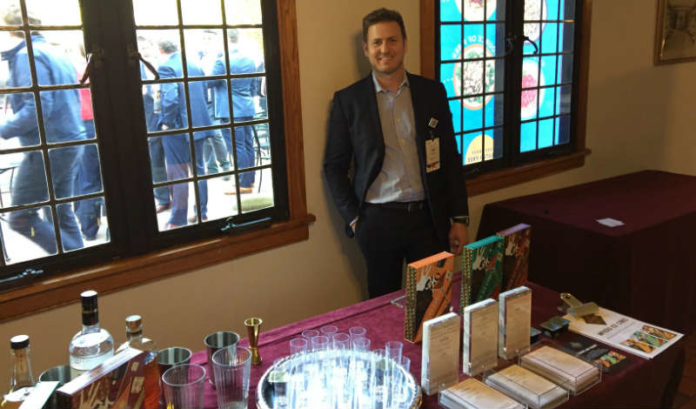 The pitch was easy: It’s like Keurig for cocktails.

So said Reid Rosenthal, co-founder of Herb & Lou’s Infused Cubes — one of the emerging companies that was on display at the Mazars Food & Beverage Forum last week at the Pleasantdale Chateau in West Orange.

“We have a special blend of seasonings that we infuse into ice cubs,” he told a small crowd gathering around his table, trying example of drinks created with tequila, vodka and rum. “You add a premium liquor and you have a premium drink.”

Rosenthal’s story was similar to the eight other companies on display.

Each has a creative idea for a food and beverage product, each is in a different stage of its growth — and each was looking to learn ways to improve from some of the industry’s sharpest minds, in attendance at the annual event.

Rosenthal said Herb and Lou’s, which sells at Home Goods and Tuesday Morning and some various liquor outlets across the state and into the Philadelphia market, is starting to gain some traction.

Now in his third year in business, Rosenthal said he expects to do a quarter of million dollars in revenue this year and double that in 2019.

“Our goal is to continue to gain distribution,” he said. “It’s a tough product, because you really need to teach people what it is.

“So, when we got into some big stores right off the bat, we didn’t have the national exposure yet, so they didn’t know how to sell the product. We got into Total Wines right away. Large order. They sold out, but it took them longer than it would like.

“Now, we’ve been in national magazine and won awards. We’re hoping that, over time, as people understand what it is, it will gain more traction.”

Exposure is what Chuck Walkley was trying to get for his months-old company, Kings & Queens, which sells flavored Antioxidant Adaptogen Teas infused with Chaga mushrooms he says are far more powerful than traditional antioxidants, such as pomegranates.

Walkely just launched Kings & Queens in Millstone, but, as a serial entrepreneur, he knows the deal: Distribution is key.

He’s currently in independent stores, but he’s confident distribution will grow as the word goes out.

For starters, he said, the tea tastes nothing like mushrooms — adding that he sells three flavors: lemon, peach and raspberry blackberry.

And he’s convinced his tea does something no other drink can do: “It’s a stress reliever,” he said.

His first goal, he said, is to convince people it’s not a pasta — even though that is how it usually is marketed.

“It’s a product based in potato, not wheat,” he explained. “We want to be the first brand focused solely on gnocchi.”

Nocca launched out of its Moonachie headquarters in November, and already has found a spot in Kings and in a national distribution network.

Not bad for a startup.

Some of the exhibitors were past the startup stage and were looking for increased exposure and assistance as they grow.

Sandeep Agarwal, who founded Pure Indian Foods with his wife, Nalini Agarwal, has found a market selling ghee, which Sandeep Agarwal describes simply as an organic substitute for butter that’s better tasting and better for you.

“The new philosophy is the more good fat you eat and the less carbs you eat, you lose weight,” he said.

“You can just use it as butter as an oil or as spread. So, you can cook with it, fry with it, sautee with it or put it on butter as a spread. If you try it, I guarantee you’ll never go back to anything else.”

The Princeton Junction-based company has found success, as it is in Whole Foods in the New Jersey-New York market and in more than 400 independent stores across the country, Agarwal said.

Ghee, he boasts, is made only from grass-fed cows and is free of GMO.

Virginia Cocktail Peanuts uses peanuts from Virginia, but the company is headquartered in Wall and the product is packaged in Red Bank.

“Our founder, Mary Vaden, is from Virginia,” Creative Director Lee Teevan said. “She raised her family in New Jersey and wants to stay in New Jersey, but she wants the world to know just how good Virginia peanuts are.”

Teevan says the company is 10 years old and does much of its business through e-commerce, hotels and corporate giving.

“We sell to gift stores, boutiques and hotels all over the country,” she said. “We just got into the Four Seasons in Washington, D.C. Our product is perfect for minibars.”

In the end, one company was judged the winner by all those in attendance.

This year, that award went to Kings & Queens.