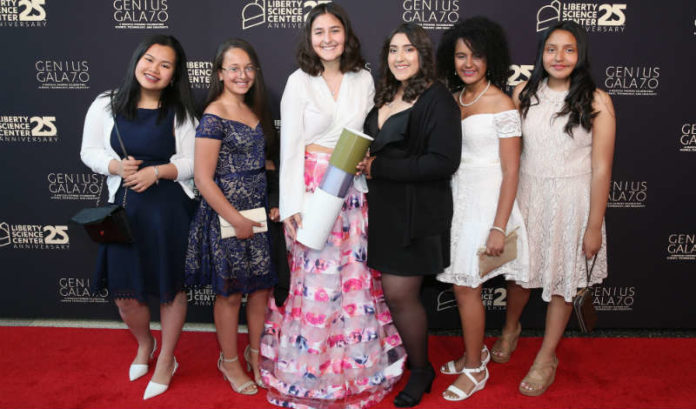 Vitalik Buterin is a 24-year-old whiz kid who doesn’t look much older than a teenager.

His age, in fact, was noted by Liberty Science Center head Paul Hoffman on Friday night when Buterin was announced as the youngest-ever recipient of an LSC Genius Award.

But here’s the funny thing about that moment.

Buterin may be the boy genius who created Ethereum, the second-most-valuable cryptocurrency network, and someone who already serves as a thought leader on all things blockchain, but he was a metaphorical old man compared with some of those saluted during LSC’s seventh annual Genius Gala.

The event, which has become the premier gala of the spring season, drew a record 738 attendees (including a who’s who of business leaders and politicos from around the state), raised a record $3.4 million for the facility and honored the lifetime achievements of some of the smartest minds in the world.

But it was the kids who stole the show.

Ralph Izzo, the head of Public Service Enterprise Group, talked about the LSC’s new SURE house, a project created, designed and built by college students from Stevens Institute of Technology. The house won the U.S. Department of Energy’s Solar Decathlon in 2015.

The contest called for teams to design an energy efficient mobile home. Stevens went one step further, making it resistant to storm surges, too (thus SUstainable + REsistent = SURE house).

Jersey City Mayor Steve Fulop brought up the members of Plastic Elastic, a team of eighth-graders from the city that won the Lexus Eco Challenge, a national STEM competition.

Milla wowed the crowd with her knowledge of scientists and science (she was on “Ellen” at age 3, reciting the periodic table).

Hoffman said the emphasis on the achievements of the youngest in society on a night to celebrate the life’s work of others was intentional.

He said it illustrates the power of the study of science in kids, which is the mission of Liberty Science Center.

“Kids can start inventing new things and making scientific discoveries at a pretty young age,” he told ROI-NJ. “That’s what we’re all about.

“It works. If you get kids doing science, as opposed to sitting in chairs while someone is lecturing you, amazing things happen.”

Hoffman said he is most proud of the fact that Liberty Science Center not only draws more than 250,000 students and has more than 2,000 teachers in professional development programs, but it also serves the underserved.

Hoffman said nearly 100,000 “at-risk” students from lower-income communities go through LSC every year. And LSC puts special emphasis on trying to develop interest in science in communities that are underserved in the sector, including girls and minorities.

“Our special mission is to serve the underserved — people who are underrepresented in the sciences,” Hoffman said.

The emphasis on youth was felt throughout the night.

The message was not lost on an audience of supporters.

“This place just brings it to life for kids,” Izzo said. “I’m here with my daughter and her friend who can tell you stories about their third-grade experience here. And I normally don’t take them to corporate events, but they were happy to come to this because of what it meant to them.

“We need educated people in STEM for the future. And if we can’t get them excited about it in the early stages of their academic careers, how will we capture them later on? We’ve been a longtime early partner of Liberty Science Center, and we’re just happy to be able to support it.”

“If you think about New Jersey, you think about all of the industry related to STEM, all of the health care, all of the pharma, all of the device makers — it’s all rooted in science,” he said. “We’ve got to make sure that we’ve got a mechanism and platform in place to create the next generation of people to push that forward.”

(READ MORE from ROI-NJ from the Genius Gala on the Genius Award winners and LSC’s SciTech Scity.)

Bob Doherty, state president of Bank of America in New Jersey and the chairman of the New Jersey State Chamber of Commerce, said it is imperative for businesses in the state to give back to organizations such as LSC.

“I don’t think places like this can survive without the corporate support,” he said. “I’m lucky, I work for a place that believes in being a good corporate citizen and giving back a lot to the communities in which we do business.

“Because we believe strong places like this are good for business. There’s a connection.”

Josh Weston, the retired former head of ADP, said more than just businesses need to get behind LSC.

Weston and his wife, Judy Weston, made the donation to help open the Weston Family Lab for Earth and Space Exploration earlier this spring, saying private citizens need to do their part, too.

“It’s important for more than just the business community,” he said. “There are people who are lucky enough to have a lot of money and, if they are concerned about the welfare of their country, they should think about contributing to STEM education.

“Our country’s future is dependent on a STEM-centric workforce. You have to turn kids on to science at an early stage. Our family mission is turning students on about STEM.”