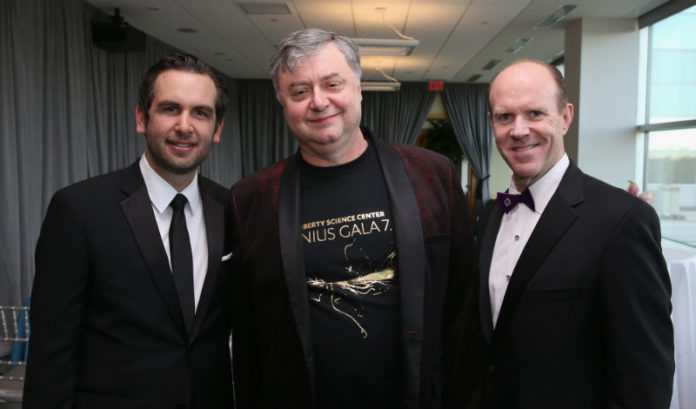 Jersey City Mayor Steve Fulop goes out of his way to give credit where credit is due when talking about the impact of Liberty Science Center.

“It’s all Paul Hoffman,” he said of the LSC’s CEO and president during the Genius Gala that marked the museum’s 25th anniversary.

And Fulop knows just how important the center is to Jersey City.

“We don’t have professional sports teams, we don’t have (the New Jersey Performing Arts Center), we have Liberty Science Center and we think, pound for pound, this is as good as anything, because it is inspiring the next generation of young people to be innovators and scientists and leaders,” he said.

Its impact should only grow.

“SciTech Scity is a heavy lift, and we’ve gotten off to an incredible start with EY and Verizon as our partners,” Hoffman said. “It’s going to change the face of New Jersey.”

The project, which organizers hope to open in 2021, will be built on 14 acres of property adjacent to Liberty Science Center in an agreement that was recently approved by the Jersey City council with the backing of Fulop.

“SciTech City will be a mini-city of innovators and companies who believe in the power of science to create a better future for all of us,” Hoffman said. “More than 100 science and technology startups will be based at SciTech Scity at any one time, as well as a science-focused K-12 school.”

The goal, he said, is for leading scientific innovators to come together in a shared space.

“We’ll build SciTech Scity and change the world,” he told the audience.

Hoffman feels its location will help New Jersey become the equal of New York City in the tech and science startup space.

“We need this type of ecosystem almost right in the shadow of Wall Street on this side of the river,” he said. “There’s no reason the hottest startup companies should be based in New York City. They can come here.”

(READ MORE from ROI-NJ from the Genius Gala on the Genius Award winners and the youth honored at the event.)

Steve Howe, U.S. chairman and Americas managing partner of EY, said his firm is thrilled to be a heavy supporter of both Liberty Science Center and SciTech Scity.

“What’s evolving here is really exciting,” he said. “You can just feel the enthusiasm building.”

It was a no-brainer, he said, for EY to become a founding sponsor of SciTech Scity.

“We’re going to have educators, entrepreneurs and companies working together,” he said. “Connecting all of these people will only bring better ideas. It’s brilliant.

The growth of Liberty Science Center cannot be overstated.

The Jennifer Chalsty Planetarium (the largest in the Western Hemisphere) opened in December and the Weston Family Lab for Earth and Space Exploration opened this month.

Attendance has increased by more than 65 percent in the past five years, making it the fastest-growing museum (not just science center) in the country, LSC officials said.

LSC drew more than 700,000 visitors last year, including more than 250,000 students — many of whom are from communities that are underserved in the scientific world.

“Our special mission is to serve the underserved — people who are underrepresented in the sciences,” Hoffman said.

Friday night’s gala drew a record 738 attendees and raised a record $3.4 million for the facility.

Hoffman said the funds raised will go to the facility’s mission of educating the next generation of scientists.