Home Tech Take it from a genius: We could find life on another planet...
Facebook
Twitter
Linkedin 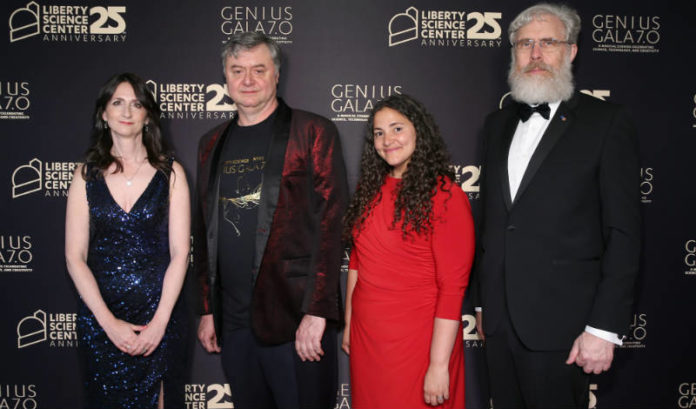 Here’s a question that perhaps only a genius can answer.

What is more likely: Finding life on a planet like Earth — or finding something from a past life on Earth?

Lucky for those in attendance at the Liberty Science Center’s seventh annual Genius Gala on Friday night in Jersey City, there were two geniuses on hand to answer.

Sara Seager, an astrophysicist from Massachusetts Institute of Technology, handled the first part.

Seager was one of four honorees given a Genius Award by LSC head Paul Hoffman, for her work pioneering the field of exoplanteology, or the ability to detect planets surrounding other stars outside of our solar system.

So far, she has detected more than 3,700. And, once they are detected, she said, the study of the gases in their atmosphere can help determine if there is life on these planets.

Seager, a Canadian, has been called the “Indiana Jones of Astronomy” for her quest to find the Holy Grail of planetary science, a second Earth. She said the ability to find more planets — and observe their atmospheres — is closer than many realize.

Earlier this year, MIT and NASA launched TESS, or Transiting Exoplanet Survey Satellite, which is designed to detect even more planets (some astronomers predict there could be as many as 100 billion in the Milky Way). More so, TESS will be able to determine which planets are more likely to have life and thus deserve closer study.

When asked by Hoffman how long it might take to find life, Seager hedged — but only a little.

“Scientists never want to speculate,” she told a crowd of more than 700.

“Very soon we’ll have the capability to find another Earth,” she said. “And whether we find it or not is just up to nature — whether or not those planets actually are out there and common, which we think they are.

By then, woolly mammoths may again be roaming this Earth.

Church has been a leader in genomics research for decades. He invented genome sequencing in 1984. Church said the study of genomics ultimately adds our ability to fight disease through gene-editing technology.

And, earlier this year, he launched his latest startup, Nebula Genomics, which aims to reduce the genome cost to the patient to $0 while allowing the person to own his or her own DNA data.

But his biggest passion is recreating DNA. His dream of woolly mammoths returning to roam the Earth is the subject of a de-extinction effort at Harvard University involving the insertion of DNA preserved from the Pleistocene era into elephants. Church would not put a timetable on the milestone, but he said work on the project continues.

Two other honorees received Genius Awards from LSC on Friday.

Buterin, 24, was an early scholar of Bitcoin, but is credited with seeing how the decentralizing potential of the technology could apply to more than banking.

Santos cross-studies the cognitive abilities of humans, monkeys and dogs as the director of Yale University’s Comparative Cognition Laboratory and Canine Cognition Center.

Examining how other species think — and, in some ways, how they can be more advanced than humans, she said — is a young field that will only grow as more species are examined.

The gala drew a record 738 attendees (including a who’s who of business leaders and politicos from around the state) and raised a record $3.4 million for the facility.

Hoffman said the funds raised will go to the facility’s mission of educating the next generation of scientists.

(READ MORE from ROI-NJ from the Genius Gala on the youth honored at the event and LSC’s SciTech Scity.)

It got 26 instead. A look at the chairs and co-chairs: