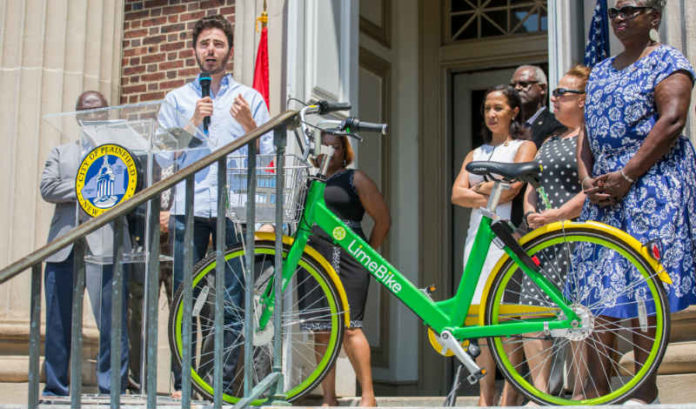 Bike-sharing has been a growing concept in urban areas as more eco-conscious residents seek walkable communities.

The trend has thus far hit the “gold coasts” of New Jersey — Hudson and Camden counties — but for the first time is now in Plainfield.

On Tuesday, Plainfield’s city council and board of education, along with LimeBike and EZ Ride, announced a new dockless bike program for the city.

This is the second dockless program in the state, after Camden announced its $1 per hour program with Beijing-based ofo last month.

“We’re so glad to be working with the Voorhees Transportation Center at Rutgers and ofo to help us showcase Camden as a strong candidate for a bike share as a potential future investment,” said Kris Kolluri, CEO and president of the Cooper’s Ferry Partnership. “In addition to creating jobs and boosting the local economy, the Camden Bike Share could ultimately contribute to easing traffic congestion, reducing carbon emissions, and saving energy.”

Similarly, LimeBike aims to become a transportation option for Plainfield. Bike-sharing programs have reduced the need for short-distance car trips.

“LimeBike is a smart mobility biking system, which means we can make sure that our bikes are there when people need them. Not only is this a healthy recreational activity that will allow residents to take ownership of the Plainfield community, but it’s also means for commuters to reach the train station, and for students to get to and from school. We are really excited to partner with the city of Plainfield and provide healthy sustainable ways for residents to explore their city,” said Gil Kazimirov, general manager of LimeBike.

LimeBike’s program operates at no cost to the city and its taxpayers, and is the first program in the state for the California-based company, according to a statement Tuesday.

“As a part of our Healthy Plainfield Initiative, we are the pioneering city in the state of New Jersey to partner with LimeBike, and this represents our ongoing commitment to providing the residents and especially the youth of Plainfield with healthy and active ways to engage in all of the wonderful things Plainfield has to offer,” said Mayor Adrian Mapp.