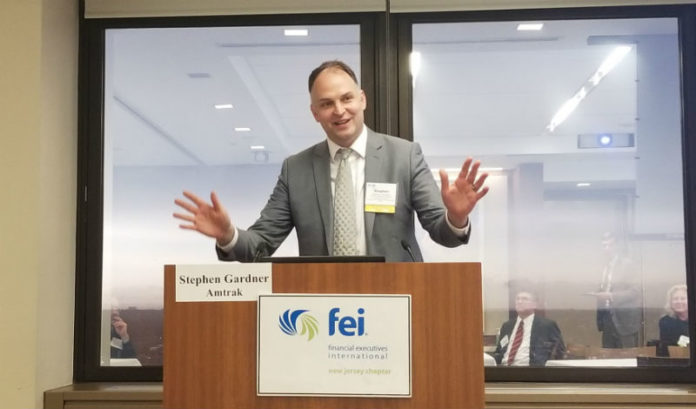 There is no Plan B.

If the tunnels under the Hudson River failed tomorrow, the nation’s busiest region for rail transportation would come to a standstill.

Of the 31 million annual riders on Amtrak trains, just under half — 13 million — are on the Northeast Corridor, which runs from Washington, D.C., to Boston.

Gardner spoke to a crowd of about 30 at the Financial Executives International New Jersey chapter meeting Tuesday in Newark.

Not surprisingly, the Gateway Tunnel Project was a big talking point.

With millennials increasing the demand on rail lines, the Gateway Tunnel Project has become more important than ever, Gardner said.

If the region were to lose one tunnel of the existing two, there would be a reduction from 22 trains per hour, or about 450 trains per day, to only six per hour.

Compounding the problem is the fact that the lines along the Northeast Corridor are mixed ownership and mixed use.

Of the 2,200 trains traveling the region, there is a combination of eight different types of commuter railroads, freight lines and Amtrak.

“Nowhere in the world does that,” he said. “It’s kind of like a Ferrari and a school bus sharing a two-lane road. It’s not the most efficient way to operate a system.

The mix maximizes the use of tracks, but it also maximizing potential disruption.

“There are few places you can find a single opportunity of failure for an entire region of a transport system (other than the tunnels),” Gardner said.

So, why the delay to build the new tunnels needed to ensure uninterrupted service?

It’s a difference of philosophies that is taking place at the federal level and is yet to be resolved, Gardner said.

There are two pieces to the puzzle, he said. One side believes it should be the responsibility of the two states that the tunnels connect, while others believe the federal government should provide funding, since the corridor is located in a region that holds 10 percent of the entire country’s gross domestic product.

It’s all part of a bigger infrastructure picture, Gardner said.

“We haven’t solved the infrastructure problem for the nation,” he said.

“This is just one piece. So, there is this bigger question at the federal level of, ‘This is a lot of money to be spending on one project in one region.’

“What is the role of the federal government in big projects like this? I think this administration has an idea of how they would like to see federal transportation programs work, relative to infrastructure and transportation.”

Especially for a project this size.

“It sets the stage for a whole new era of infrastructure in the United States,” Gardner said. “This is the first of many. We are in the business of recapitalizing the assets that our grandparents and great-grandparents built.

The ARC project, killed by Gov. Chris Christie, was a project that would have led to more building.

But, Gardner said, Christie was right to do so.

“If you had had ARC constructed, and we had the same problem with the tunnels we have, we’d still have to build new tunnels,” he said. “ARC would have never created the capacity necessary to replicate the New Jersey Transit capacity in the Northeast Corridor.”

ARC included plans to add tracks that ended in the basement of Macy’s.

“ARC was perceived as a capacity improvement, that New Jersey Transit needed to grow,” Gardner said. “Gateway is a preservation project to keep the capacity we have.”

That being said, some of the studies and planning that NJ Transit did for the ARC project are being used in the Gateway project, Gardner said.

And, while Amtrak and its partners in the Gateway Development Corp. continue to search for more funding, the clock continues to tick on the 107-year-old tunnels.

Gardner said everyone needs to change their mindset.

“We do not have the mindset of being builders, we’ve primarily been maintainers and users,” he said.