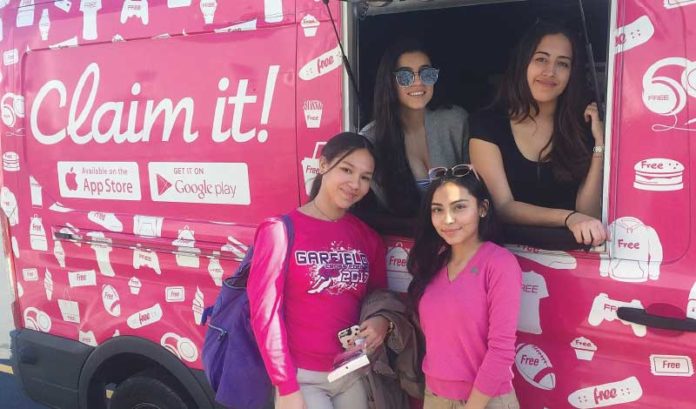 The Claim it! truck, Ali Gates said, is like having billboards all over the place for his app that connects businesses to local spenders by giving away free prizes.

“People locate the truck in the app, they snap selfies at the truck, and they get free stuff,” Gates, co-founder and CEO of Claim it!, said. “What’s not to love?”

Gates said the truck has been more than effective advertising for the pre-revenue startup.

“It got us a lot of buzz early on and allowed us to engage with people, too,” Gates said. “We even think adding one more truck into the mix would totally work.”

According to Ali Gates, co-founder and CEO of Claim it!, more than two-thirds of the app’s daily active users are female.

“Most people say that has to do with the branding, but I truly think it is simply because we are a consumer-driven app,” Gates said. “Women, especially those with dynamic purchasing power, are typically really engaged with marketplace apps that provide ways to interact and meet with people.

“I also think that women are more interested and curious in learning more about selling items to make money.”

Ali Gates, co-founder and CEO of Claim it!, said that every time he traveled from Manhattan to Newark to work with the business accelerator at Newark Venture Partners, he fell a little bit more in love with the city.

“I started spending a lot of my time here because it was pretty exciting,” he said.

When he mentioned this to his investors at Newark Venture Partners, he said the team recommended he move here entirely.

(READ MORE from ROI-NJ on Claim it! and Ali Gates.)

“It seemed like a natural fit, so, we did,” Gates said. “We moved our entire crew — myself, my lady and my 8-year-old daughter, Amirah — to Newark last year, and it’s been great.”

Gates said he also has no plans to leave as he continues to grow the company.

“Perhaps we’ll open offices elsewhere, maybe in San Francisco, but I don’t ever see myself moving back to New York,” he said.

Download Claim it! for free at the Apple App Store.