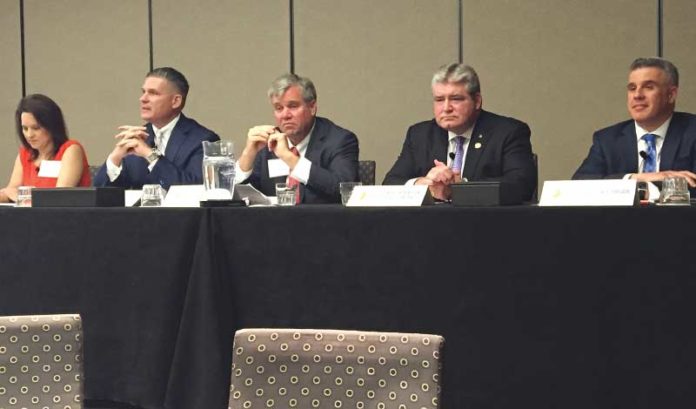 Tom Byrne no longer is the head of the state’s investment council.

But he still has a few things to say about the state’s finances — and what truly adds up.

The loss of money from outmigration, he said, is far greater than potential revenue from a millionaires’ tax.

“You’re talking about a billion dollars, annually, of tax money that’s out of here,” he said. “And that number has been increasing dramatically, to the point that it was $3.4 billion in the most recent year.

“A millionaires’ tax may prevent a fiscal heart attack, but it may also cause long-term economic cancer.”

Plenty of solutions for New Jersey’s financial issues were offered.

He told the audience of his recent trip to Florida to watch his teenage son play baseball.

He said he met two former New Jersey residents in Florida, both of whom were supplementing their income driving a cab or Uber while attempting to start their own small businesses.

Both, Greenwald said, had the same story: They left because they couldn’t afford their property taxes, he said.

Greenwald said he and Oroho (among others) have been working in a bipartisan fashion to create real property tax reform. Everyone agreed that the problem cannot be pushed off any longer.

And tax remedies, Greenwald said, have not helped them.

“I will tell you that every business tax that we have implemented, every public policy decision — whether they are rebates or arbitration reform or 2 percent property tax caps, whether it was pension reform — each and every decision is one short step away from, ‘How do we confront the property tax crisis in this state?’ ” he said.

“If we’re going to be honest with ourselves, none of those public policy initiatives lowered our property taxes, but if we do have the guts to upset the apple cart and transform a tax system that is broken and relies solely on property taxes to fund local government — and we are the only state which does that — if you are willing to upset that apple cart, all the other difficult public policy decisions that we have made, will make new Jersey stronger, more stable and allow us to have sustainability going forward.”

Oroho said the state has a revenue problem.

“When you take a look at New Jersey and the aspect of competitiveness, what we’re really talking about is being competitive for capital,” he said. “That’s what it’s all about.”

Oroho, a Republican, said he’s been happy to work with state Sen. President Steve Sweeney (D-West Deptford), a Democrat, on the issue.

“Sen. Sweeney and I have been talking about the total cost of government for a long time,” he said “That’s just the start of it. The issue becomes, how do we restructure our taxes, so we can actually have real property tax relief? And that’s one of the things that we’re looking at.

(READ MORE from ROI-NJ on the GSI Economic Forum and Daniel Geltrude’s thoughts.)

“Other states are successful (often) by passing off some of the tax burden to people outside of the state, as we did with the (Transportation Trust Fund). Then, we have to deal with the health benefit cost and the benefit cost.

“It takes time and discipline. We didn’t get here overnight, and we’re not going to get out of this overnight. If we don’t deal with that total cost of government, then we’re never going to get there.”

Greenwald agreed, saying New Jersey needs to face the fact that the top places residents are going may surprise some people.

“We see a shrinking middle class,” he said. “We are the state with the largest outmigration in the country and we know that the No. 1 state they go to is not Florida, it’s Pennsylvania first. And they go to New York second.

“They have different tax policies than we do. New York has a higher income tax than we do. Yet, people choose to go there. I will tell you the reason they choose to go there is, if you are outside the city and you go to anywhere in New York or any county in Pennsylvania, you lower your property taxes dramatically. And you have very much the same quality of life.”

Greenwald said the trend will only continue until New Jersey gets serious about property tax reform.

“People will continue to move and relocate in order to find a place that is more affordable for them and more sustainable for them and their families,” he said. “I don’t care if you are rich or middle class or poor you are trying to find the best quality of life.”

Planned Cos. issues 1,300 grants to help workers during COVID