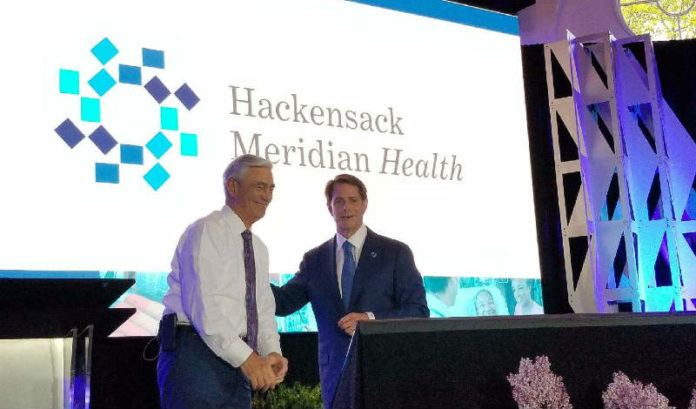 Legacy Hackensack and legacy Meridian are in the past.

Which is why the successful co-CEO team of John Lloyd and Robert Garrett is on its way to the finish line.

It’s something Lloyd, who will retire at the end of this year, isn’t ready to face just yet.

“I think health care is going to change rapidly over the next five (to) seven years,” he said Wednesday night at HMH’s annual meeting in East Brunswick. “I’ve always prided myself in anticipating what it’s going to look like. And, now, I’m not going to be around for that.”

After the two health systems’ merger, Lloyd agreed to share the CEO seat with Garrett for two years, before retiring.

When asked if he would try to renegotiate the contract to stay on a few more years, Lloyd said no.

“I’m leaning towards retirement. I’ve been doing this for 42 years,” he said.

It’s why Garrett presented him with the company’s first-ever lifetime achievement award at the event.

“I think we can all agree that John’s commitment and leadership has changed the New Jersey health care landscape,” Garrett told the crowd of at least 800.

Lloyd is credited with being the first to create a semblance of population health management, with home care outside the hospital walls — which was done in partnership with the health system’s newest acquisition, legacy JFK Health.

“John’s got a great history of creating new organizations, and a great track record,” Garrett said. “When I look back on John’s career, I look back at the creation of Meridian. Today, we take health systems for granted, but, back then, it was a novel idea. He didn’t believe that, to have a health system, you just had to have a confederation of hospitals, he believed that you had to be fully integrated.”

Looking back, Lloyd said that, although the relationship went well, there were a few points of tension.

(READ MORE from ROI-NJ on the news from the annual meeting.)

“I think we probably tried to do too much, too soon,” he said. “An example is that we’ve sort of reset and started a new (systemwide) culture. We spent some time on that early on, but it didn’t get traction, because I think people were still trying to feel out, ‘What does it mean now that I’m part of another system?'”

It was a source of anxiety for the CEO team.

“I don’t want to say it was a mistake, but we were anxious and we wanted to get things moving.”

And Lloyd made clear he still has a long list of items to tend to before the year is up.

First on the list is the Carrier Clinic merger, as well as the opening of the new medical school in Nutley and Clifton with Seton Hall University.

There are other things , too, that are not yet ready to be made public, he said.

“I’m going to work right until the end of the year,” Lloyd said.