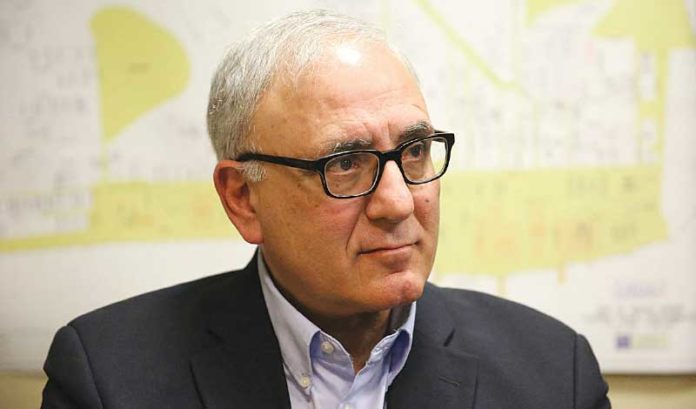 John Palmieri was named Newark’s deputy mayor for economic growth, transportation and infrastructure at the start of the year.

Palmieri has been tasked by Mayor Ras Baraka to focus on those targeted areas of economic growth, especially transit and infrastructure, as well as help with the city’s broader growth vision.

It’s a familiar role for Palmieri, who has taken on economic growth initiatives along the East Coast in urban areas such as Charlotte, Boston and Providence. He also has experience in the state through his stint as executive director of the Casino Reinvestment Development Authority.

“I have significant experience in identifying appropriate economic development goals, depending on the job, obviously, and executing and working with the Legislature and developing strategies. I come with that to this job,” he told ROI-NJ in a recent interview.

Baraka hired Palmieri to focus on inclusive efforts and ensuring that the city pays attention to its residents as it goes through its growth spurt.

Palmieri spoke with ROI-NJ about his new position and how his past roles can help ensure the best outcome for Newark.

ROI-NJ: How is this role different than your past roles?

John Palmieri: This is a little bit different, because the mayor created a broader scope for this position, broader than being in charge of economic development. My role principally here is to take a broader look at the kinds of things that can make a difference. Strategies for market opportunities. Taking a look at how we can align the strategies that key players prepare for the mayor. I’m providing counsel to the mayor and identifying things we ought to do to coordinate more clearly.

ROI: What is Newark’s biggest challenge to economic growth?

JP: I think clearly the city’s role in making sure its citizens participate in the success of a growing economy. The economy is going to grow, I can’t believe any independent economist isn’t going to come to that conclusion, and others have said it should have happened before, but it’s at a tipping point. So, how do the residents participate fully? With both housing and employment. Because you can have a prosperous region, but then the city doesn’t get to enjoy the benefits of that success. It’s a fairness issue. I think we have to impress that upon the corporations and institutions.

ROI: The mayor has been vocal about that, both with the Newark 2020 strategy and insisting on affordable housing. What are your thoughts on that?

JP: I think the mayor’s leadership has been instrumental in making clear that the residents are part of this renaissance. First of all, it starts with leadership and a champion, and I think we can all agree Mayor Baraka is a forceful and committed mayor. These corporate entities supply a base for tax collection. So, it’s important, as the downtown grows, it does so with an (eye toward) people who have been left out. That will play out over the next few years. This is a new episode for the city, becoming a more important player for corporate locations, with all the transit advantages and airport location. The mayor is going to make sure that citizens of city get to take advantage of that.

ROI: Where are you focusing your efforts the most? Where does Newark have some of the greatest untapped potential?

JP: My title is broad. I’m deputy mayor for economic growth, infrastructure and transportation. Working with the Port Authority and port area to identify underutilized and second tier warehousing in the port district. They would agree we need to put together a better plan for investing in Port Newark. I’ve had several meetings with staff here who are focused on it. Looking at the ways and means to create more activity that creates jobs and takes advantage of technologies in coordination with the needs of the port and airport. That is something that makes a lot of sense and is a focus area for me. Transit is part and parcel there.

I’ve had a couple discussions with NJTPA to make sure Penn Station is improved — since that’s the entry point for tens of thousands of residents and workers. NJ Transit is the owner, but Port Authority has a vested interest. We are working with key groups to make sure to identify funding to do improvements here. There is also the PATH extension, currently being finalized through environmental studies, to extend to the airport. But my principal role is to make sure we are not doing these one-off projects and failing to identify the greater impacts if we coordinate the mission for the city.

ROI: NJ Transit and PANYNJ have been embroiled in their own fights for funding for other projects at the state and federal level, and NJ Transit just got a boost in funding from Gov. Phil Murphy. Does any of that come to Newark? And how are all the other transportation projects going to be funded?

JP: I’d like to think Newark will qualify as a recipient of important transit funding. Obviously, I’m here to make the case for Newark, but any impartial and honest observer will say Newark is a commercial center and transit center for the state. If we are going to grow the economy for the state, we have to look at Newark.

Incentives will remain a part of the development program of the city for the foreseeable future. There is also a question about how the state reassembles incentives, but the city also does its own incentives. Depending on what the governor does and what the EDA audit does, it will be important and play out in the next several months. We need to provide incentives and state and federal financing for transit and park improvements. County Executive Joe DiVincenzo is (helping grow) the park system, which creates more momentum for growth.

ROI: What’s the most immediate need for the city?

JP: I have a pretty good feeling about the united front regarding role that Newark needs to play. The big corporate guys understand how important it is for us to improve transportation, not just transit. Roadway systems, as many as there are in the city, the offramps and connectivity to the city is a problem, especially as the city grows. There’s not a whole lot we can do in a city where roadways are built with very little room for doing more acquisitions — that can be complicated and expensive. McCarter needs widening, but it’s expensive and needs a lot of planning, it will not happen in the short term.

So, what can we do to improve the roadway systems that exist. Obviously, they are not owned by the city, they are state and county roads, but they are critical to the success of the city. We are looking at what can we do for smarter signalization along McCarter Highway. And by the way, the NJTPA has already assembled financing — we will begin working on the signalization upgrade program for McCarter this summer. That, to me, is at a minimum, the kind of thing we need to do, as it connects Newark to other parts of the state and country. Planning and NJDOT understand that and I like to think they will work with us to help us do a better job of getting people in and out of the city.

ROI: The millennial factor continues to play a huge role in how cities and towns develop. What are your thoughts on that? Is Newark going to be able to capture a younger population, as well as the overflow from New York City that is boosting Hudson County right now?

JP: The waterfront has become too expensive, so Newark becomes a more robust employment center as a result. Never mind the Amazon proposition, if that happened we’d be on steroids. But we have a lot to offer and a lot of space. Some cities are built-out and bound up in buildings that don’t permit for development. We have a lot of space in downtown, and in the wards, and that will take off because of the cost of living in places like Jersey City and Hoboken now.

The role for us will be to make sure to build in affordability. Mayor Baraka took a bold step demanding affordable housing in new residential buildings. How we create a multiplier effect is the challenge. The push to the west from Hudson communities will create opportunities for millennials to live and work here. I’m not sure enough of them realize that yet in terms of branding and marketing, that will take time, it’s somewhat a chicken and egg situation. For us, the challenge is integrating millennials in a way that doesn’t disrupt the environment for older residents and providing affordable housing for residents who have grown up in Newark. How to assimilate the demands of young professionals into a newer Newark.