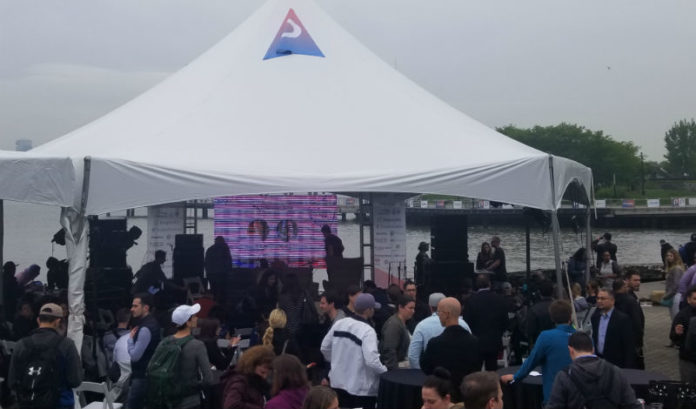 Aaron Price is humbled by the comparison to SXSW, the most famous tech-centric festival in the U.S.

Or even New York Tech Day, an event earlier this month that bills itself as the largest tech event in the country.

As the creator of Propelify, Price knows the event — only in its third year — is not at those levels.

But after seeing thousands of entrepreneurs, big business officials, venture capitalists and New Jersey officials flock to the Hoboken Waterfront on Thursday — despite the overcast, wet weather — Price feels Propelify has a unique place in the tech ecosystem.

“South By has been around for 30-plus years and is a great brand,” he said. “I think what we do is complimentary and very different. If people compare us to South By, it’s humbling.

“At the same time, we want to build our own thing.”

With a focus on the New York-New Jersey area.

“The goal is to be defined as what we are here and how we can represent the region,” he said.

That’s what attracted more than 300 companies and 10,000 registered attendees to the event facing Midtown Manhattan.

Price, in fact, said the turnout fit the theme of the year: Finding a way through when there isn’t.

The crowd included individuals from across the Northeast, the U.S., as well other countries — people such as Venture Out NY Program Director Philip Delvecchio.

Delvecchio said Propelify appeared to have more earlier stage startups, rather than post-seed, which is what his company seeks. Despite that, he still found the trip worthwhile.

“The fact that it is in Jersey is a good thing for New Yorkers, because it does bring New Yorkers over here, and allows them to interact,” he said. “I’ve met so many people from Jersey, and that’s something, if you do it over there (New York) is not as easy to do.”

Those are the type of thoughts Price wants to hear.

“(We’re) trying to make it a place where business can happen,” he said.

Price isn’t the only one with that goal.

The New Jersey Economic Development Authority is trying to boost the tech industry in the state by helping firms such as Edison Partners and Newark Venture Partners.

Kathleen Coviello, vice president of technology and life science investments at the EDA, said the EDA has invested in their funds or provided loans to some of their startups.

It’s something she hopes will continue to grow — especially with a new governor touting the industry as the most important for the state.

(READ MORE from ROI-NJ on the Propelify event.)

Despite multiple events per year to help startups and investors interact, there is still a lack of awareness of the resources available through the state, Coviello said.

“So, it’s really important to have events like Founders and Funders and Propelify to pull the community together and connect the web,” she said.

Coviello said there are a lot of untapped resources within the state’s universities that could help startup communities.

“We are seeing commercial entities reaching into the universities — that happens all the time at MIT and Harvard and Stanford,” she said.

Some in the industry say New Jersey lacks a central hub, the way many think of Boston and MIT, to make this happen more often.

Others believe that different sectors can lay claim to different cities in the state.

Coviello said she sees progress, noting some of things going on at nearby Stevens Institute of Technology.

“The research and tech transfer offices now have meetings on a regular basis, that never happened before,” she said. “You had these kind of silos, so that’s a tip that’s just starting that is moving in the right direction.”

Trust no one: Cyberattacks are growing more advanced, experts say —...