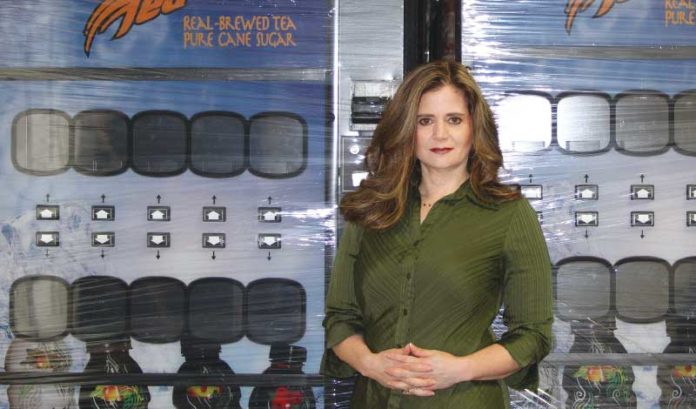 It was a phone call Laurel Whitney said she never could have expected.

“The guy said, ‘I don’t want to scare you, but I just got out of prison three weeks ago — and there is nothing I miss about that dang place except for my PUSH Pineapple soda.

“‘It was the one thing I looked forward to every afternoon, and, now, I’m off it cold turkey. I can’t find it in the store by me and I certainly don’t want to go back to prison to get some!’ ”

Whitney, the co-founder, co-owner and chief financial officer of PUSH Beverages, said she sent the caller a box of PUSH Pineapple soda each month until, one day, the box was returned undeliverable.

“I hope it was because he moved and forgot to tell me, and not because he ended up back in the slammer,” she said.

This is just a taste of what it has been like to work at PUSH Beverages, a multimillion-dollar Roxbury-based beverage company whose products now have a “cult following,” Whitney said.

“We are now in serious growth mode,” Whitney said. “But we never intended on becoming a beverage company — this just sort of manifested itself out of necessity.”

Whitney had been working for more than a decade as general manager for Full Service Vending when the recession of 2008 hit.

“We had a lot of institutional contracts, five-year contracts and so forth, that locked us into pricing,” she said. “So, while Coke and Pepsi were increasing their prices like crazy, our costs were going up, our prices could not and we began to lose profits.”

To keep the business afloat, she and her now-business partner, Moti Almakias, began looking for ways to offset costs.

“At the time, I had been reading all these articles about the lack of brand loyalty, and how people just wanted to get good products at a good price,” Whitney said. “When I read that Kirkland Signature toilet paper was ranked No. 1 over Charmin, it made me want to come out with something so good that the name didn’t even matter.”

Full Service Vending launched PUSH Beverages in 2009 with four flavors — orange, pineapple, ginger ale and grape — and sold them exclusively in the company’s own vending machines alongside other brands.

“We never intended to sell to anybody else,” Whitney said. “But our clients would call and say that their customers kept calling and asking them for PUSH sodas. Then people started calling us directly and asking for more flavors.

PUSH Beverages therefore introduced new flavors and began offering its products to local hospitals, recreation centers, restaurants and more before selling off the vending company entirely in 2013 to Compass Group.

The company’s bread and butter, Whitney said, is the more than a dozen flavors of carbonated and noncarbonated beverages sold in 20-ounce bottles and 12-ounce cans, including its highly-caffeinated, citrus-flavored soda, Arctic Rain.

However, the company also offers healthier options with its line of Tribe Teas, eight flavors of real brewed tea devoid of high-fructose corn syrup and preservatives, and PUSH-2-0, enhanced water that uses reverse osmosis for maximum crispness and purity.

“Our costs are pretty much in line with your Cokes and Pepsis, between $1.25 and $1.75 depending on the region and the type of venue, but we put more profit in the business owners’ hands,” Whitney said. “The commissaries, the vending operators, the cafeteria and gift shop operators, they might only make 20 cents with Coke and Pepsi, but with PUSH, they might make 50 cents.

“Drinks typically break even for them; with us, they can finally profit on beverages.”

Whitney said that, while she and her colleagues had never intended to fight against Goliaths, this is how the small, private employer of nearly 25 has held its own as a newcomer in the industry.

“Coke and Pepsi approach their customers with one or two price raises each year, and we haven’t raised prices in seven years,” she said. “We’re able to keep our prices down by increasing our volumes — I get better prices on caps, for example, if I buy 5 million over 1 million, due to volume discounts.”

Still, it can be tough to fight against large, powerful corporations with practically unlimited resources, Whitney said.

“Some people are of course afraid to buy what they don’t know, and they have the advertising to back them up, but we’ve also seen companies strong-armed, as in, ‘If you carry PUSH Orange Soda instead of Fanta, I won’t sell you any Coke,’” Whitney said. “But, the good news is that we don’t have any shareholders to worry about. That allows us to sometimes take risks with customers that Coke and Pepsi never would be able to.

“If we have a good feeling about somebody, we’ll deliver them a trailer full of product and vending equipment, where Coke and Pepsi might not even give them one machine.”

What Whitney said she worries about more than her competitors is the constant legislation facing her new industry.

“The U.S. Food and Drug Administration, for example, just requested front-of-package calorie counts, so we had to dump all of our labels and pay for a new design and new labels to meet guidelines,” she said. “Every time they change their guidelines, we have to accommodate.”

Including where PUSH Beverages can be sold.

“We used to sell our products in schools, but with Michelle Obama’s intensified focus on school lunch programs, only diet sodas can now be sold,” Whitney said. “That put us out of the school business — but we made up for it with the prison business.”

Whitney said this is because many of her clients are commissary and food service companies that serve prison populations.

“Prisoners make something like 36 cents a day, so their commissary funds are very limited,” she said. “They can better afford our drinks.”

This business segment in particular has resulted in a lot of unexpected publicity for PUSH Beverages, Whitney added.

“We’ve been featured on ‘Lock Up’ on a regular basis as they interview an inmate who is sipping our soda,” she said. “And, I don’t even know how it happened, but one of our vending machines ended up on a new Netflix series, which I thought was unique.

“It’s 10 p.m. and everyone from work is texting me pictures of their televisions. I was like, wow — we didn’t even pay for product placement!”

With the continued double-digit growth that PUSH Beverages has experienced over the last couple of years, Whitney said she and her company feel it only is right to give back to the community.

“We donate product to a lot of local Color Runs and 5Ks, for example, and in working with the National Federation of the Blind, we decided to include a Braille literacy message on each of our PUSH-2-0 water bottles to raise awareness,” she said. “We also made a large donation to WE Fit Wellness, a wellness program for people with disabilities, and offer water at all of their physical fitness events.”

“Because we have more available pallets and trailers of water available and on the ground than a lot of other beverage companies, we are able to donate trailers of waters to people,” Whitney said. “Beginning with Hurricane Sandy and even the hurricanes we experienced this fall, a lot of communities were without water.”

Giving back also gives the company more opportunities to put PUSH drinks in the hands of more people, which in turn, creates more widespread demand.

“Right now, we are able to serve 38 states from Texas on East,” Whitney said. “Because shipping is so cost-prohibitive to the Western states, we are actually in the process of setting up a Western manufacturing facility, which should be completed within the next six to eight months.”

Whitney said she also would like to increase PUSH Beverages’ exporting and find ways into convenience and retail chains soon.

“But, overall, I think I’d like us to be a household name,” she said. “Like Coke and Pepsi, I’d like for every home to be stocked with PUSH Beverages.”