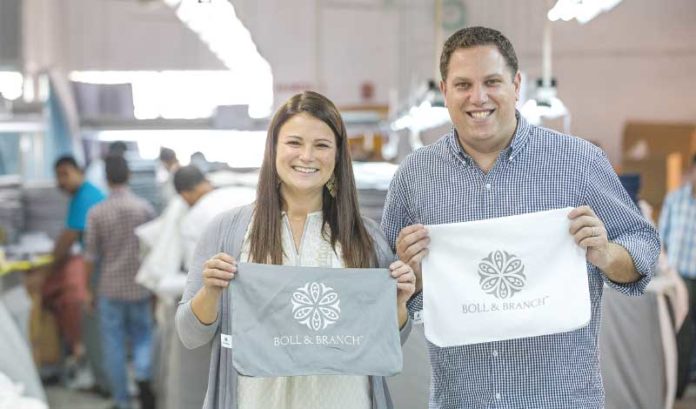 They returned home with the ultimate do-it-yourself project — one that has made both of them superstars in the business world.

The Tannens said they found an industry in dire need of ethical and sustainable change and decided to found Boll & Branch, an organic luxury linens company, in Summit.

And all of it comes from a basic principle, Scott Tannen, CEO, said.

“Our mission has not once changed from when it was just Missy and I in a small office in Chatham,” he said.

“From Day One, we have been committed to making the very best products possible, sourcing them from wherever in the world we knew people could make them best and, most importantly, leaving those places in better conditions than when we found them by applying different ethical standards to the way things always have been done.

“What we have developed is this incredibly loyal base of customers that just keeps coming back and telling all of their friends.”

Missy Tannen, head of product design and development, said it has been a wild ride.

“No matter what stage of business you are in, there are equal, if not more, challenges, pressures and risks along the way,” she said. “In the beginning, I kept saying, I feel like I am on a roller coaster that I’m ready to hop off from for a while to walk around and get some funnel cake.

“But whoops, OK, I’m back on the ride, and it just keeps going. I had no idea of the level that our success would continue to compound at. But, because we are so driven and hard-working, we never will see success as being finished — we are never going to stop to get some funnel cake.”

Missy Tannen, a former third-grade teacher in Bridgewater, had stayed home for nearly a decade to raise her and Scott Tannen’s three daughters.

Scott Tannen had previously been president and founder of Funtank, a developer and publisher of branded online, mobile and social games, and in marketing, at companies including Wrigley and Mondelēz International.

When it came time to renovate their master bedroom, Missy Tannen said she was not satisfied with the information available on the quality and origin of in-store bed sheets.

“Even when I traveled to the Garment District of New York for answers, I realized no one really knew where their materials came from or even what conditions were like in their factories,” Scott Tannen said.

Further research revealed multiple harrowing issues within the overall textiles industry: Conventionally grown cotton uses more dangerous pesticides than any other crop in the world; workers, including children, often are forced to work in poorly constructed and dangerous factories; and the average life expectancy of a cotton farmer in India is 35, due to chemical exposure, debt-related suicide, unsafe working conditions and more.

“I must have searched through thousands of cotton suppliers and mills around the world, trying to find a cotton farm that didn’t use chemicals,” Scott Tannen said.

Finally, he discovered Chetna Organic, a cooperative of more than 100 cotton farms in northeastern India that supports sustainable, ethical farming, community development and business education by helping members first procure organic, non-genetically modified cotton seeds without pesticides and then turn it into textiles.

That is when the Tannens decided to go into business themselves, designing and manufacturing bed sheets at three certified factories in India where Chetna Organic and Fair Trade U.S.A. worked to set the price of cotton according to local living wages while governing the selling process to prevent marginalization.

Though the price of that cotton translated into costs nearly 30 percent over commodity pricing — and therefore resulted in a higher price for consumers — the Tannens said they were pleasantly surprised with what happened next.

Within six weeks of launching BollandBranch.com in 2014, the company sold more sets of sheets than they had anticipated selling in their first 18 months in business.

“When we first started, of all the cotton that Chetna Organic was farming, less than 30 percent was sold as Fair Trade organic, with the rest being sold off as commercial for whatever money they could get,” Scott Tannen said. “Now that we are buying a significant portion of it, they are selling 100 percent.”

This means, he added, that farmers and their communities now have the capital they need to start investing in themselves, giving future generations opportunities to get an education, qualify for better jobs, obtain health care and more.

As Boll & Branch continues to grow, so do the people it works with.

The direct-to-consumer bedding company moved from Chatham to a larger office in Summit with five employees in 2015.

As the largest and fastest-growing consumer of fair trade organic cotton worldwide, according to Textile Change, Boll & Branch’s mills in India and elsewhere also continue to help support thousands of factory workers, farmers and their families, by paying them above a living wage with benefits.

“It fills me with pride that there are tens of thousands of people who are for the first time in their lives living above the poverty line because we are sourcing cotton in a different way,” Scott Tannen said.

“Thank goodness that we simply made the decision back then to source cotton responsibility and fairly, while treating our factory workers like they, too, are an extension of our team, our friends and our family,” Missy Tannen said.

Boll & Branch now works with a total of 13 factories all over the world.

“For example, we are making our flannel with a family-owned factory in Portugal, where flannel was originally made to help keep fishermen warm,” Scott Tannen said. “We  also are working with a multigenerational family facility in Cincinnati, Ohio, where Missy is from, to fill and finish all our pillows and down comforters.

“We have successfully married the old and new world by taking our aptitude for technology and layering it on top of the work of heritage artisans to deliver a better product to consumers.”

While Boll & Branch started by manufacturing just a few trim styles and colored eco-friendly sheets and pillowcases made from 100 percent organic hand-picked cotton (Queen, $240), the company has since expanded into additional fabrics, such as percale, flannel and linen, with multiple prints and designs; duvet covers and shams; blankets and quilts; crib sets; and bath towels and robes.

“Listening to what our customers were looking for next helped us with our natural product evolution,” Missy Tannen said. “For example, customers kept asking our in-house customer service team where they might recommend purchasing a pillow or duvet insert. And we thought, oh, my goodness, how have we never before considered making what goes inside of our products?”

Three years in the making, Boll & Branch launched in March its pillows and duvet inserts, made in the U.S., responsibly sourced and filled with down ($150) or PrimaLoft ($80), an eco-friendly, vegan and allergen-free alternative to down.

“We were careful to source the down from farms that already were raising ducks for food, making use out of something that simply would have been thrown away otherwise,” Scott Tannen said.

Boll & Branch sold out of what the Tannens said they thought would amount to six months’ worth of inventory in less than four days.

“We now will have in stock nearly 15 times that amount by the end of July,” Scott Tannen said.

Selling out of pillows might be what one calls a “Champagne problem,” but Scott Tannen said he still calls it a problem, nonetheless.

“Scarcity is cute, but not for long,” he said. “If someone needs a pillow and we don’t have it in stock, they may go somewhere else.

“Our goal from Day One has been to educate the public about bedding, and when the public is educated, we are the default choice. But when you get someone to start thinking differently and then you don’t have what they want, it’s a great opportunity for someone else to come in and capitalize on all of the good will you are creating.”

While Scott Tannen said this has been a good lesson in managing the company’s speed of growth, he said he is not very concerned with the recent surge in direct-to-consumer brands, including in the textiles and bedding industries.

“It still is very difficult to predictively buy good bedding,” he said. “Knowing that at our core, in everything that we do, from the way Missy designs the product to how and where we manufacture, is inherently different, we leave it up to the customer to decide who is taking what they already can buy at a department store and putting a fancy brand label on it and who actually is creating something different.

“It’s not difficult to make a bed sheet, but it is really hard to make a good one, and we have been successful in doing that.”

As the capital markets grow tighter, he added, he believes that many direct-to-consumer brands may not even be able to keep up.

Boll & Branch, on the other hand, is a young and profitable company that currently funds any future growth with its own cash flow.

“I wouldn’t have to wait for the next round of venture capital to stay in business,” Scott Tannen said.

So, despite early retail initiatives and constantly improving ever-expanding product lines, they are pacing themselves.

“When you have tens of thousands of people who are now living the way they are because of the way we have approached building this business, I never would want that to be diminished,” Scott Tannen said.

“There are now thousands of people who are solely dedicated to making Boll & Branch products and I want to always make sure that I have done everything imaginable to make the best products, to do my absolutely best for their livelihood,” Missy Tannen said.

Boll & Branch — the first-ever bedding brand to be Fair Trade and Global Organic Textile Standard certified — makes sure that a portion of every purchase goes toward Not for Sale, an organization dedicated to ending human trafficking and the inhumane treatment of more than 30 million modern-day slaves.