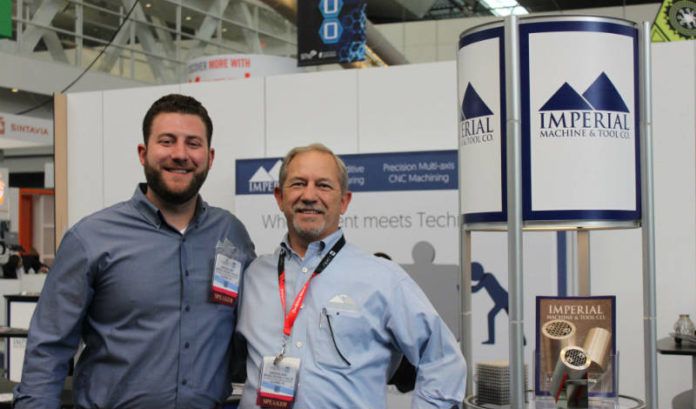 Imperial Machine & Tool Co., a 75-year-old machining, fabricating and assembly firm based in Columbia, was named the U.S. Small Business Administration’s 2018 Regional Subcontractor of the Year for Region II, the SBA announced this week.

Imperial Machine & Tool beat out nine other subcontracting firms from the region, which includes New Jersey, New York, Puerto Rico and the U.S. Virgin Islands, to receive the award. The fourth-generation firm has 40 employees based out of its 33,000-square-foot, state-of-the-art manufacturing and test facility.

“Each of our employees shares a sense of commitment and pride in their work that contributes to the success we enjoy today, and has put us in a position to be recognized as SBA’s 2018 Regional Subcontractor of the Year,” President Chris Joest said in a prepared statement.

“To be nominated by MIT Lincoln Laboratory, a well-respected and renowned R&D facility, is truly an honor, and I can honestly say each of us here is grateful to the SBA for this recognition and prestigious award,” Joest said.

Imperial Machine & Tool was selected for the honor based on criteria including technical and management capability; financial strength; customer interface and support; innovativeness of products offered; and ability to deliver quality services on time and at competitive cost to the U.S. government.

“This is a small business that has a rich history in manufacturing and providing its customers with technically challenging and complex components,” Bulger said in a statement. “Imperial Machine & Tool Co. is a prime example why small businesses across the country are so vital to supplying the U.S. government with superior quality services and goods.”

The company serves the semiconductor, technology, energy, aerospace and defense industries, among others. It was established in 1943 by Michael Joest, Chris Joest’s grandfather, and counts Chris Joest’s son, Christian Joest, among its leaders.

“Small businesses like Imperial Machine & Tool Co. continue to play an important role in the manufacturing sector in New Jersey,” SBA New Jersey District Director Al Titone said in a statement. “By embracing technology and exploring avenues like metal 3D printing, Chris Joest and his staff have raised the bar and developed a blueprint for all small manufacturers to follow.”

Champions of the C-Suite: ROI-NJ names financial, tech leaders who will...