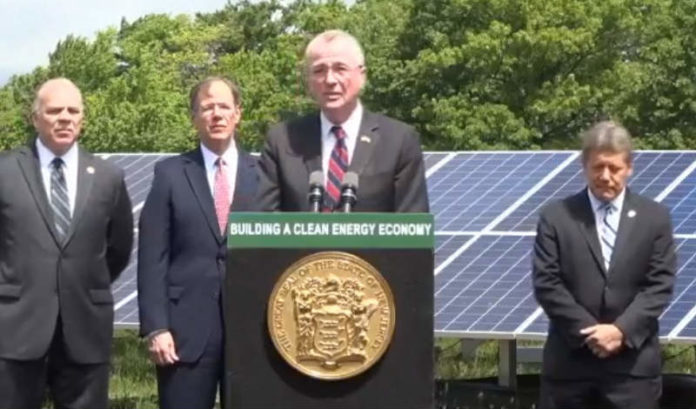 The nuclear subsidy bill, which faced heavy opposition from many consumer and environmental groups, would provide Public Service Enterprise Group with a potential annual subsidy from the state (if it is deemed necessary after a review by the Board of Public Utilities) of up to $300 million, in order to support the decreasingly profitable — but clean — nuclear energy.

“These facilities support 5,800 jobs, not to mention the ancillary impact of those jobs,” Murphy said. “Those are good-paying, union jobs that support a middle-class family.”

“With Gov. Murphy’s exciting agenda to advance renewable energy and the guidance and oversight of the Board of Public Utilities, New Jersey is poised to return to its place as a national leader in clean energy,” said BPU President Joseph Fiordaliso. “We are proud to have already deployed 2.5 gigawatts of solar energy in the state and look forward to expanding our portfolio of renewable energy projects.”

This bill also helps PSEG feel confident in its ability to bid to provide nuclear capacity for the 2021-2022 fiscal year, the results of which are due from grid operator PJM Interconnection on Wednesday.

In a statement Wednesday, Izzo applauded Murphy’s signing of the bill and executive order.

“Together, these measures create a forward-looking energy policy that makes New Jersey a national leader in advancing clean energy,” he said “This package follows through on Gov. Phil Murphy’s pledge that an enlightened, comprehensive energy policy would be a top priority of his administration. These new laws will preserve and create good-paying jobs and spur billions of dollars in investment in clean energy and energy efficiency across the state. And will help preserve nuclear energy, which generates nearly 40 percent of the state’s electricity and more than 90 percent of its carbon-free generation. Our company looks forward to working with state leaders to make sure the promise of this legislation is achieved.”

“Exelon commends New Jersey Gov. Phil Murphy for taking a national leadership role in recognizing the environmental value of the state’s nuclear fleet, advancing other clean energy policies and putting New Jersey on a path to achieve its carbon emissions goals by signing into law a package of legislation that will help to preserve 90 percent of New Jersey’s carbon-free power, protect 5,800 jobs and save residents and businesses $400 million on their electric bills,” the statement said.

Izzo told ROI-NJ that, despite criticism from competitors and the public, he was confident about the bill’s protections for the ratepayers.

“We are asking for a safety net that could be less than $300 million annually, with built-in protections. The BPU could reduce the amount if a price on carbon emissions (is developed) and they can reduce if (the Federal Energy Regulatory Commission) comes with (incentives) for fuel diversity. Also, if it becomes too expensive for New Jersey to pay, the state has the right to say no. The cap in our bill would be a $10 increase in the energy bills,” Izzo said.

The new initiatives do, in fact, call for zero-emission credits for the state, in addition to ramping up wind and solar energy, and calling for greater renewable energy storage.

“This is a great day for New Jersey,” Izzo said. “Thanks to the leadership and vision of Gov. Murphy, Senate President Steve Sweeney and Assembly Speaker Craig Coughlin, we are on track toward the healthy and prosperous clean energy future this state wants and needs. We also appreciate the perseverance and foresight of the legislative sponsors, led by Sen. Bob Smith and Assemblyman Jack McKeon, for their tireless efforts in advancing thoughtful, comprehensive measures intended to meet the state’s energy demands and environmental needs of tomorrow.”

Subsidies for the plants, which most estimates indicate would cost ratepayers between $35-50 annually, drew heavy criticism from consumer and environmental groups — and were a cause for the delay of the signings.

One of the biggest critics of the subsidy bill, the N.J. Coalition for Fair Energy, said there is likely going to be legal action following the signings — a strategy that has been used in other states where Exelon received subsidies for its nuclear plants.

“Today’s news is a disappointment for many, and a major setback for ratepayers,” said spokesperson Matt Fossen. “While PSEG shareholders just became more prosperous, the reality is New Jersey consumers now have to confront higher electric bills for no reason other than to bail out PSEG management’s bad business decisions. We wish officials would’ve waited to make a decision until after the results of PJM’s capacity auction were announced, which will be literally only hours after the governor’s signing, but this issue is not over — and it’s unfortunate the courts may be necessary to bring a dose of reason to the debate.”

“As part of Exelon’s merger with Pepco Holdings, the company committed to investing $6.5 million in a workforce development initiative to expand training programs for energy-related jobs,” ACE said in a statement. “This initiative, which will kick off this summer, includes five programs with three vocational schools and four workforce development boards across southern New Jersey. It will help train the workforce needed to fill these future energy jobs, including the build out of the underlying infrastructure necessary to facilitate the growth of the clean energy economy.”

“We applaud Gov. Murphy’s commitment to driving a clean and sustainable energy future for all New Jerseyans, and today’s signing is another example of his leadership role in this important policy initiative,” said Dave Velazquez, CEO and president of Pepco, which includes Atlantic City Electric. “We are committed to partnering with stakeholders across the state to ensure that this legislation leads to the development of new and innovative programs and initiatives that will create new jobs in the energy field and have a positive impact on our customers, our environment and the communities we serve.”

Energy’s role in N.J.’s future: 5 questions with Melissa Orsen and...