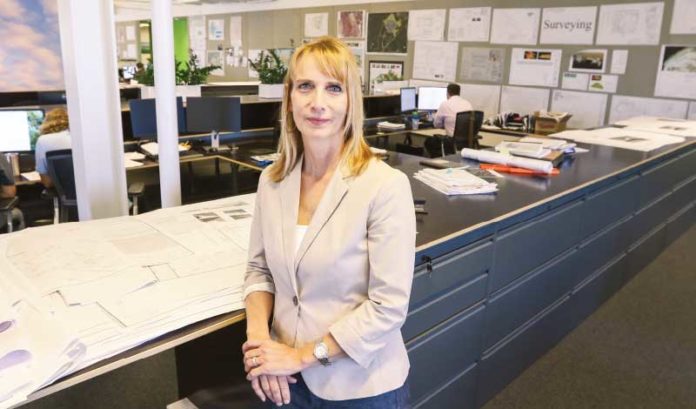 The year was 1990, Jayne Warne said, and she and her new husband were either going to make it big — or go bankrupt and get divorced.

“We had just gotten married, we had not yet had kids and we thought, what did we have to lose?” she said.

After graduating from Rutgers University in the late 1980s, Warne met Dennis Petrocelli, a geologist, while working at an engineering firm.

“We both had clients who were asking us to work independently of our company, and it seemed like the opportunity arose at the right time,” Warne said. “We got married and started our business that same year on our credit cards because nobody would give us a loan.”

“It was a tough first couple of years, but we kept plugging through, doing a great job, and we just kept getting more work.”

They turned their business into a $35 million civil engineering and environmental services firm in Florham Park.

And they are still together.

“We were so young when we started that I don’t think we realized how difficult it actually was,” Warne said.

Matrix New World Engineering performs important and often necessary work in both natural and manmade worlds throughout the U.S. while streamlining processes, improving results and lowering costs for clients.

“We work on hundreds of projects per year, ranging anywhere from $5,000 ‘Phase Ones’ to multimillion-dollar projects,” Warne, president, said.

The firm, which works mostly in the public sector, is a leader in programs such as geotechnical and civil engineering design, environmental assessments, investigations and remediations, and ecological restoration.

That is rather important for the work Matrix New World Engineering often finds itself doing.

For example, the firm was heavily involved with the restoration of the Jersey Shore and other areas affected by Hurricane Sandy, including the New York City subway system.

“We are extremely gratified to be part of projects that ensure significant measures are taken to stop this from happening in the future,” Warne said.

These days, she added, Matrix New World Engineering often is asked to create resiliency studies for both public agencies and the private sector when it comes to post-hurricane infrastructure readiness.

“We had at one time about 70 people working down in the Gulf on the BP oil spill,” Warne said. “We hired them over a weekend and put them on a flight on Monday.

“We don’t have a lot of layers of management and are not bogged down with paperwork, so my husband and I have that ability to simply make a decision and go.”

Their work, Warne said, often dictates where the business will go next.

“We still have about 10 people working in our Louisiana office, which is a residual effect of working there during the oil spill,” she said. “We happened to create a lot of relationships while we were there, and ended up with more clients.”

That is how Matrix New World Engineering has grown over 28 years.

For example, some sites in Arizona, such as the Phoenix-Goodyear Airport, are governed and funded by the federal Comprehensive Environmental Response, Compensation and Liability Act of 1980, commonly known as Superfund, Warne said.

“We bought a small company in Phoenix to help us support such a large project there and have since been growing that office,” she added.

While some projects may take years to complete, others have extremely tight deadlines.

“We were just awarded an interesting job in Puerto Rico for the Maritime Administration within the U.S. Department of Transportation, doing structural and environmental analysis of more than a dozen piers that were destroyed during the most recent hurricane,” Warne said. “We were awarded the project four weeks ago and it must be completed in eight, due to the Federal Emergency Management Agency’s funding running out in May.”

When one project ends, another often begins, Warne said.

“After submitting our evaluation, we decided to submit a new proposal to complete 30 percent of the design documents for actual construction,” she said.

Matrix New World Engineering does not get a lot of its work through bids or cold calls, but rather by creating relationships.

“It’s all about the people we know and the other companies that we’ve worked with,” Warne said. “I also would say that about 20 percent of our business is through our certification as a woman-owned business.”

Warne, who owns the business entirely, added that, although nearly half of her 150 employees are women, it is extremely difficult to find — and keep — women engineers.

“That is simply the truth,” she said. “We employ a lot of women environmental scientists, biologists, all types, but engineers? I only employ a few.

“You have to have a thick skin, for sure, but my advice to women coming into this field is to stick with it if you are truly interested in this work. The job really can be quite rewarding.”

To make the demanding job a bit easier, Warne — herself a mother of three children, ages 20, 18 and 16 — said she very much believes in and promotes flexibility.

“Everyone whom I hire is a professional who will get their work done whether their children are sick or whether they have to leave early to go to a baseball game,” she said. “They may work at home or work a couple hours at night to get a report out, but I trust it will all happen.”

“We certainly want to keep growing, and, in particular, I would like to hire senior people who can bring work and clients with them,” Warne said.

Looking back, Warne said she is proud and shocked that Matrix New World Engineering has become the business it is today.

“To go from nothing 28 years ago to becoming a well-known and working engineering firm today, well, I think it’s been a big success,” she said.