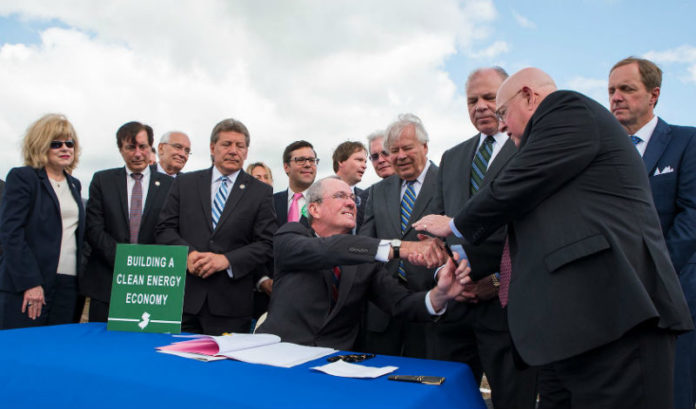 The package of energy bills and executive order signed by Gov. Phil Murphy are meant to establish and modify clean energy and energy efficient programs, the governor said.

While the potential $300 million annual subsidy to Public Service Enterprise Group to help maintain the state’s two nuclear plants got significant attention, the signings had other impacts on energy in the state, including:

The last two are incentive programs that affect solar, wind and nuclear energies.

Advocates of nuclear energy blame generous incentives to solar as part of the reason nuclear is unable to turn profits, in addition to being faced with fierce competition from natural gas.

The Zero Emission Certificate program, which has been an unsuccessful but long sought-after strategy at the federal level, also has its critics because the tariff charged to New Jersey residents benefits the users of the electricity grid that spans several states.

Criticisms aside, BPU President Joseph Fiordaliso said the governor’s actions will have impact.

“With Gov. Murphy’s exciting agenda to advance renewable energy and the guidance and oversight of the Board of Public Utilities, New Jersey is poised to return to its place as a national leader in clean energy,” he said. “We are proud to have already deployed 2.5 gigawatts of solar energy in the state and look forward to expanding our portfolio of renewable energy projects.”

Stephen Kisker, chair of Chiesa Shahinian & Giantomasi’s Renewable Energy and Sustainability Group, said that, although nuclear energy is not renewable, it is a zero-emission source that New Jersey should use.

“If we lose these facilities, they will likely need to be replaced by fossil fuel plants, which are not zero emission,” he said. “In light of the state’s goal of increasing the amount of zero emission energy generated and used in the state, and the state’s agreement to subsidize other forms of zero emission electricity like solar and wind, why not nuclear?”

On the changes of solar incentives, Kisker said they are needed to help increase the importance of solar energy generation in the state.

“Realizing the important role solar energy plays in New Jersey’s clean energy goals, it sets the stage for studies to be conducted to thoughtfully and effectively develop New Jersey’s next solar incentive program,” Kisker said. “Solar is a remarkable success story in New Jersey. New Jersey is one of the Top 5 states in the country for solar installations. The price of solar installations has fallen from $8 per watt to around $2 per watt over the last 10 years. System efficiency has increased and the emergence of battery storage has made solar even more attractive.

“For the next few years, the federal government will continue to award each solar project in the country an Investment Tax Credit equal to 30 percent of the cost of the project — that is millions of federal tax dollars pouring into New Jersey. This bill will also ensure that the state’s solar program remains attractive to solar investors during the period in which the federal government is providing large incentives, which will create much-needed jobs and tax revenue in New Jersey.”

Senate President Steve Sweeney (D-West Deptford) said the cost of supporting the nuclear market was less than the impact if the plants closed.

“The nuclear industry is struggling, and this poses a real threat to consumer prices, the environment and the state’s economy,” he said. “There is a cost to this plan, but the cost of ignoring the threat and allowing our nuclear plants to close is far worse. If these plants close, jobs will be lost, consumers will pay more in utility bills and the increased use of carbon-based energy will be harmful to the environment.”

Murphy, during the signing ceremony, stressed the measures will have economic impact for the state’s workforce, too.

“These facilities support 5,800 jobs, not to mention the ancillary impact of those jobs,” Murphy said. “Those are good-paying, union jobs that support a middle-class family.”

“Together, these measures create a forward-looking energy policy that makes New Jersey a national leader in advancing clean energy,” he said. “This package follows through on Gov. Phil Murphy’s pledge that an enlightened, comprehensive energy policy would be a top priority of his administration.

“These new laws will preserve and create good-paying jobs and spur billions of dollars in investment in clean energy and energy efficiency across the state. And will help preserve nuclear energy, which generates nearly 40 percent of the state’s electricity and more than 90 percent of its carbon-free generation. Our company looks forward to working with state leaders to make sure the promise of this legislation is achieved.”