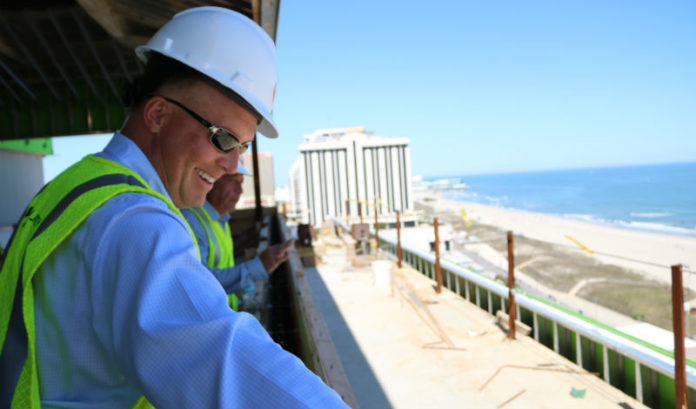 The contemporary design of the new Atlantic City office for South Jersey Gas, and the adjacent satellite campus for Stockton University, are changing the skyline of Atlantic City’s gateway along the Black Horse Pike, otherwise known as Route 30.

But the hard hat tour of South Jersey Gas on Thursday revealed something else: The views of the city and the ocean looking out from the new six-story office are just as impressive.

The new 75,000-square-foot headquarters for the utility will be home to a communications center, dispatch center and customer service center.

But officials are equally as proud to point out it includes all the things a modern workforce is asking for, including an open space design and numerous huddle and conference room.

The amenities, including a fitness center and café, and views from the building were so enticing that SJG officials joked their current headquarters in Folsom is going to need some major upgrades to compare.

“As the construction of our new headquarters nears its targeted fall completion, we wanted to celebrate our progress to date with the many stakeholders who have supported this project,” South Jersey President Dave Robbins said.

Construction is on time and under budget. But getting to this point took the will — and money — of a few entities.

Chris Paladino, CEO of AC Devco, which has led the construction of the new buildings along with builder Joseph Jingoli & Son, said the project had some growing pains.

“A lot of the tough parts of this was before we got started,” he said. “It was trying to get that group of people that weren’t used to working together to row in the same direction.

“Once everyone bought in, I was very impressed with the amount of coordination and partnership.”

Paladino said the project has been running smoothly — and it has created savings in its efficiency.

“Stockton is able to do things that they didn’t think they would have the resources to do,” he said.

That includes putting in kitchen and catering equipment, among other things.

And while the $210 million partnership project is revitalizing a few plots of land that have been vacant for ages, there is still a long way to go for the city.

“I think this shows what is possible,” Paladino said. “I think it’s a couple pages out of a potential playbook. It’s incremental. Urban redevelopment is neighborhood by neighborhood, intersection by intersection, block by block.

“Disney is not coming to save Atlantic City, there is no bolt of lightning. There is something about momentum … you always have to be moving forward because, if you are not, in a city, you’re going to slip backward.”

Ideally, to create the momentum that Atlantic City needs, at least five new projects need to happen, he said.

So far, there have been a number of casino openings and renovations over the years, but not as many impactful nongaming projects.

But it can’t stop there, Paladino said.

“If we take too much satisfaction in the grand openings, we’ll certainly put at risk the momentum we’ve built,” he said.

For South Jersey Gas, though, the move to Atlantic City has its own significance — the company was originally located there in the 1900s.

“We consider this return to Atlantic City as a kind of homecoming,” Robbins said. “We’re energized by the prospect of returning to our roots and helping Atlantic City return to the vibrant, bustling, beach venue that we know it to be.”

Controversial (and enormously costly) provision requiring electrification of all boilers in...