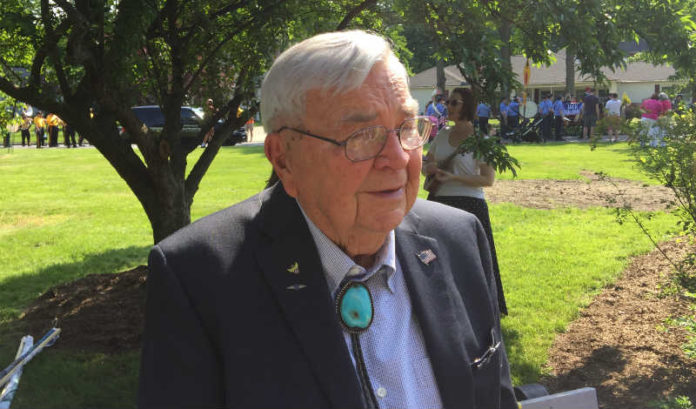 As he listened to the moving tribute about a New Jersey World War II hero, tears began rolling down his face.

He said they always do during Memorial Day celebrations.

While the rest of the crowd Saturday at the annual Morris Plains Memorial Day celebration recalled World War II stories they had read in textbooks or video documentaries they had seen, Lt. Col. Bob Vaucher’s mind wandered back to his time in the Pacific theater. He lived it.

Vaucher, 99, is a Bridgewater resident and among the quickly dwindling number of WWII veterans.

“That story brought back so many memories,” he said afterward. “Tears were running down from my eyes. It was so emotional.

“It reminds me of all the people who served and never came back.”

Vaucher was honored at the ceremony by Morris Plains Mayor Frank Dreutzler for his exemplary career in the military, one that saw him fly more than three dozen different types of aircraft on 117 combat missions during his 46 months of active Army Air Corps service.

Vaucher, still sharp, said he feels it is important to attend events and speak at schools to keep the memories of others alive. It’s why he stood at every appropriate moment.

“I come to ceremonies like this regularly,” he said.

It’s great that he still can; his own story is worth telling.

Vaucher is one of the finest military heroes in New Jersey history — one with a prominent role in some of WWII’s most notable moments.

In 1943, Vaucher accepted the first B-29 Superfortress bomber to come off the assembly line from Boeing for the Army Air Corps, and delivered it to the 40th Bomb Group in Kansas.

He also was selected as the mission commander for the show of force flyover of 525 B-29s during the surrender ceremony on the battleship USS Missouri that ended WWII on Sept. 2, 1945.

His military career included a number of other firsts, including:

Vaucher was discharged in 1946 but served in the reserves until 1962.

He has never lost his lifelong love of aviation, and only recently gave up a license he had for more than 60 years.

But for all his accomplishments, he told the small group that briefly gathered around him after the ceremony of his gratitude for others.

He talked of a combat mission that he barely returned from — landing in a plane hit by so much enemy fire it never flew again.

He talked of his gratefulness for the Marines who served — and perished — at the battle of Iwo Jima.

“I’m standing here because 6,100 Marines lost their lives,” Vaucher said. “If they hadn’t taken it, I would probably be in a shark’s belly somewhere in the Pacific.”

That’s why Vaucher got so emotional while listening to the story of New Jersey’s John Basilone, the only Marine who earned both the Medal of Honor and the Navy Cross in WWII.

The second honor was awarded posthumously.

“I was thinking about different friends who never made it,” he said.

More than 70 years later, it’s still fresh in his mind.

“I remember it like it was yesterday,” he said. “I sure do.”

Building a stronger and fairer New Jersey: An address by Gov....