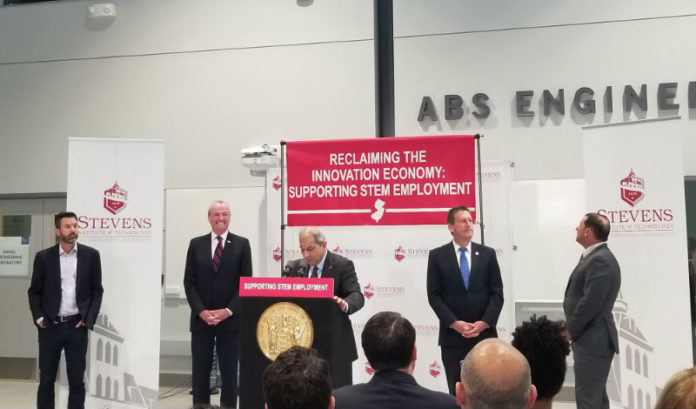 Gov. Phil Murphy has repeatedly said one of the biggest keys to growing the New Jersey economy is keeping its best and brightest students in state.

Tuesday morning at Stevens Institute of Technology in Hoboken, he unveiled a two-tiered plan to help do just that: a loan forgiveness program and a paid internship program. Each would come with a requirement that the student remain in-state for a certain number of years.

Murphy made the announcement at Stevens, a university already known for its rich co-op program for students.

“A lot of private sector firms are stepping up already and doing what we are suggesting here,” Murphy said.

The details are in the works, but the “two-track approach” framework Murphy unveiled includes:

Murphy said the program would cost the state $12 million annually.

When asked why the state should help companies, which have profit margins to work with and already support interns, Sullens said any amount of money helps spur more hiring.

“I think when we look at the dollars, this isn’t a make or break,” he said “We aren’t going to do internships because … we are going to get $1,000 or $1,500 from the state. But it does allow us to do more internships and be more aggressive with those investments.”

How the program will be structured remains in question. Sullens said he has plenty of ideas.

“In terms of loan forgiveness … one of the challenges for us is, how do you structure it in a way that is beneficial to employees, doesn’t incur extra taxes?” he said. “There are all kinds of things that go into it.”

Murphy said his administration has identified STEM occupations as the jobs with the most projected growth. And, considering the average college student graduates with $30,000 in debt, Murphy said helping to pay about 25 percent of that will go a long way to slow the brain drain the state is seeing.

He added that, in addition to keeping students in the state, the program will help diversify the workforce by reaching those for whom higher education and unpaid internships are barriers.

Sarlo emphasized that, although the proposals come with price tags for the state, the return on investment — for a student to live here and potentially plant roots — is greater.

Zwicker emphasized that, in his own study of the industries, 90 percent of students who get paid internships (versus the norm, unpaid) are more likely to stay in the state.

Studies show the younger generation is leaving New Jersey because of the cost of the state. And that they have a tendency to avoid commitment to one company for long periods of time.

Zwicker said that’s true, in a bubble. But, he said addressing affordable housing, investing in higher education and infrastructure simultaneously helps alleviate some of those problems.

“We need there to be more places that millennials want to be besides Jersey City or Hoboken,” he said.

Passing legislation to address the issues is the easy part, Zwicker said, because without it, the state is in big trouble.

Sullens said that, despite some of these obstacles, he has managed to keep employees in the state, preaching it is a good alternative to a long and expensive daily commute to New York City.

“It goes back to: How do you brand New Jersey?” he said. “How do we get people to know we exist so that employees here in New Jersey see that positive trade-off (of not having to commute).”

Nariman Farvardin, president of Stevens, said the announcement is a step in the right direction, but he said solving the problem requires much more.

However, he said, if this step by the administration helps keep the top percentile of graduates in the state, it will pay great dividends.

Especially for high growth areas, which Favardin identifies as any industry which focuses on technology and the use of it in traditional sectors.

“If you want to re-energize the economy, that’s where the opportunity is,” he said.

Final Rutgers-Eagleton Poll on Christie is all bad news