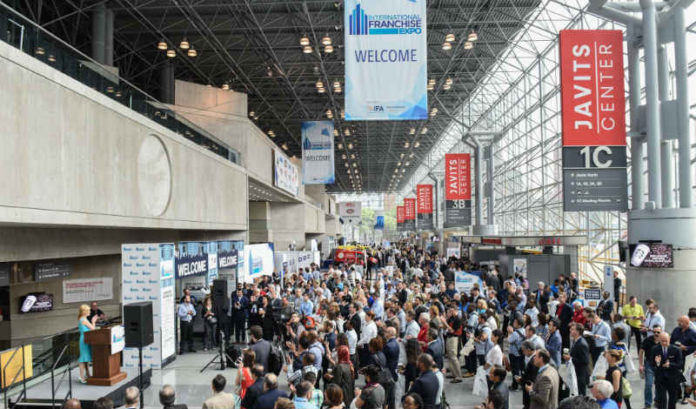 The 28th International Franchise Expo at the Javits Center in Manhattan is expected to draw more than 15,000 attendees from more than 100 countries around the world and more than 400 exhibitors.

Yet, New Jersey will have one of the largest representation of franchisors at this year’s event, Thomas Portesy, CEO and president of MFV Expositions, said.

“There are a lot of successful entrepreneurs in the state who have said, ‘Our business is duplicatable,’” he said. “Therefore, the state has become home to many franchise businesses for a lot of different brands.”

MFV Expositions is headquartered in Paramus.

The family-owned event planning company responsible for the International Franchise Expo — and many more events like it — employs 22 in New Jersey and 20 in Mexico while frequently working with strategic partners abroad.

Operating as a subsidiary and the franchise group division of the Comexposium Group, one of the world’s leading event organizers, MFV Expositions earns between $15 million and $20 million in annual revenue, based on the success of its subsidiaries and partners.

These events are key to connecting would-be business owners with franchise concepts across industries, Portesy said.

“As a 20-year-old brand that started in New Jersey, the Lightbridge Academy franchise has always valued the International Franchise Expo for its ability to connect us with the people we need and want to see to expand in the Northeast, where our concentric development approach is alive and well,” Mele said. “We’ve attended this show every year since it’s been at the Javits Center and it’s always drawn a good number of quality people, from the tri-state area all the way down to the mid-Atlantic states, who have the wherewithal to work with us.”

Duane Mora, senior vice president of partner relations and franchise sales at Jackson Hewitt Tax Service, headquartered in Jersey City, said the International Franchise Expo is one of the best events for potential franchisees to learn what it takes to be successful.

“The opportunities to invest and speak face-to-face with leading franchise brands are made available to them,” Mora said. “For Jackson Hewitt, it’s an opportunity to share why becoming a Jackson Hewitt franchisee is an investment both as a business and as part of a team that’s here to support you day in and day out as you grow.”

In New Jersey alone, there are more than 17,000 franchise locations that provide more than 170,500 jobs and a gross domestic product of nearly $12 billion.

“New Jersey is going to become even more business friendly,” Portesy said. “We have densely populated markets here in small concentrated areas, with a lot of progressive mayors acting on business owners’ behalf regardless of their party affiliations.

“New Jersey also is a very ethnically diverse state. So, for example, if you think about it from the perspective of food, that results in a lot of different kinds of opportunities within that particular industry segment.”

“New Jersey is the picture-perfect state right now for expansion, despite high real estate costs,” he said. “You can’t get a haircut or a massage online and you certainly can’t leave your pet there.

“I think developers are and should be courting more and more franchise systems, which in turn, are now getting prime locations as other brick and mortar companies leave or go out of business.”

Lastly, Portesy said franchises range from $10,000 to a few million dollars in startup costs — but most of it can be made financeable.

“Franchising is the way to go into business for yourself, but not by yourself,” he said. “It tends to avoid many of the issues that stop people from becoming entrepreneurs, such as the fear of the unknown.

“You’re going to get a proven system with support and training, and there is almost always a franchise available in every industry.”

Admission to the 28th International Franchise Expo, which runs from May 31 through June 2 at the Javits Center in Manhattan, is $10 in advance and $20 at the door.

Or, with promo code ROINJ, admission can be free.

To learn more about the event’s educational workshops, seminars, and exhibitors, register at www.IFEinfo.com.

One step closer: Monopile manufacturing facility in Paulsboro has groundbreaking