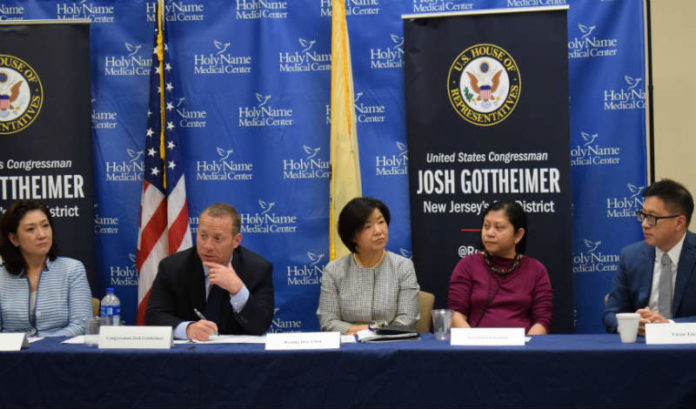 Breaking down communications barriers with the close-knit Asian communities is no easy feat, but first-term U.S. Rep. Josh Gottheimer is attempting to do just that.

It shouldn’t be a surprise, as 11 percent of his district is comprised of that demographic. But the venue Wednesday for his first roundtable with the Asian community was particularly significant.

Holy Name Medical Center in Teaneck has made a name for itself over the past 10 years, and been recognized by peers nationally, for a culturally sensitive approach to health care for Asians.

That effort, led by its vice president of Asian services, Kyung Hee Choi, has created a strong bond in those communities.

What began as an effort to make Korean patients comfortable, such as providing a traditional seaweed soup after birth for new mothers, has rapidly grown in the past two years to include Japanese, Filipino and Indian services as well.

But it has become much more.

After 10 years, Holy Name CEO Michael Maron said, the organization has broken through many barriers of communication and engagement.

“It takes a lot to penetrate that as an outsider,” Maron said. “Ten years of building that, we’ve knocked down many, but not all, of those barriers, and we have as good as good as any relationship — as Caucasians — that you could possibly have.”

Choi said she knows the organization’s brand is strong within the Asian community because whenever the hospital holds an event, the community shows up.

The focus has typically been health awareness and education efforts, but Wednesday may mark a new chapter in engagement: The topic was political involvement.

“By Josh asking for (a roundtable) to be held here, it knocks down a little bit of that barrier,” Maron said. “If he had had it at a neutral site, he would have had a limited number of business leaders.”

“That’s because we have gained the trust of our community leaders,” she said. “We can become a conduit for many other things.”

The roundtable Wednesday included municipal officials from around the region, plus three who made the trip up from Gloucester County.

Two central themes emerged from the comments: Red tape for small businesses is a big issue for the Asian community, which is comprised of a significant number of entrepreneurs, and greater political involvement from the community is still needed.

To the latter point, Ludi Hughes, the CEO of Hughes International Consulting in Fair Lawn who has been politically involved for years, said the community needs to stop trying to maintain its independent cultural identities.

“We cannot do that anymore,” she said. “We have to be Asian-Americans.

“Politicians look at you (thinking), ‘How many votes will I get?'” she said. “If we say we are Asian-Americans, it is better for us and we will have a lot of weight in the political world.”

Gottheimer (D-5th Dist.) was praised by attendees for engaging in a way his predecessor, Scott Garrett, did not, and for his willingness to open the door for greater communication down the road.

“They all vote, they are in Gottheimer’s district, and, to me, it’s a smart play,” he said. “You don’t want to disenfranchise the community. It’s almost like having a caucus. They will vote in a bloc for the most part.”

Gottheimer felt the roundtable was a success.

“I think the No. 1 issue for the community — and, by the way, it’s not one community, and it’s 11 percent of our district — is how do people know we’re available,” he said.

Gottheimer applauded Holy Name’s efforts and success in building a relationship and trust with Asians.

“I think (it’s) exactly what we need to be doing,” he said. “But I want to make sure I knock down any barriers, so people feel they can come and address any issues.”

What’s in a number? Those in hospitals, on ventilators holding steady