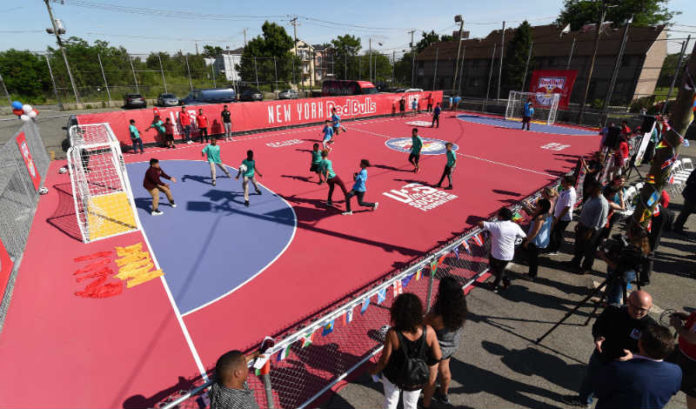 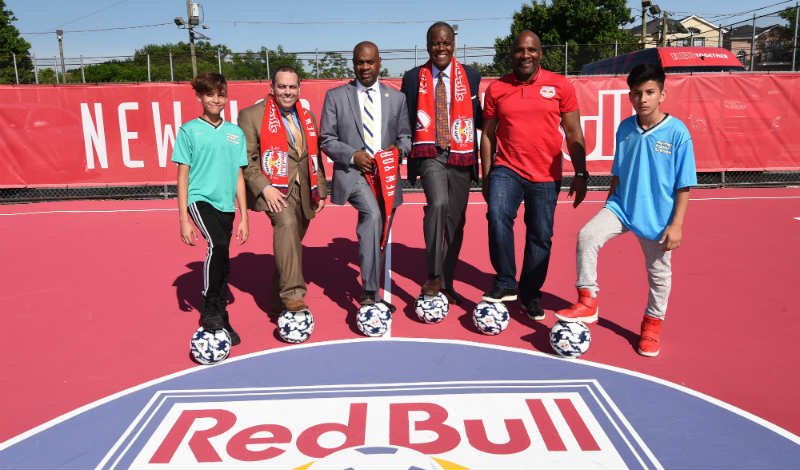 The grand opening of a mini soccer pitch at Rafael Hernandez Elementary School reminded Connor Lade about being in a kid’s shoes again, searching for a place to play.

“You’re always looking for fields to play (soccer) on, and sometimes they’re few and far between,” the New York Red Bulls defender said.

On Wednesday, the former Morristown High School star joined some teammates, children from the Newark-based elementary school and representatives from Newark Public Schools and the U.S. Soccer Foundation to open the small soccer facility.

The event was part of an initiative to build 20 soccer fields in Newark over the next five years and engage 2,500 children in after-school programming, said Ed Foster-Simeon, CEO and president of the foundation. Nationwide, the foundation aims to open 1,000 mini fields and engage 1 million children by 2026, as a part of the “It’s Everyone’s Game” campaign.

Students will be able to play through the foundation’s “Soccer for Success” program, free after-school programming that teaches more than just soccer skills, Foster-Simeon said.

There are also some economic benefits to the program. Foster-Simeon said the initiative engages coach mentors, who teach students the game and also act as a mentor.

“They receive a small stipend to be available on a regular basis, three days a week (for) 24 weeks during the school year,” he said. “Most of the coaches come right from the community, which is really important.”

The program also will provide a chance to develop leadership skills and improve the community, Foster-Simeon said.

The opportunity came together through collaboration between the Red Bulls, Newark Public Schools and the U.S. Soccer Foundation.

This field marks the 10th in total that the team has been a part of, he said. Some others include fields in Newark’s South Ward, Kearny and East Orange.

Stetson said the initiative helped the team work more in the community.

The initiative was then communicated to Newark Public Schools through a desire to work collaboratively, Leon said.

Together, they first broke ground at George Washington Carver Elementary School in Newark’s South Ward, and plan to open up 20 more fields throughout the city, he said.

Foster-Simeon said the plan in Newark is to build fields in each of the city’s wards, so children in each part of the city are engaged.

“As of right now, access to the program is being afforded to students who attend schools in the city of Newark,” Leon said.

In the future, he said, he could see it being expanded to other members of the city, as well.

Organizers said Newark is the third municipality nationwide to make a commitment to expanding safe, sports-based development programs for its youth. Chicago announced in December that it would build 50 mini fields over five years, and New York recently opened 10 of 50 mini fields.

“We obviously want to put a good product out on the field, but we’re nothing without the support of our community … and, so, to have these types of spaces in our community for our kids to have a safe environment to play in, and to develop and to lead healthy lifestyles is huge for us,” Lade said.