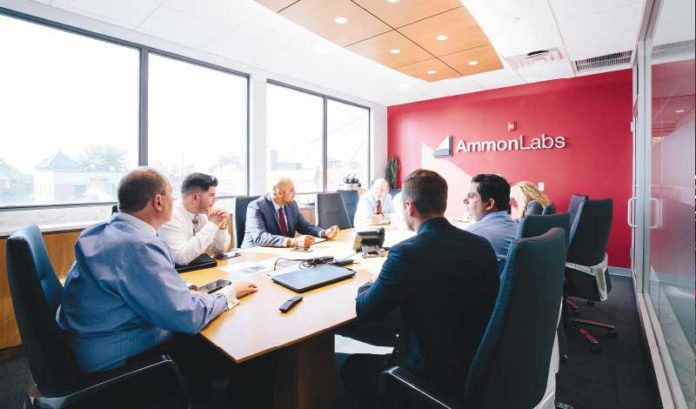 It was the team spirit, Evan Haupt said, that attracted him into the family business.

“Being able to witness my father’s passion for the business and his employees firsthand inspired me to follow in his footsteps,” Haupt, president of Ammon Labs, said.

“Ammon’s commitment to ethical, compliant and reliable testing has allowed the firm to grow into a multimillion-dollar business servicing the needs of addiction treatment professionals and health care providers across the eastern United States,” Haupt said.

It was his father, current CEO Stephen Haupt, who first set out to improve patient outcomes in 1998, Haupt said.

“He started the business in Hillside before we relocated to Linden,” he said.

Haupt said he began working for Ammon Labs at the age of 17 as a courier collecting patient samples during the summer months.

“When I graduated from Quinnipiac University in 2008 with a degree focused on entrepreneurship and small business management, I began taking on various management roles at the company, focusing mostly on sales and marketing at first, before moving into operations,” he said.

Haupt became president in January of this year. His brother, Andrew Haupt, also works at the company, as chief marketing officer.

Ammon Labs continues to offer customized testing and personalized, medicated assisted treatment programs to a range of health care partners and drug and alcohol treatment and behavioral health programs from Georgia to Maine.

“That means we must be vigilant in our monitoring and understanding of the ever-growing list of synthetic and illicit drugs coming onto the market, so that we can stay ahead of what we must be able to test for and detect,” Haupt said.

Since the lab is designed to handle high volumes of specimens — more than 200,000 per month — attracting top talent is of the utmost importance, Haupt added.

“We’ve managed to build an incredible team of lab and toxicology scientists to support our fight against addiction,” he said. “One of the main benefits of being in New Jersey is our proximity to major cities such as New York and Philadelphia, where the tracking of top talent is paramount, and to some great universities here in the state, with most of our technical staff coming from Rutgers University, Seton Hall University and Princeton University.

“We also are putting back into motion our internship programs in the lab and are hoping to bring in some great talent from other nearby universities.”

Ammon Labs’ location is indeed a very good one for a laboratory. So good, Haupt said, that New Jersey does attract other labs that it needs to compete with for talent.

“However, we’ve grown a great reputation over the last 20 years, so it’s probably more of a challenge for our competition,” he added.

That is evident in the company’s fast growth. In the first quarter of 2017, for example, Ammon Labs employed 94. The company currently employs more than 200.

In August, Ammon Labs renovated a nearby three-story, 23,400-square-foot building to serve as corporate headquarters and its new state-of-the-art laboratory.

“Our ongoing commitment to ethical practices and quality requires a methodical approach to growth,” Haupt said. “The complementary financing provided by Provident Bank ($2.56 million) and the New Jersey Economic Development Authority’s (Small Business Fund, $500,000) has enabled us to expand our services in a strategic manner and hire over 50 people in the last six months alone.

“The New Jersey Economic Development Authority’s commitment to fostering sustainable growth has provided us with the opportunity to hire New Jersey residents and support our clients’ needs as they strive to better understand and combat this perilous threat to people across all socio-economic levels.”

The company also plans to expand its services later this year to include genetic testing, enabling Ammon Labs to begin pharmacogenomics, hereditary cancer and genomics testing.

But first on Haupt’s list, he said, is continued construction.

“Our first project is to construct new office space in the first floor of our new building,” he said. “We thought that 14,000 square feet on the second and third floor would suffice; however, we quickly learned that since we are growing so much, we already are running out of space.”

With the creation of nearly 40 additional offices, the company also will be hiring, Haupt said.

It will be a fantastic opportunity for Haupt to provide the mentorship to others that he himself received from his father and his employees since the age of 17.

“I fell in love with what was going on over here at the lab and with the people who worked here,” he said. “Between the hard work and the dedication and loyalty everyone showed my father, it was just one of those things that really inspired me to choose a path to go to school and get the education I needed to successfully run this business one day.”

Ammon Labs created the Ammon Foundation in October 2016 to help remove barriers for those recovering from addiction.

“As the philanthropic arm of Ammon Labs, we provide strategic support for those in addiction recovery seeking to continue their education,” Evan Haupt, president, said. “Our headquarters in Linden provides a place of hope for those who have suffered from addiction, helping them to access, maintain and sustain long-term recovery through two core programs: Ammon Recovery Scholars and our Empowerment Workshop Series.”

Not only has the Ammon Foundation committed to distributing at least $100,000 in academic scholarships this year for recovering addicts hoping to continue their education but also has focused on growing its evidence-based training designed to help provide valuable life skills and career education.

“We are hoping to hold 50 to 100 Empowerment Workshops this year that will attract at least 2,500 people,” Haupt said.

With opioid addiction unfortunately gaining traction in New Jersey, Evan Haupt, president of Ammon Labs, said this has been a busy time for such a division within the toxicology testing industry.

“It is absolutely something that we are here to support for our treatment providers,” he said. “There has been an increased demand for information, including outcome data and drug trend analyses.

“Our data analytics team puts those types of reports together and provides them to treatment providers, as well as to law enforcement and politicians in need of the data.”