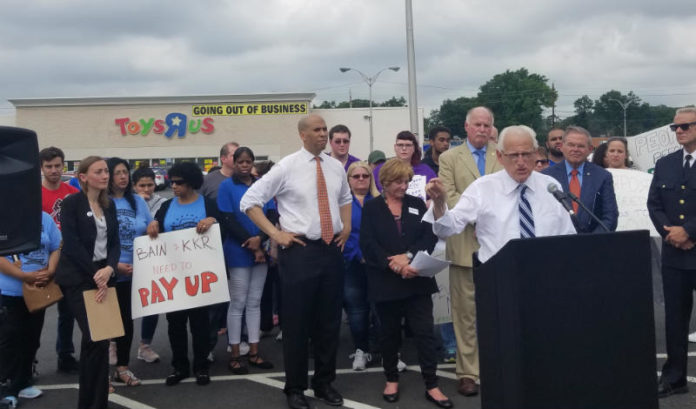 U.S. Sen. Bob Menendez and U.S. Rep. Bill Pascrell, along with U.S. Sen. Cory Booker, announced they are seeking to introduce legislation that would regulate private equity firms like those they blame for the downfall of Wayne-based Toys R Us.

The lawmakers (all D-N.J.) indicated their interest in pursuing legislation could lead to a second wave of financial reform. They spoke outside a Toys R Us in Totowa, where they also called for the three private equity firms that are blamed for the toy company’s closure — Bain Capital, KKR & Co. and Vornado Realty Trust — to provide severance pay for the tens of thousands of employees that are losing their jobs.

“We want to sit down and think about how we look at regulatory elements as well as the tax code at the end of the day,” Menendez said. “There should be elements that they should be stopped in some way from doing this without some consequence and, more importantly, some benefit to the workers.”

Menendez said some elements of banking regulations that came after the 2008 recession could come into play.

But there is no draft yet, and the idea is in preliminary stages.

Some staffers said the plan is in its infancy and calls are still being made to garner support and to determine what the legislation would look like.

“I’ve called on the federal regulators, and called on the senators here today, and they are with me, to ramp up the rules on private equity investors who act in predatory ways to destroy companies like Toys R Us while they turn a profit,” Pascrell said.

He said he will be writing to regulators and the Federal Reserve.

“The so-called ‘retail apocalypse’ can be attributed to Amazon and Walmart, but this is only part of the story. Another part belongs to private equity, whose methods of leveraging immense debt are wreaking havoc on the retail landscape,” Pascrell said.

Booker and Menendez echoed the sentiment, adding that this wasn’t just a story of industry change.

“That is not this story. This is a story of a company, one of the most iconic in America, that was saddled with so much debt, that it could not succeed,” Booker said. “It had so much debt that it couldn’t make investments in operations and technology to adapt and compete. And now the big buys are walking away and the workers … are left with nothing.”

Menendez said Toys R Us was run into the ground by the firms.

“We all know the brick and mortar has a challenge in today’s economy,” he said. “These firms still have the time to do the right thing.”

“The system is rigged,” Booker said.

Genie Solar gets the green light to proceed with 1st company-owned,...