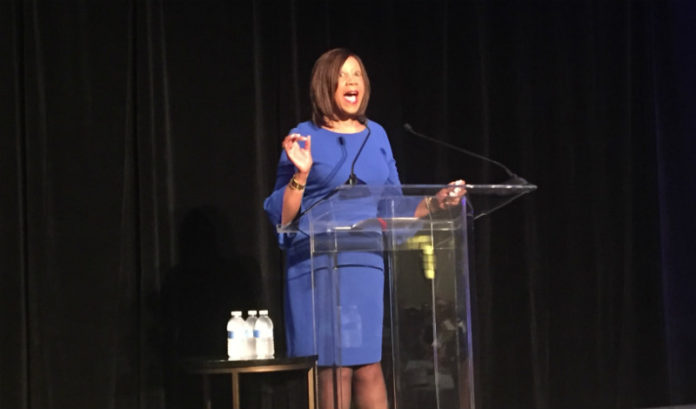 For Lt. Gov. Sheila Oliver, the key to business success is simple: diversity and inclusion.

“If you don’t have diverse voices in the room, I would say, ‘Bad things can happen,’” she said. “When you just have men, or you just have one cultural group or one ethnic group, then you are not getting broad thinking in how to best solve problems.”

Oliver, the morning keynote speaker at the Metro Women’s Leadership Summit on Friday at the Newark Airport Marriott, told a crowd of approximately 400 that diversity and inclusion are becoming a driving force in the state.

“New Jersey is increasingly become the most diverse state in the U.S.,” she said, rattling off anecdotes of Indian, Hispanic and Asian culture around the state.

Oliver said this diversity is increasingly taking a leadership role — especially in many of the state’s life science industries.

“If you go into some of our biggest companies, you will find Asian-American women are running those laboratories, becoming engineers, becoming biochemists and pursuing (STEM) fields.

“The myths are being debunked in terms of what women can do.”

Oliver pointed to numerous studies that showed having a more diverse corporate structure helps the bottom line because it broadens your company’s outreach.

And she encouraged the women in the room to take greater control of their economic future.

“Too often, we have not used or economic power to our best advantage,” she said.

Oliver said doing so will be a struggle — relating one of her favorite quotes.

“Leadership,” she said, “is the only ship that doesn’t return to port in a storm.”

Meeting these challenges is key — and something, Oliver said, others will not expect of women.

“Women often will become discouraged in the business sector as they are trying to get upward mobility,” she said. “It’s a struggle, but you can not get discouraged. You just have to keep pushing.”

And, she told the crowd, when do reach the top, you must reach down below for the next generation.

“We often talk about shattering the glass ceiling. When I hear someone say, ‘Yes, some of us have crashed through the glass ceiling, but there are still a lot of women down in the basement, sweeping up the glass.

“Let us not just think about our issues … let us think about women who are still trying to climb up and reach down and help them.”