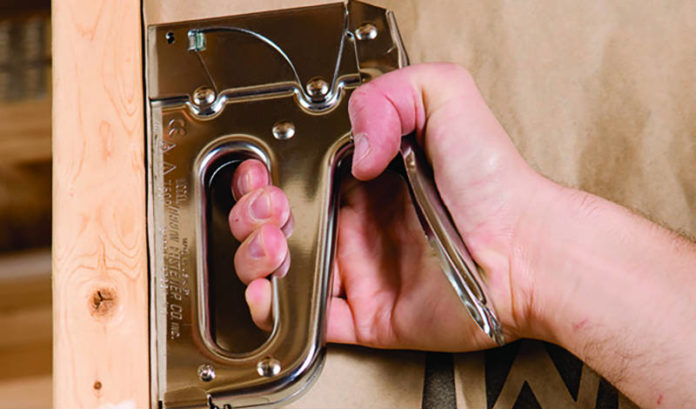 Gary DuBoff is trying to figure out how all this makes sense.

A steel tariff is supposed to help American companies and American workers.

So, why is President Donald Trump’s administration putting tariffs on steel that he can’t buy in the United States? The move could force him to lay off many of his 325 employees.

DuBoff is the CEO of Arrow Fastener. And, if the name doesn’t ring a bell, look at the staple gun you likely have in your garage or work room.

Arrow makes the T50 staple gun. It’s the best-selling staple gun in the country, with more than 60 million sold. It also makes the staples for the T50.

And it makes them all in New Jersey. Has been that way since the company, founded in 1929, moved here in 1966.

DuBoff said Arrow is the last company among its competitors to still manufacture in the U.S. But, here’s the problem: The steel Arrow needs to produce both the guns and the staples is produced in other countries.

DuBoff said the company uses enough banded wire annually that, if you connected it all, it would go to the moon and back.

In March, that wire was slapped with a 25 percent steel tax — a tariff that cost the company approximately $125,000 in April and May.

On Friday, the steel used to make the T50 itself may have been hit, too, when the Commerce Department noted it was no longer giving a waiver to steel produced in Mexico, Canada or the European Union.

DuBoff is still waiting to find out where his domestic vendor gets its steel — and if there is any chance it won’t be impacted.

“We’ve been calling all day to try to find out, but we haven’t been able to get an answer,” he said.

DuBoff has actually been playing a waiting game for some time.

When the banded wire was put under tariff, he filled out the mountains of paperwork needed to apply for an exemption.

“We believe we have a very good case,” he said. “We are not military, we’re not government and we have no suppliers in the U.S. that we can buy from.”

DuBoff said the Commerce Department posted his application on April 28 — and the required 30-day comment period ended without any comments. Now, it’s up to Washington to decide.

“We’re trying to get an answer, we just don’t know when it is coming,” he said. “All I know is I can’t keep paying that tariff forever.”

A second tariff might push the company to the breaking point.

DuBoff said he’s not sure how the company will proceed. He acknowledged more than 250 jobs could be at stake, but he is not sure how it would play out.

“We would hate to close down the facility and find out eight months later that the U.S. and China have made up and the tariffs go away,” he said.

And, he wants to protect his workers, noting their average length of service is 17 years.

“All of these people are going to lose their jobs because (Trump) thinks he’s doing the right thing,” he said.

And here’s the worst part: The company could buy or produce the staples and guns in China and ship them to New Jersey without having to pay a tariff.

That’s what his competitors do.

Arrow, meanwhile, invested more than $3 million into the manufacturing plant in the past three years. An investment that was made to keep the company — and its jobs — in the U.S.

“I know what the intent was, but it hasn’t worked out,” he said. “I don’t know how they don’t see that.”

Why steel tariffs are hurting N.J. company that wants to manufacture...