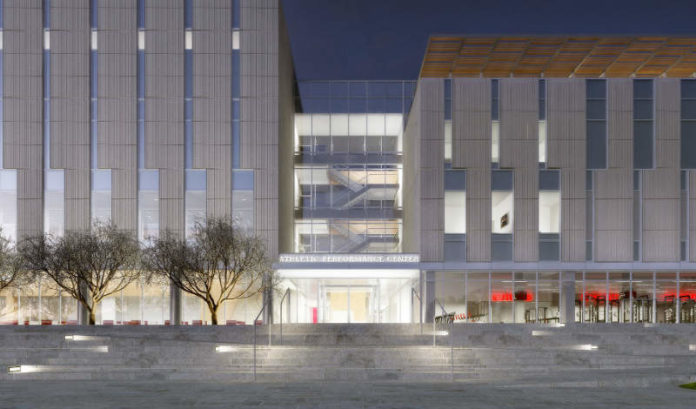 There are moments, Rutgers University President Bob Barchi said, when he realizes just how challenging life in the Big Ten can be.

One of them came last week, when he was at a meeting of the conference’s presidents and athletic directors.

“The one thing that’s really clear, when you’re sitting around the table with 13 other people, is the level of competition,” he said. “This is not bush league. This is the very best competition in the country. We’re talking about, in virtually every sport, (there are) teams that wind up in the Top 5 and the Top 10 in the nation that we’re playing.”

So far, Rutgers has not been able to hold its own in most competitions.

But Barchi, who feels the school is getting closer to being competitive, is taking another big step in that direction, with the RWJBarnabas Health Athletic Performance Center.

The 307,000-square-foot, four-story building, scheduled to be completed in July 2019, will serve as not only state-of-the-art practice facilities for men’s and women’s basketball, wrestling and gymnastics, but create a sports medicine program to serve athletes, students and communities throughout the state.

It also will have a nutrition café, hall of fame lobby and spirit store.

The building, designed by Perkins Eastman and being built by Epic Construction Company, is scheduled to be finished next July.

Barchi, speaking at the topping-off ceremony Monday, said its importance cannot be overstated.

“This is very exciting for me,” he told a crowd of a few hundred. “I love to design diplomas. I love to sign contracts. But, most of all, I love to sign steel.

“This, to me, is one of the signature things that we have been trying to accomplish.”

Barchi said the school owes thanks to a number of people for the project, starting with former state Sen. Ray Lesniak and State Sen. Tom Kean Jr. (R-Westfield), who helped the school get the tax credits it needed to make the project possible.

“It could not have happened without them,” he said.

He thanked the individual donors, who helped raise the money for individuals’ offices or parts of the building, but saved his greatest thanks for RWJBarnabas Health.

“This is a great day for our partnership, which we intend to grow bigger and deeper over the coming months. This is just the first step. But we could not have gotten here without it.”

RWJBarnabas CEO Barry Ostrowksy, a Rutgers graduate, said the partnership made sense. And that its impact will be felt even outside the borders of New Jersey.

“We are a fortunate organization that is pursuing a mission to make the people of New Jersey live happy and healthier lives,” he said. “Rutgers University is an internationally renowned educational institution that has research that, frankly, is felt around the world.

“It was only natural that our two organizations would come together and form the kind of relationships in which we can help not only make life for those within New Jersey better but lives around the country as we become a destination for great health care and great social programs.”

Barchi and Ostrowski stressed how the facility will help both athletics and academics.

“We’re very competitive, as far as I’m concerned,” Barchi said. “The Big Ten is not just sports, it’s academics, and I’m delighted to say, out of our 600-plus athletes, 248 this year were named academic all Big Tens.

“In many of our Olympic sports, we’re already competing in the finals of our sports. We’re there; we’re the competition. We intend to get there in basketball and football as well, but we recognize that we’re competing against the very best, we need to have the best facilities to bring in those student athletes, to make them decide to come here.

“And when they come here, to make them successful and this (RWJBarnabas Health Athletic Performance Center) I think is a great step, especially for our basketball and our wrestling and our gymnastics (programs).”

Rutgers Athletic Director Pat Hobbs said the day is another milestone toward the goal he set out when he arrived on campus 29 months ago.

“When I came here, I said, ‘We’re going to be about championships,’” he said.