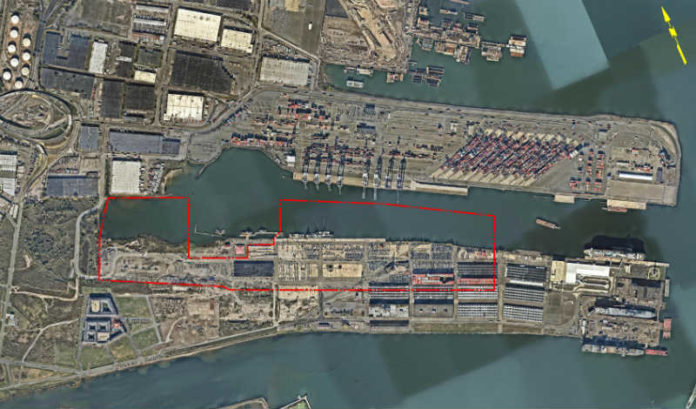 Lincoln Equities Group has closed on its takeover of a 152.9-acre site at Bayonne’s former Military Ocean Terminal, where it will build industrial warehousing, the real estate firm announced Monday.

The deal, first announced in March, will see LEG create 1.6 million square feet of warehouse space at the MOTBY site, which could bring in more than 2,700 jobs through construction and new tenants at the once-deserted site.

Parcels are available for sale or lease, LEG said. Cushman & Wakefield brokered the sale from Ports America Group Inc., and serves as the listing broker.

“Bayonne Logistics Center represents one of the largest port industrial development opportunities in the New York metropolitan region,” C&W’s David Bernhaut said in a prepared statement. “This is a once-in-a-lifetime opportunity to purchase portside land with unparalleled maritime access in one of the world’s most land-constrained port markets.”

The site offers water access to the Hudson River and Newark Bay, as well as land access to the New Jersey Turnpike, among other highways, and the Global Container Terminal.

“As the e-commerce industry and same-day delivery services expand, the demand for industrial warehousing near ports and major metropolitan areas will rise,” Joel Bergstein, LEG’s president, said in a statement. “We see tremendous potential in this underutilized waterfront site and look forward to transforming it into a port-related 21st century warehouse and distribution center.”

Room with a view: Why NRIA is bullish on its Gold...

Kushner completes purchase of ocean block next to Pier Village, will...