Home Health Care Pharma experts: ‘The challenge is to merge the unicorns with the dinosaurs’
Facebook
Twitter
Linkedin 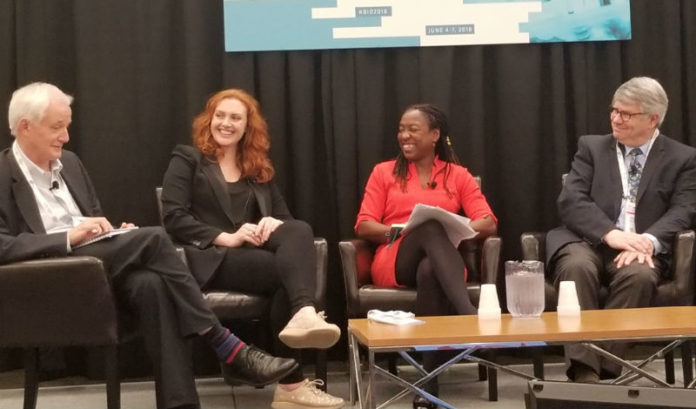 Tech giants Amazon, Apple and Google are not going to immediately disrupt the pharmaceutical industry, which buys the sector time to adjust, but adjust it must.

At least, that’s what some panelists said at the BIO International 2018 conference Monday in Boston.

Munos was on a panel discussing the pricing and innovation model issues in pharma. He said that, while the tech giants have data analytics to their advantage, they lack the skills and institutional knowledge to bring a drug to market.

In fact, Jessica Federer, founder at New York-based Innovayte, said their role may be best suited to a partnership with the trillion-dollar industry.

“Nobody wants to do Big Pharma the way that Big Pharma does it, so they are pretty safe,” she said. “To build up that institutional knowledge and to build up those relationships — that’s not something you would see happen short of 20 years from now. People underestimate how complex global drug development is.”

But that doesn’t erase the fact that there is a cost problem from bloated institutions, in part because scaling up was previously seen as the way to survive in a costly, regulated industry.

That, ironically, has led to less of an appetite for risks.

Meanwhile, every small company wants to partner with Big Pharma. That’s the dream, but they can’t all clear the high hurdle that the big brands have — which the brands need in order to establish quality, Federer said.

“The challenges is to merge the unicorns and the dinosaurs,” she said.

Steve Wooding, head of the global commercial strategy organization at Janssen, the Raritan-based research and development arm of New Brunswick-based Johnson & Johnson, touted the company’s reputation for working with startups and being “agnostic about where the science comes from.”

Munos said the innovation economy has to change — and he said it is changing with a new generation of CEOs.

“The data shows lots of reason to be pessimistic (about the industry), but I am optimistic for lots of reasons,” Munos said. “There are other signs pointing to reversal of trends. There is a new generation of CEOs across the industry that are really good. They are people who are willing to look at the facts as they are and make tough decisions.”

Munos touted Novartis, which has U.S. headquarters in East Hanover, and J&J as being two of few that have some of those leaders, and said the willingness to seek change among the younger generation, compared with the denial of problems in the industry from the older generation, is marking a significant change from the last 30 years.

“The industry has stopped creating value — or, rather, the return on research has slipped below cost of capital, six or seven years ago, and has gotten steadily worse,” Munos said, citing a recent Deloitte study.

“However you look at it, there’s a problem with value creation. There’s a subset of the industry that is creating value, and then there’s another part that is destroying value. That is what is being sorted out as we speak.”

The fact that value creation is an issue is a blessing in disguise for the industry, he said.

“If it weren’t (an issue) there would be less of an urgency, this pressure, to change,” Munos said. “We need to change, or we will disappear. So that is putting enormous pressure on us to adjust.

“Industries do not disappear; there’s always some survivors out here who find out how to tweak the business model and adapt into the new reality — that’s what we are seeing in pharma today.”

“I think there is recognition there needs to be a change,” he said. “The definition of innovation has to change, and the industry will change to follow that.”