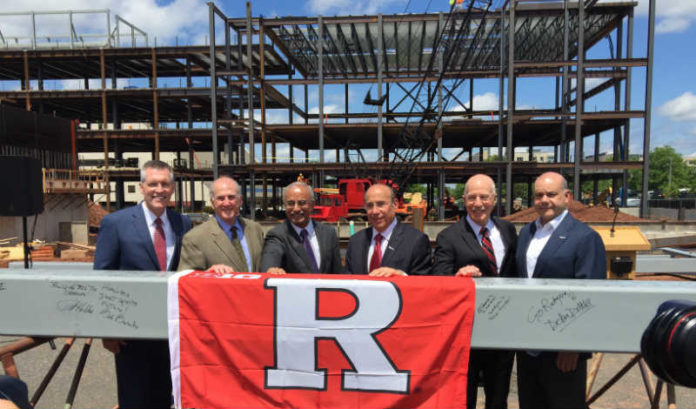 It’s a good line. One that speaks of a new day and new enthusiasm at Rutgers University and for its athletic programs.

Hobbs was speaking after the topping-off ceremony for the RWJBarnabas Health Athletic Performance Center on Monday afternoon at Rutgers in Piscataway.

The 307,000-square-foot, four-story building, scheduled to be completed in July 2019, will serve as not only state-of-the-art practice facilities for men’s and women’s basketball, wrestling and gymnastics, but create a sports medicine program to serve athletes, students and communities throughout the state.

Hobbs and Rutgers President Bob Barchi both called the building just one of the many facilities needed to help Rutgers compete in the rough-and-tumble Big Ten.

And it wouldn’t have happened without an $18 million contribution from RWJBarnabas Health.

Winning — which Rutgers hasn’t been doing a lot of since joining the Big Ten four years ago — takes money, usually in the form of corporate support.

RWJBarnabas Health CEO Barry Ostrowsky said he was happy his organization could lend a hand. He feels what’s good for the state is good for his brand.

And he’s made it his mission to convince other business leaders around the state to the do the same.

“I have been speaking to my colleagues who are CEOs whose core mission isn’t exactly like ours, but frankly, their companies and organizations benefit from the infrastructure of New Jersey,” Ostrowsky told ROI-NJ. “If you have a business in New Jersey and you recruit people from New Jersey in your company, I think you have an obligation to make an investment in the environment and the infrastructure that helps mold these young people who you will attract to your company.

“I think there is a return on investment, and I think that return may be a generation away, but that’s all capital involvement — you don’t get immediate gratification.

“If you lay it out the right way, other CEOs, other leaders of organizations, I think will, in fact, do that. And I’ve been gratified with the response so far.”

Hobbs has been on a mission to raise money since he first arrived on campus 29 months ago. The school, he said, is closing in on its initial goal to raise $100 million for facilities upgrades.

The money that came in from RWJBarnabas Health, he said, has helped the school get close to its goal.

“It’s an enormous seal of approval on what we’re doing and on the vision,” he said. “(RWJBarnabas) has to be very careful with their investments and who they partner with and the fact that they say we’re going to partner with Rutgers athletics tells the other corporate players in the state in New Jersey that something different is happening here at Rutgers.

“I think they are more open to those conversations.”

Other companies and individuals have stepped up.

The Gary and Barbara Rodkin Center for Academic Success will serve the more than 600 student-athletes at the school, as well as provide state-of-the-art locker rooms and training spaces for the men’s and women’s soccer and lacrosse programs.

Hobbs, of course, has a wish list of desires.

“I think we have to start paying attention to the fan experience inside the stadium and inside the arena,” he said. “Those are expensive, but in many ways, generate additional revenues. We’re going to start talking about that. It may begin with some small upgrades within the (Rutgers Athletic Center) itself, to better the fan experience. We obviously have to get Wi-Fi into the football stadium, because that will allow us to do other things. So, we’ll turn our attention over there.

“But, we need a field house as well. There’s no end to the list. Our golf programs need a training complex. There’s a lot to do a lot to keep me busy in the years ahead.”

It all starts with corporate support.

Ostrowsky said he’s thrilled RWJBarnabas Health can do its share.

And while the payoff may come down the road on the field, Ostrowsky said he’s already seen the difference it is making today.

“The greatest reinforcement is when you meet the young athletes and when you meet the new students in the medical schools,” he said. “You couldn’t be more impressed and less anxious about the future. And these things don’t happen spontaneously.