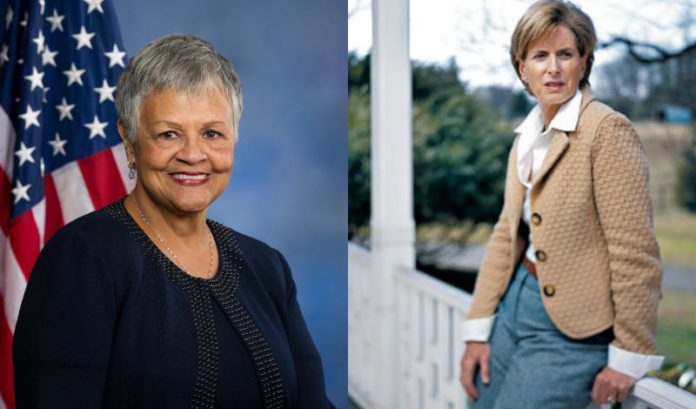 U.S. Rep. Bonnie Watson Coleman and former Gov. Christie Whitman said they are thrilled a record number of women are running for office.

They are just hoping it will bring some much-needed change.

The two shared their thoughts at the Metro Women’s Leadership Summit, held recently at the Newark Liberty International Airport Marriott.

“One of the most wonderfully ironic things is that (President) Donald Trump has really gotten women going,” Whitman said. “It’s like they’ve suddenly woken up.

“Women are now running for office based on a variety of different issues, including the attacks on women’s rights, on immigration, on gun laws and, while we are not all in the same place — and we shouldn’t be — that is the beauty of it all. I do think there will be seat changes, because women tend to get involved in politics when there are issues they want and need to be solved.”

Watson Coleman (D-12th Dist.) said she does not believe that women, as much as men, are motivated to enter politics for the titles or power.

“We want to contribute to and provide the focus needed from our perspectives as women, as mothers and as members of our communities at different levels than men are,” she said. “But we need lots more women, I think, who are fundamentally grounded in their principles, who want to make things better by doing things differently, to be actively engaged and say, ‘I never wanted to be an elected official, but I will now stand up for my community,’ from the school board all the way up to the president of the United States.”

In addition to greater diversity, Whitman said, an additional benefit to electing more women to office is that she believes they tend to reach across the aisle more often.

“One of the few places I disagree with Millicent Fenwick is when she said that women who have been in power as long as men will act just like them — I just don’t think so,” she said. “We need people who will put their communities, their state and their country ahead of their politics.

“I mean, you get elected with a party label that will tell people how you might approach issues in general, but, then, you represent and must work for everyone in your district — not just the ones who voted for you.”

Watson Coleman said she often has been disheartened by the inaction of her Republican women colleagues in Congress.

“I am concerned with how this administration will go to women’s issues so quickly, and yet they remain silent and don’t quite push back like they need to,” she said. “There are critical issues on the table right now, such as our rights to make decisions about our own bodies and our access to health care, and even though I thought we had solved that issue, we are somehow revisiting it now, along with others in that same vein of civil rights.

“I would want to see more expression from women in Congress right now, and I just haven’t seen it.”

She began her political career as an elected freeholder in Somerset County in 1982 before being appointed chair of the Board of Public Utilities in Gov. Thomas Kean’s administration.

Times, she said, have certainly changed.

Whitman, however, did acknowledge there’s one time when gender can influence a vote.

“If a person today is equally comfortable with where two candidates are, and one is a woman or a minority, I think it is OK to let that be the deciding factor, because we absolutely need more variety at the decision-making table,” she said. “Our problems today are so deep and so complex that there is no one group who has all the answers.

“Not that the world would be perfect if it were run by women — I’m not sure we could screw it up any more than the men have — but it might be a whole lot better right now if we had better balance.”