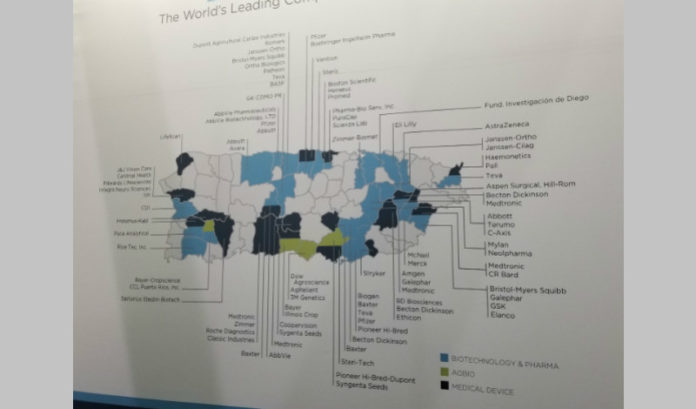 Everyone knows the residents of Puerto Rico and their businesses are still recovering from devastating impact of Hurricane Maria.

But the leaders of the island’s life sciences sector showed up en masse at the 2018 BIO International Convention this week to make sure everyone knows their industry is back in full swing.

“You see all these people here? I just called them up and said the government is not paying for this — for the first time, they said they could not — all these private companies put in the money to be here,” Ivan Lugo Montes, executive director of the nonprofit Industry University Research Center, or INDUNIV, said.

The island’s governor, Ricardo Rosselló, made an appearance Tuesday for a panel highlighting a joint report from the Biotechnology Innovation Organization and TEConomy Partners on the bio and life science sectors, and the delegation that manned the booth on the exhibition floor remained for the week.

Montes said the manufacturing of pharmaceuticals — which makes up a significant portion of the island’s economy — halted for about two weeks after the Category 4 hurricane hit on Sept. 20. Since then, Montes said, things have gone back to normal.

The biggest problem for Montes has been getting the word out about the sector’s recovery. Reports about the slow recovery in rural areas have been hampering the market, he said.

“There were companies that, yes, had leaks in their ceiling and different types of things, but they were corrected, and they were taken care of,” Montes said. “All the negative publicity came out … that Puerto Rico might be running out of materials and stock that affects the nation — because we supply 50 percent of the world’s drugs — was all negative publicity.”

Despite power outages for months at a time in the areas where many of the life sciences companies are, most had generators to keep production moving along within a couple of weeks.

But there is one real problem facing the industry: the loss of its much-touted human capital.

As one of its selling points, the island boasts a highly educated and hard-working workforce for the industry.

But there has been a slow decrease in that number, which was further aggravated by the hurricane.

“We have lost people, but let me tell you how Puerto Rico works — we are a revolving door,” Montes said. “Fifteen years ago, there were 3.9 million people, now there are 2.4 (million). They are predicting it is going to be around 2 million (after the hurricane).”

And the issue of the economy and the government debt doesn’t impact the industry, Montes said.

It’s the same line of questioning New Jersey is currently going through. But Puerto Rico has found opportunity in disaster, Montes said.

“We are in the right direction,” he said. “What we need is to send a clear message out. That’s why we continue to be here for 14 years. But we need to send a message that Puerto Rico is stronger than ever.”

For 50 years, Puerto Rico has played a key role in the supply chain of the bio industry.

“Puerto Rico exports to 80 countries around the world,” Montes said. “All plants are FDA-approved and have registration in 80 countries. More than 50 percent of the blockbusters consumed in the States are produced in Puerto Rico — although the label says New Jersey.”

This has helped build a supporting industry that includes lawyers well-versed in regulation and tax laws around the world, as well as financial and research institutions that partner or work with the companies, he said.

“We have an infrastructure that is billions of dollars,” Montes said. “Just Amgen, by itself, is about $3 billion (invested) in Puerto Rico, with more than 2,500 employees. Every executive in Amgen has gone through Puerto Rico.”

Which is why the delegation invested in itself to fly out to Boston for a convention that draws attendees from nearly every state in the U.S. and 79 countries around the world.

“All the ecosystem of Puerto Rico is here, because more than 50 percent of our industry and 33 percent of our GDP depends on the pharmaceuticals,” he said.

Which is why the FDA announcing a potential shortage of materials, and all the renewed reports about the debt the government is in, are hurting business for the island, he said.

“Companies like Amgen, during the hurricane, they never stopped producing,” he said. “Most of the companies in 11 days were back and running.”

Read more from ROI-NJ on the BIO International Convention:

electroCore announces its CEO is stepping down