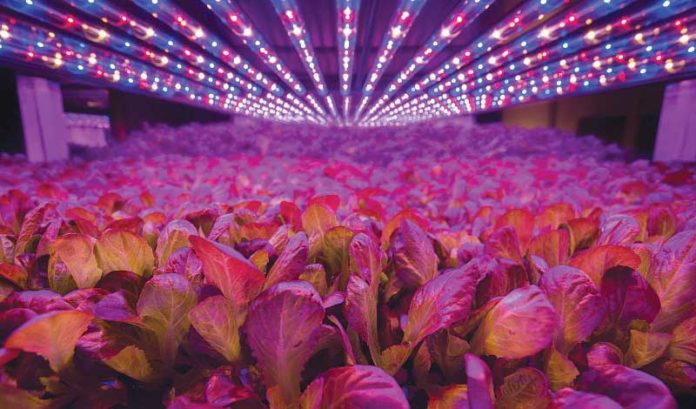 AeroFarms received notoriety around the state and the country in 2015, when it opened up the largest indoor vertical farming company in the world in Newark.

Since then, the ability to produce nearly 2 million pounds of leafy greens annually in its 70,000-square-foot “farm” in the Ironbound section of the city has drawn worldwide attention from wellness and nutrition officials, who are looking for a next-generation way to solve global nutrition issues.

So, what’s next? Plenty. And, although AeroFarms may be setting its sights further than Newark, it’s all still happening in the Garden State.

First up is the $1 million Seeding Solutions grant AeroFarms received from the Foundation for Food and Agriculture Research to work with universities, including Rutgers University in New Brunswick, on research that would improve crop production and plant nutrition worldwide.

Then there is the planned opening of AeroFarms’ 10th indoor farm, expected to be one of the largest in the nation, in Camden.

“This is an incredibly important project and initiative for us, and we are especially proud to be partnering with the New Jersey Economic Development Authority in creating new jobs and opportunities in the state of New Jersey, as well as addressing the issue of food deserts,” Marc Oshima, co-founder and chief marketing officer of AeroFarms, said.

“Furthermore, AeroFarms’ initiatives with the Foundation for Food and Agriculture Research, Rutgers University and Cornell University are giving us the world-class ability to understand and optimize plants better than anyone, so we can draw upon those lessons to help the broader industry outside of indoor vertical farming.”

It’s all part of the mission and growth statement co-founder and CEO David Rosenberg established from the beginning.

“Our mission is to build farms in cities all over the world so that everyone has access to fresh, safe, great tasting food, 365 days per year,” Rosenberg said.

That is no easy task — especially for a company dedicated to doing more with less.

The $1 million Seeding Solutions project, according to AeroFarms, aims to improve crop production and plant nutrition by exploring relationships between optimized plants, the phytochemicals they produce, and the taste and texture of the specialty crops grown.

The Foundation for Food and Agriculture Research, a nonprofit organization established under the 2014 Farm Bill in Washington, D.C., hopes the research conducted in conjunction with Rutgers and Cornell will result in improved commercial production of leafy green varieties overall.

“New Jersey is the Garden State,” Rosenberg said. “We are open-minded to partnering with others in the farming industry to learn and share best practices and technical explorations.”

“The resulting research will provide us with opportunities to identify new plants we have not yet grown,” he said. “It also will set the stage for future collaborations with universities regarding educational curricula and work opportunities as a nice way to build a pipeline of future farm leaders.”

As Oshima put it, AeroFarms is in its “second round” of what he expects will be “a nine-round game,” referring to the timeline of the project.

That’s about where AeroFarms is with Camden, too.

Last year, the EDA awarded AeroFarms $11.14 million in tax incentives over 10 years to build one of the nation’s largest indoor farms in Camden, according to the agency.

The company has three years to act on the Grow New Jersey Assistance Program Grant, which encourages businesses to locate or relocate in distressed municipalities and make capital improvements to the properties they occupy.

In this way, Rosenberg said, AeroFarms plans to expand both domestically and internationally by building farms on major distribution routes and near population centers, with farms currently in development in multiple U.S. states and on four continents.

Starting with the anticipated 78,000-square-foot farm in Camden, Oshima said.

“We see the opportunity to extend the work that we are doing here to that community in order to have a similar impact,” he said. “Just like we have in Newark, we expect to keep creating jobs and better access to healthier, local foods.”

The two initiatives are new — but they fall in line with the vision Rosenberg and Oshima set forth when they founded the company in 2004 in Ithaca, New York.

When Rosenberg, then the founder of a clean nanotechnology company; Oshima, then a marketer with companies such as Toys R Us and L’Oreal; and Ed Harwood, then an agricultural professor at Cornell University, set out to build AeroFarms in 2004, Rosenberg said they asked themselves just one question.

“We asked what our vision, our values and our principles were,” he said. “How did they interact with our desire to do good for the environment and society while maintaining profitability for our shareholders?”

There were, after all, numerous pressing issues to address.

That challenge is made even more difficult by the fact that Earth is dying, Lisa Newman, chief operating officer at AeroFarms, said.

“Over the last 40 years, Earth has lost nearly a third of its arable land primarily due to soil erosion and pollution through pesticides,” she said. “Soil erosion is now occurring 100 times faster than it can form.”

It is a problem we caused, she added.

Furthermore, humanity’s overuse of pesticides has decreased beneficial microorganisms in the soil and has allowed bad ones to thrive, leading to toxic runoff, algal blooms and oceanic dead zones.

“Meanwhile, more than 75 percent of our greens are lost before they even hit our kitchen tables,” Newman said. “Nearly 50 percent already is lost at the field; nearly 10 percent can’t survive the cross-country road trip from California and Arizona; nearly 15 percent is lost at the store; and then, when we are able to get it in our fridge, more than 40 percent of consumers throw out what they cannot eat in time.”

So, Rosenberg, Oshima and Harwood decided to create a technology- and data-driven farming company that not only would address the macro-tensions within agriculture but also would grow fresh, safe and nutritious food indoors using an aeroponic system that integrates biology, mechanics, operations, construction and more.

“We looked at what it took to grow plants outside and replicated it inside while bringing costs down to be comparable with the field,” Rosenberg said.

Creating the ability to grow nearly 400 varieties of leafy greens and herbs without sunlight or soil in completely controlled indoor environments was and continues to be a massive undertaking that requires expertise and partnerships with multiple industries, Rosenberg added.

“As the world leader in this space, we are the first to see problems and the first to have to solve them,” Rosenberg said. “Therefore, we must hire in house and partner with various skillsets.

“For example, our meaningful partnership with Dell now allows us to develop how our data is managed, where it is stored and how it is utilized, whether immediately by food safety and operations, in an hour by sales and marketing, or in a day by finance,” Rosenberg said.

AeroFarm’s fully-connected farms, complete with more than 130,000 data points that monitor and help create specific light, water and air recipes for each plant, also give the company the ability to automate everything from seeding, harvesting and packing to controlling environmental factors such as humidity and temperature.

The use of LED lights also gives the greens exactly the spectrum, intensity and frequency they need for perfect photosynthesis, Newman said, resulting in better color, flavor, texture, size, shape and nutrition.

“Since plants cannot run from their environment, they must adapt,” she said. “Therefore, we can optimize and enrich the environment to obtain the right nutrients and flavors of each plant.”

The plants are grown atop a reusable cloth medium developed from post-consumer recycled plastic, such as 350 discarded water bottles, and treated via a closed-loop water circulation system.

“This allows the roots to grow down and suspend in air as the patented aeroponic growing system mists nutrition into their structure,” Newman said.

In this way, Rosenberg said, the plants’ roots receive oxygen while the leaves receive carbon dioxide, resulting in healthier oxygenation throughout the plant.

It also means that AeroFarms has zero need for pesticides, fungicides or herbicides, he added.

“Nearly 80 percent of people, when asked why they buy organic, will say that they don’t want chemicals used on their food,” Rosenberg said. “But what they don’t realize is that organic food, especially leafy greens, still can use organic pesticides.

“Why is it that when the label says that it has been triple-washed, we don’t stop to think about why that is needed?”

Dream Greens, AeroFarms’ retail brand, are ready to eat without washing and are currently sold into the food service industry and consumers at ShopRite, FreshDirect, Whole Foods and Seabra Foods in New Jersey and New York for nearly $3.99 each.

The nutritional benefits, as well as the environmental and economic benefits in the communities in which AeroFarms works and sells, are exactly what attracted attention — and dollars — from the Foundation for Food and Agriculture Research and the EDA.

Oshima said this research represents the biggest potential for the company do the greatest good.

“The program was formally announced last fall and kicked off at the end of last year,” he said. “We are, I would say, in the second round of a nine-round game when it comes to that program.

“We plan to publish and make accessible our research so that agriculture can improve overall.”