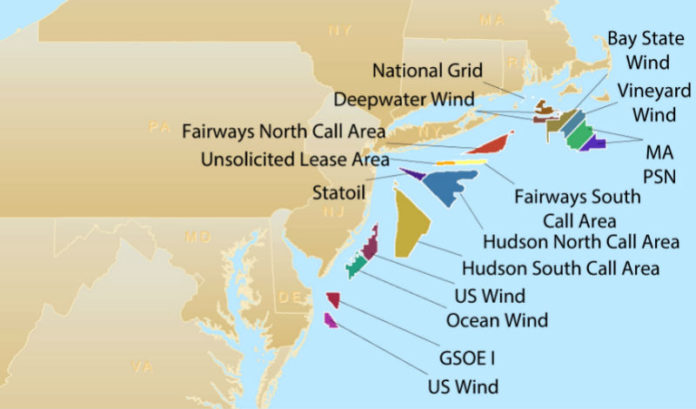 New Jersey is “right in the middle” of a new industry starting up in the U.S.: offshore wind.

As projects range from Massachusetts down the East Coast to North Carolina, New Jersey is among the players, even if it isn’t the leader of the pack, according to Jim Bennett, the chief of the Office of Renewable Energy Programs in the Bureau of Ocean Energy Management in the U.S. Department of the Interior.

Bennett spoke to a crowd at the annual US Offshore Wind 2018 conference and exhibition, organized by New Energy Update and held in Boston last week.

“We’re at the place we are at now because we’ve got, in addition to the fundamental elements that will make things work, we have the federal government working with the state governments working with localities working with industry in a way that is very constructive. In times past, we weren’t always able to mesh as well as we are now; that is making a very difference,” Bennett told ROI-NJ after the event.

New Jersey is among the group taking advantage of the good winds and shallow ocean shelf off the East Coast — but is doing so at the tail end of the “first eight-to-10-year process,” which began in 2009.

Now, as prices are dropping and the industry is advancing — with the help of private interest and from Europe’s pioneering efforts — the next 10 years should see a steady stream of projects more reliant on renewables, Bennett said.

And, unlike the increase in solar energy competition from sunnier states around the country that New Jersey faces, the Mid-Atlantic and Northeast region that has bought in can take the lead on the market in a way that the Gulf of Mexico and the West Coast cannot.

“The reality of the situation is that the Northeast has the trifecta, it all comes together,” Bennett said.

That is the shallow ocean shelf, good winds and a good market for selling energy.

The West Coast has a steep shelf, which means it has to wait until floating turbines are more efficient, and the Gulf of Mexico doesn’t have the good winds, even though it has the same shelf, Bennett said.

“It’s going to take time, but it’s taken the last eight to 10 years to get to the point where we’re about to put steel in the water,” Bennett said.

The first turbine in federal waters is slated for 2020, and New Jersey is likely to have its first in 2026.

“New Jersey is a state that, under the current administration, has expressed a strong desire to participate,” Bennett said.

But where the state stands in line for its commitment doesn’t reflect its importance as much as seeing how successful the market becomes.

“This is where a lot of substantial investment of time and energy on everybody’s part (is needed) to get a new industry off the ground,” Bennett said.

Checkpoint opens Customer Experience Center as it marks 50 years in...