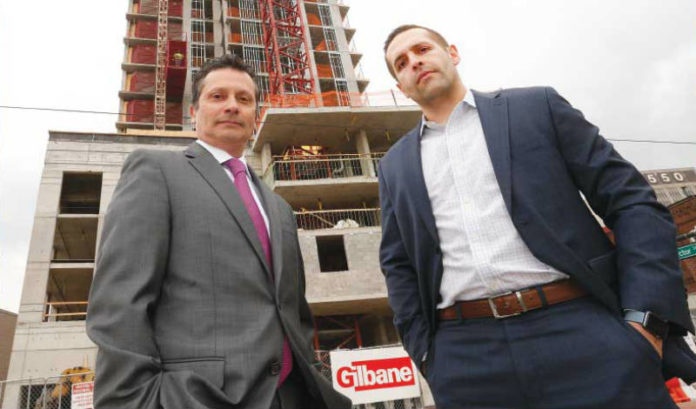 The topping-off ceremony earlier this spring for One Rector Street, the 21-story mixed-use facility in Newark, drew all the familiar faces, including Gov. Phil Murphy and Newark Mayor Ras Baraka. It even drew a special guest, Shaquille O’Neal — and investment partner Boraie Development.

The Boraie building is known as “Shaq Tower,” the first luxury high-rise in the city in 50 years. But two leaders at Gilbane Building Co., who were standing at the back of the event, are hoping it also will be known as something else: The job that helped propel the New Jersey office of the international firm into the residential market.

For Daniel Shea and Chris Cornick, the project is just the latest example of how Gilbane’s New Jersey office is diversifying its portfolio of activity in an effort to better handle fluctuations in the construction industry.

“Our plan was to go into additional types of markets and expand our portfolio to be able to ride out any kind of fluctuation,” Cornick, the director of business development, said. “We have moved into some of the corporate fit-out work, continue to do some of the design-build process work, have a couple of opportunities on the industrial side as it relates to manufacturing and warehousing, and we’ve moved into residential.”

Shea, the business unit leader for New Jersey, emphasized that, while the work may be new for Gilbane in New Jersey, it’s not new to the company and many of the people who work there.

“I’ve had experience on 40-story buildings in my lifetime and we have a project executive who has, as well,” Shea said. “Gilbane in New Jersey had never done anything of that size, but our talented people have, and it was just about having that first developer give us the opportunity.”

Despite the size, Cornick said the company maintains its family-owned and -managed feel.

“I think that’s important,” he said. “People can still access Gilbane family members very easily. I think that’s a differentiator for when you get to projects of massive scale. They can get in touch with ownership within an hour or within a day.”

ROI-NJ recently caught up with Shea and Cornick to get their thoughts on where Gilbane is in New Jersey — and where they hope to take the company moving forward.

ROI-NJ: Talk about diversifying: How is that going?

Daniel Shea: We’ve tried to stay on the plan that we laid out in 2015. We are maintaining our presence in our core strengths, which are health care, higher ed and public agency work. Since then, we’ve formed separate groups that focus on other sectors, such as interior corporate fit-outs. We’re working with a lot of the Fortune 500 companies. They are either signing new leases and doing renovations or they are re-upping their leases and either doing re-stacks or consolidating their footprints.

We just completed a large fit-out for PwC in Florham Park. We did Securitas’ new headquarters in Parsippany and one with Bank of America.

ROI: Forgive us, but Florham Park and Parsippany are not exactly the hipster towns on rail lines that all businesses seem to crave. Is this a trend?

Chris Cornick: There is a hesitation for some people to invest in the suburbs, but we’ve done as much corporate interior work in Jersey City as we’ve done in Florham Park and Parsippany. I tend to be hesitant to say everybody wants to move into the city. There are some significant office leases and significant development going on in the suburbs.

ROI: Why are you seeing an increase in this need?

CC: There’s a couple of reasons. Clients are able to consolidate square footage because of the new design trends, plus you have fewer people coming to work every day. And then there are amenities. Whether it’s upgrading the lobby or putting in a new kitchen for better food options, companies are finding their current spaces don’t fit their current needs, and this is a way to change that.

ROI: Give us some sectors where you’re increasing your presence?

DS: Life sciences has always been strong. So, we hired Anthony Giuliano as a senior project executive. He is going to lead us into that market in a big way. That’s our next big step.

You have your Class A Fortune 100 companies here, but there’s also a whole second-tier pharma market. It’s something we’ve done really well historically as a company, but we needed that local individual to lead the team. That’s why we brought Anthony on board and we’re starting to see some opportunities flow in. I think when you look at life science and manufacturing, those industries may overlap and intertwine. I think they can be poised for some big growth in 2018 and ’19.

And retail is getting big. We haven’t started yet, but we have two contracts at American Dream (Saks Fifth Avenue and Lord & Taylor), we’re looking at a third one now and are expecting a fourth one soon.

ROI: Does that mean you are going away from your core work?

CC: Not at all. We’re still very active. From higher ed to health care, I think you’re still in a little bit of an arms race. One is competing for patients while the other is competing for students. So, while some of the large higher-ed projects may have happened in the last couple years, I think you’ve still got an influx in student housing that has to happen either through the universities or off campus. We’re doing an off-campus student housing development in New Brunswick.

And we’re seeing a lot of pushes, whether they are new buildings or transformations of existing buildings, into STEM-focused opportunities — that’s certainly a market that each of the colleges is going to push for, and we’ll certainly try to be at the forefront of that.

ROI: Talk about branching out: Is it just to protect yourself in case of another economic downturn?

DS: We happen to have the talent pool of staff that have experience in some markets, and it just made sense to find a couple of key individuals to lead us into a particular market. In the case of life sciences, we had some talented project managers and superintendents, we just need a leader to focus on sales and management of it. We have some talented people who have high-density residential and student-housing experience. It just happened one of our senior project executives has as well and now we have some student housing work.

It’s a combination of, ‘Yes, we needed to diversify to ride out any market fluctuations,’ but we also have the talent, so let’s add a couple of key positions and we can increase our markets.

Thoughts on the state economy and where it might be headed

Daniel Shea: Building and developing in this state is expensive and challenging. If you look at Gilbane geographically across the country, we’re metro-centric. Most of our offices have a big city associated with them. We’re jammed between New York City and Philadelphia, dealing with how many municipalities, and they all have their own planning boards and zoning boards and that becomes a challenge.

More specifically, you still have the residuals of a very robust residential midrise and high-rise work. You’re still seeing some of those towers being built. That’s still a huge driver in this market now. It could be as much as 15-20 percent of the overall construction market in the state.

Chris Cornick: Anybody who is a proud New Jerseyan doesn’t want to say that New York helps our economy. We want to say we’re doing it on our own here and we all have our great things to offer, but the carryover effect is tremendous. The residential market is a huge carryover because it’s so much cheaper to live here and then commute to New York City. You’re seeing corporate offices move executives as well as back office support to New Jersey. You’re seeing companies put their manufacturing here because their corporate offices are in the city. That helps drive our economy as well.

I think, industrywide, we’ll continue to see a trend of science and technology driving the front here, and that spans from the higher education markets to some of the K-12 markets all the way to what types of corporations want to build their offices and their manufacturing and their laboratory facilities here.

Everyone has been following what has been happening with Amazon, and part of that big pitch is the amount of educated people and the level in which they are educated and the expertise that they bring. You see that span into life science companies and health care organizations, into corporate America, into higher ed. That is what I think drives our growth here.

Bridgewater Medical Building sold by one joint venture to another