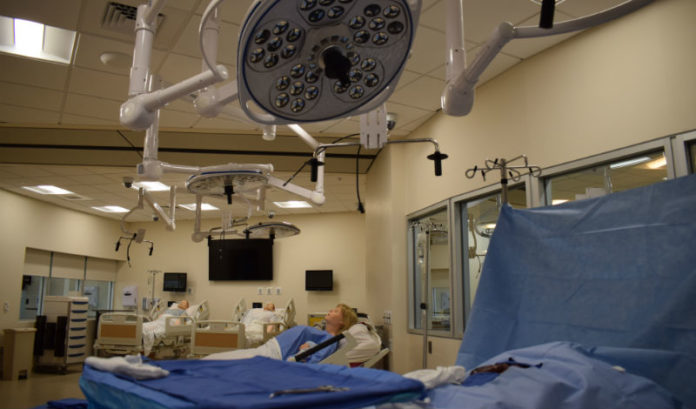 Jersey Shore University Medical Center’s HOPE Tower plans to open its doors to patients next week — pending final approval from the state Department of Health — signaling the culmination of what will be a $256 million, more-than-three-year project.

The hospital, part of Hackensack Meridian Health’s network, celebrated the tower’s opening Wednesday evening with a VIP event and tours of the 10-story building in Neptune.

At a time when consolidation is key for the industry, hospital President Dr. Kenneth Sable said the tower represents a consolidation of sorts within the health system.

In addition, the building represents a one-stop shop for all the outpatient services the hospital can group together there.

That includes moving things like imaging and pre-admission testing out of the hospital and into the tower.

Hospitals have increasingly come under fire for their higher prices — in comparison with imaging centers and other outpatient centers.

“We are evaluating our pricing policies across our network, because we need to be competitive. We have also done joint ventures,” Sable said. “We are absolutely looking at costs and ways to become more competitive in the marketplace — understanding that patients have choices.”

The hospital is opening the new tower after the industry has spent the last two years talking about the importance of having a presence outside the walls of a hospital, sprinkled around a community, and creating more points of access to the health care system.

Sable said this still accomplishes that.

“It will allow us to provide more coordinated care. It’s disjointed when we have decentralized care everywhere. Whereas, here, if you are here and you need a behavioral health consult, they are in the building,” he said. “Everything is about aligning and coordinating care.”

Which is the model that hospitals have long employed. But, because it’s an outpatient setting, the reimbursement the hospital will get for services in the brand new tower will be less.

“If we wanted to maximize reimbursement, we would have made the entire building hospital-based, but we didn’t because the patients are now more consumers, the patients are on high-deductible plans, they are the ones that are going to be getting the bill, and we just felt the way the world was moving, that wasn’t the goal. The goal was to promote coordinated care and keep the cost down as much as we can,” Sable said.

It also allows for the hospital to expand certain departments.

For example, the hospital currently has 11 infusion therapy chairs. In the tower, where they have been moved, there are now 33.

When the original plan was formed, the current tower was supposed to be two towers — a cancer building and an academic building.

That blueprint has since changed.

The clinical research areas will include new programs the hospital is starting, including a number of new fellowships in psychology and cardiology, among others.

There is also a shell floor for expansion and a 9,000-square-foot simulation center in the tower.

“We wrestled, over time, about what’s going to go in and what’s not,” Sable said. “One example is, we had a small pediatric hematology/oncology program that was actually through a professional services agreement with Rutgers (University). With the advent of the merger with Hackensack Meridian … we recruited two doctors here, but part of the group at Hackensack Meridian University Medical Center. When we did that, that strategy necessitated a different footprint in the building. We also had to figure out how to lay out the program. Initially, (that department) was planned right next to (pediatric) infectious disease. We realized maybe it’s not the best to take immune-compromised people and put them next to infectious diseases. So, we moved it to its own area of the floor, separate from everything else, and we made it larger and allocated more space to it.”

The whole building has an added benefit — it could soon be a regional campus for the Hackensack Meridian School of Health at Seton Hall, which is currently in Clifton and Nutley.

“The curriculum is not the typical two years in a classroom and two years in the hospital. Very early on, they are going to get exposure to the clinical environment,” Sable said. “As we ramp up our classes, we will have rotations down here.”

Which should help with the pending physician shortage — a number that changes depending on whom you ask.

“I think New Jersey is the issue. We are trying to keep doctors in New Jersey. So, you can argue about whether there’s a doctor shortage across the country and use of midlevel providers and what your stance is on that. But for a lot of reasons … people tend to leave. So, we find ourselves in certain specialties there is a real shortage of doctors,” Sable said.

The building also includes a whole floor of conference rooms and the John K. Lloyd auditorium, named after the health system’s co-CEO in honor of his decades of service to the region.