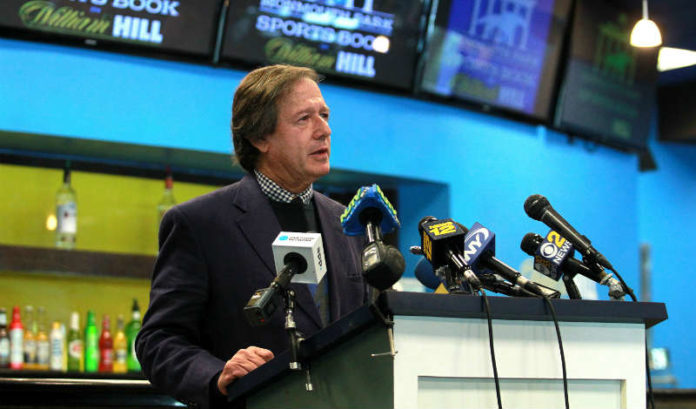 Sports betting may be legal now in New Jersey, but getting the word out is going to be a new battle for racetracks and casinos.

At least during live baseball games.

Major League Baseball has informed teams and networks that they are not allowed to accept advertising from sports betting operators, such as Monmouth Park, according to a June 8 memo obtained by ROI-NJ.

“We have been informed that club television and radio rights holders are being approached by sports books to place advertising/enhancements. Pursuant to MLB policy, clubs must inform their rights holders that they are presently not permitted to accept such advertising,” Dan Halem, deputy commissioner and chief legal officer, said in the memo.

“Clubs may not at this time enter into any relationship with a pure sports book, or with a casino with a sports book to the extent that the arrangement involves sports betting. Commissioner (Robert) Manfred intends to address at next week’s owner’s meeting the process we will follow to develop appropriate policies in this very complicated area.”

The memo from MLB was addressed to all clubs, marketing executives, counsel and broadcasting directors. The restriction outlined in the memo is a strategy often seen in Europe, especially during soccer matches, to advertise sports betting sites along field perimeters and on commercial breaks during the broadcast.

Since teams contract directly with certain channels to air their games, the memo directs them to restrict the airing of sports wagering ads on those channels.

The memo could be the result of the ongoing tension between the leagues and the state, according to a Monmouth Park spokesperson.

In the original version of the sports betting legislation that Gov. Phil Murphy signed Monday, the bill allowed leagues — which were the reason why the legal battle dragged out against the state for seven years — to take a cut of bets in the form of fees.

That was erased, and language barring anyone with connections to the leagues or teams was softened. The final draft of the bill allows anyone with less than a 10 percent stake in a league or team to be excluded from restrictions, and bars any entity with a 10 percent or more stake in a league or team from placing bets within that league. They are, however, allowed to make bets on other leagues.

This also was referenced in the memo.

Monmouth CEO and President Dennis Drazin said he bought advertising space for his law firm, with the understanding that, if sports betting were legalized, he could convert that into advertising for the racetrack.

“Even when I’m trying to go out there and do things that I think are important and help business here, they are they are trying to tie my hands here,” he said.

“They won’t let me advertise.”

This, despite beliefs that sports teams and leagues will benefit financially from the move to legalize sports betting.

Mark Cuban, the noted entrepreneur and owner of the Dallas Mavericks basketball team, said the value of top teams has doubled because of the U.S. Supreme Court decision in mid-May.

Cuban said in a CNBC “Squawk Alley” interview: “I think everyone who owns a top four professional sports team just basically saw the value of their team double. It can finally become fun to go to a baseball game again.”

Drazin agreed with the assessment.

“They have to appreciate that, by having a legal sports betting environment now in this country, your teams are worth a lot more money,” he said. “So, we should be working together instead of working at odds with each other.”

Drazin said he is now investigating if the memo qualifies as an FCC violation.

In addition, Monmouth Park is still suing MLB, and the other sports leagues, in district court to recoup, at minimum, $3.4 million in damages.

“This sum does not include other damages Monmouth Park has suffered as the result of having been prevented from accepting sports bets,” the court document said. “The leagues’ quest to prevent Monmouth Park from accepting bets on the leagues’ games and the games of others first began in 2012 and did not stop until the Supreme Court’s May 14, 2018, decision forced them to do so.

“During the intervening years the leagues’ actions nearly put Monmouth Park out of business, inflicted significant financial and emotional hardship on hundreds of innocent Monmouth Park workers and jeopardized the continued viability of New Jersey’s entire equine industry, including its many horse farms and related open spaces.”